Baby’s first Santa photo? Your little bundle of joy could either love hanging out with the jolly ol’ fellow or hate it (oh, the echo of little screams in a big shopping mall). For a picture-perfect outcome, try these quick tips that keep newbies cool, calm and collected during their first photo sesh with the Clauses. 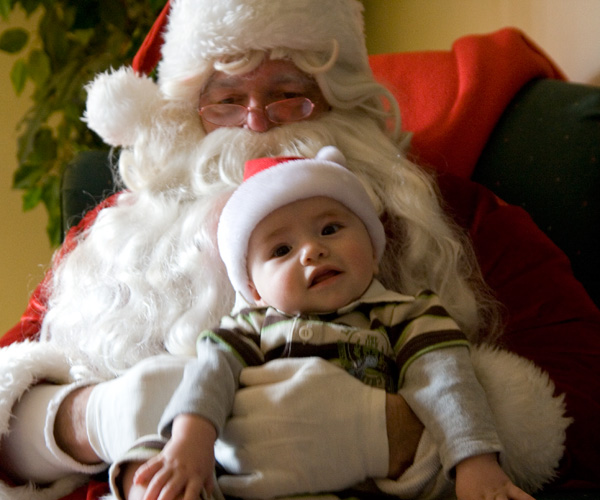 #1 Do a Trial Run
Practice visiting Santa — point him out from a distance, wave to him, say “hey!”— before baby has to actually take a picture with him. They won’t be old friends, but at least bambino will be familiar with that bearded face.

#2 Master the “Santa Pic Magic Trick”
If you think your little one will completely freak out when he or she sees the big man in the red suit, try holding them facing you and backing them into Santa’s lap. Keep their attention on you as you back away; and that’s when the photographer should snap the photo.

#3 Dress to Impress
We’re talking to you, Mom and Dad … just in case baby wants nothing to do with Santa and you have to be in the pic holding your bundle. The last thing you want to be wearing is a frumpy sweatshirt covered in spit-up. 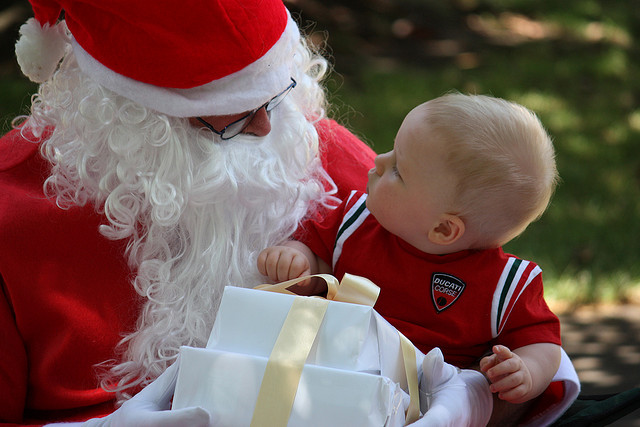 #4 Stand Strategically
Stand behind the photographer (especially if you’re resorting to all sorts of silliness to make baby look up). Posting up behind the picture-taker makes for great eye contact in photos.

#5 Ask Santa to Stand
If all else fails and baby just won’t calm down from Santa hysteria, ask the Jolly Old Man to stand behind the chair (throne?) for the photo with baby on your lap or sitting alone if he can. As a bonus shot, while he’s standing behind the chair, ask Santa to put his index finger over his lips in a “ssshhhhh!” gesture.

#6 Let Junior be Junior
So what if he doesn’t smile (or even look at the camera). Sometimes a what-the-heck-is-going-on expression is just as cute as a gummy grin. PS: No need to wake a sleeping baby; just let Santa hold her and then melt in the adorable-ness of the photo you get. 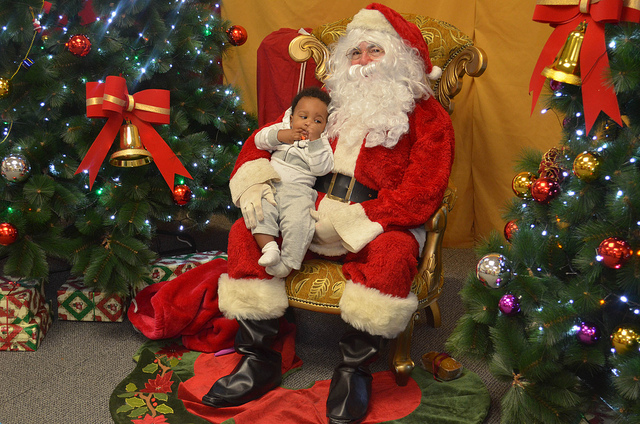 #7 Pack a Hardcover Book
If kiddo is afraid and cries … and cries and cries, you can still get a really cute picture by giving Santa a book to look at. If the photographer is quick, they’ll catch an awesome image of Santa and baby looking at the book together. #Swoon. The best part: If baby is crying you won’t even be able to tell.

#8 Distract With Tape
Squirmers will instantly chill out on Santa’s lap if you wrap a piece of tape around their finger before picture time. The tape is just distracting enough that your wiggle worm will forget he is indeed sitting on a funny-looking man’s lap.

#10 Sleep
Don’t go see Santa as nap time approaches. A sleeping baby is cute. A wailing baby is not cute. 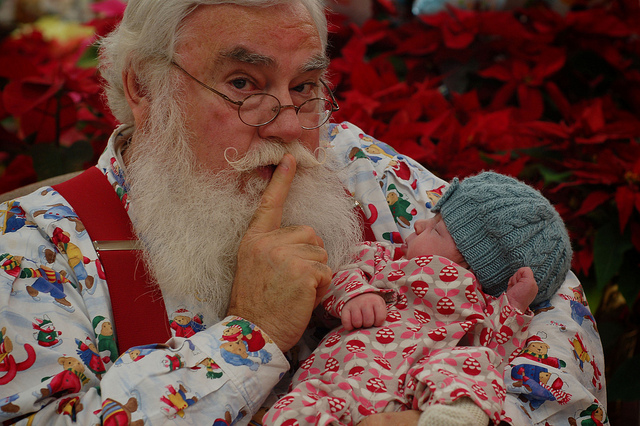 Do you have any other tips for scoring a cute Baby’s First Santa Visit photo? Dish in the Comments section below.