Get in gear, everyone. May is National Biking Month and a great time to introduce kids to the joys of wheeling around town. There’s a lot to know before you head out there. To get you on the right path, we flagged down the fun family that runs Heritage General Store, a bike shop and cafe in Lakeview, and asked how they roll. 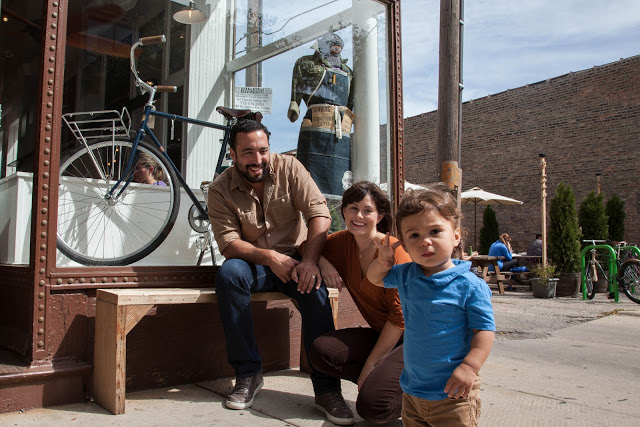 Heritage’s Mike and Melissa Salvatore enjoy pedaling around Chicago with their two-year-old son, Bennett. For them, urban cycling with children is no sweat. They even started an extension of their business called Heritage Littles, which has biking products and a balance bike for early riders. Read on for Mike’s advice on everything from must-have gear to the city’s greatest scenic routes. Then head out there!

Red Tricycle: Why is Chicago such a great place for family biking?

Mike Salvatore: The terrain is mostly flat, which makes it easier when you have kids along for the ride. There are also great urban bike paths, and on top of that the city is really committed to improving the cycling infrastructure, and all the local bike shops dedicate themselves to the industry.

RT: What is your favorite city bike route?

Mike: Hands down, it’s the lakefront bike path. On weekday mornings around 7:00 am, you can often see Bennett and I riding to the beach from the shop. I have my cup of coffee and we spend the morning on the beach relaxing, listening to music and watching everyone commuting to work. It is the best way to start the morning — hopefully for both of us. On our way to the path from the shop, it’s hustle-bustle with traffic on the busy city streets. Once we’re on the path the scenery changes, and we enjoy taking in the view of everything from statues to wildlife.

RT: What are your favorite stops along the lakefront bike path?

Mike: If you get bored of being right along the lakefront (which is impossible!) you can take a detour through Lincoln Park Zoo, the Lincoln Park Conservatory or Peggy Notebaert Nature Museum. Or go further south to Navy Pier, Grant Park and the Museum Campus. 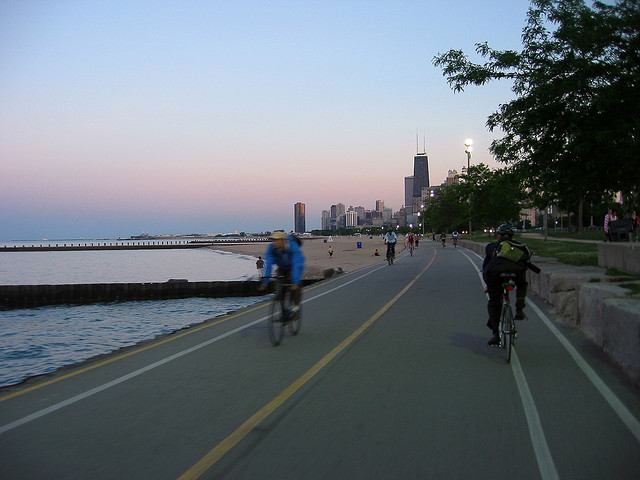 RT: When you venture beyond Chicago, where do you go?

Mike: McHenry County northeast of the city has some really great paths. We like it for the mix of environments — everything from open prairieland to forests.

RT: Any tips for parents wanting to ease into city biking?

Mike: Try to be comfortable and confident. You can do that by starting out in controlled environments, like bike paths, and gradually move to the city streets. Know the rules of the road and ride defensively. Most important, enjoy the ride and try not to think about how quickly you can go. Instead, think about how much fun you are having riding a bike instead of being in a car.

RT: What kind of gear should you bring along for the ride, if you’re setting out with kids?

Mike: Helmets, for sure. I like Yakkay helmets for kids. When Bennett rides along, he sits in an iBert bicycle seat, which are great for toddlers. Kids that are learning to ride can benefit from balance bikes, which don’t have pedals and go as kids scoot themselves along. We’ve made our own called the Bennett Balance Bike. If you’re going out for even a quick ride, having water is a must, and even snacks like Cheerios. For longer rides of an hour or more, kids may need a headrest, blanket and of course more snacks! Whatever you do, also bring along a change of clothing — but that’s already a general rule of life with kids. 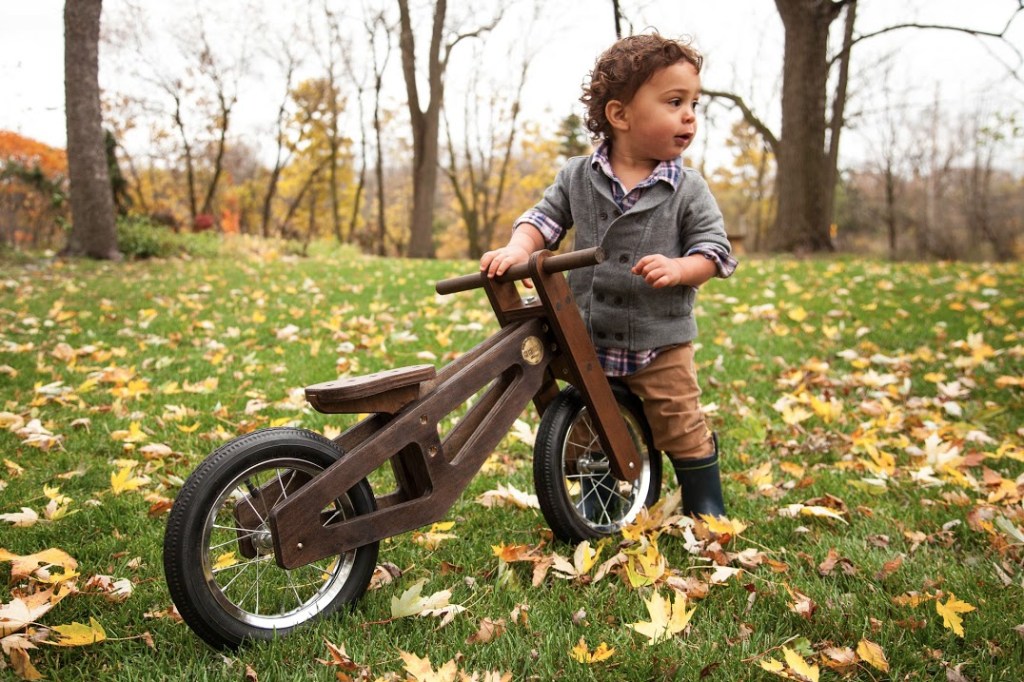 RT: What are some of your other favorite local biking resources?

Mike: The Active Transportation Alliance often lists events that are family friendly. You can also check out thechainlink.org for an exhausting amount of cycle-centric information. There’s also a monthly family bike ride organized by Kidical Mass Chicago, which is a great plunge into the subculture of family cycling.

RT: What do you like to do, besides biking?

Mike: We’ve started a photo studio for kids and families called A Little Photo Studio. Melissa is a photographer and the business has developed organically since Bennett arrived. Kids have a way of making sure your world is always evolving!

Thanks, Mike. All this all adds up to a pretty amazing ride for the Salvatore family. You can get in on the fun, too. Get equipped with cool cycles and gear from Heritage General Store. And remember that the shop is also a cafe, so you fuel up with a juice and sandwiches before your big trek.

Where do you like to bike with the family? Let us know in the Comments section below.