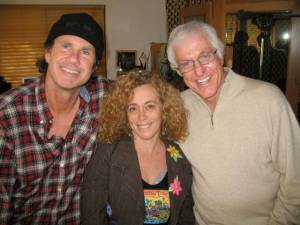 known for banging the drums silly as part of one of the world’s most beloved rhythm sections—he and the inimitable Flea provide the bottom for the Red Hot Chili Peppers’ megahits. But the Peppers took a hiatus in 2008, and most of the members spent that time, instead of playing for screaming fans, playing papa to their little ones. Lead singer Anthony Kiedis had a son, Flea was playing papa to his daughter Sunny Bebop (mom is model Frankie Rayder). Smith, however, has them both beat. A father of five, he took a break from his supergroup project Chickenfoot (with Joe Satriani, Van Halen bassist Michael Anthony, and Sammy Hagar) to work on a children’s album with Leslie Bixler. The result is The Rhythm Train, a rollicking rhythm-based collection of fun songs that won’t drive parents batty. The album even features some guest rapping from…Dick van Dyke?! It may seem a long way from “Californication” to “Roly-Poly in My Guacamole,” but for Smith, the project was fun and exciting in a new way. A self-described “big kid,” Smith took some time to talk to Red Tricycle about his projects and life as a dad.

RT: Thanks for taking time to talk to us, it sounds like you’re busy!
Smith: Yeah, we finished recording the new Chili Peppers album, which is really exciting, and now we’re just mixing it, and it should be out at the beginning of the summer.

How did you get 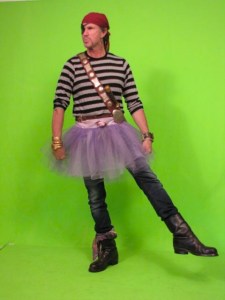 involved in making a kids’ album?
Leslie Bixler is a music teacher at my son Cole’s old preschool in Malibu, and she’s just great. She’s put out albums of her own. Anyway, it just stemmed from the way she saw me interacting with the kids at the school. Having kids, you know, you need to parent them, but it brings out the childlike side of you, the need to play. I certainly have that!

Anyway, we just hit it off and she said, “You have a great personality for a kids’ album, you should help me out with this,” and it just went from there. She and her husband Bill, who’s also a recording musician, they have a studio at their house, so it was the three of us hanging out there, and the whole thing was Leslie’s vision—that there’s this rhythm train and that it can go anywhere—around the world, outer space, underwater. We would try stuff and it would work really quickly.

This album is full of the stuff kids love.
The themes on the album are sort of universal kid things—pirates, dinosaurs, trains…Leslie’s worked with kids a long time and she just knows what kids like. She also has a son, Robin, who’s a little bit older (he’s about 13 or 14 now) and he helped to write some of the songs. The story has to work in a way that holds kids’ interest, so you have to keep it moving. The concepts were more hers; I helped with the music.

How did your kids inspire the content of the album?
My son Cole was so into trains as a little kid, so the song “Cole’s Trains” is for him.

How did you get Dick van Dyke involved?
He and Leslie have been friends for years, and he was up for anything…he was up to try to rap! He wasn’t the greatest rapper, but he was game to try it! He’s 84 years old and still so sharp and funny.

Tell me about your involvement in children’s charities?
Right now I’m really into supporting the Silverlake Conservatory of Music. It sounds highbrow, but it’s a great place for kids from all backgrounds to learn about music. Flea started it, because he just saw how music was being cut from all the public schools. About half of the 700 kids there are on scholarship, and it’s not like American Idol or anything, the kids are learning how to play instruments, and learning the importance of practice.

When did you start playing?
When I was seven! And I’ve been so fortunate to find my passion at an early age and do the things I’ve done in my life because of music.

What do you say to the kids you meet who look up to you as a musician?
I’ve been really lucky to meet and even play with some of my idols that I grew up listening to, and for the most part it’s been really humbling and positive.  I just try to encourage kids to work hard at it, to inspire them to put in the time, effort, and work. If you really love it and want the knowledge, instead of just wanting it NOW, then you can get great at it.

I do have to say, though, that I met Travis Barker from Blink 182 and when he told me that he started playing the drums to Mother’s Milk (RHCP’s 1989 breakthrough album), I thought “GOD, I’m OLD!!”

What are you listening to these days?
Well, I have to listen to Red Hot Chili Peppers all the time right now, because we’re mixing! But, I went to see this guy Yelawolf the other night, who just got signed to Shady Records, Eminem’s label. He’s a rapper from Alabama, and though I haven’t been a huge hip-hop fan in recent years, this guy was great! I met him after the show, and he was a sincere and cool guy.

What do your kids listen to?
They like Led Zeppelin, Stevie Wonder and old 70s funk, and they like the Foo Fighters a lot. The song “the Pretender” is their favorite song, they listen to it over and over…I guess it could be worse! Taylor Hawkins (the drummer) is my son Beckett’s godfather.

Do you take your kids to live shows?
We just did Thomas the Train Live at Madison Square Garden—Beckett, who’s 2, is into trains. And I want to take Cole to the Lion King.

What do you do on a perfect day with your family?
We are in New York most of the time now because Cole is in school there, but we go back to Malibu when we can. He misses it, that’s what he knows. We’re going back for 2 weeks over spring break and having a big party for his birthday. We love the beach, and we’re fortunate to live in a neighborhood where the kids can run around, jump on the trampolines, and play outside. And my kids love to play with Legos, Star Wars stuff, and do art and drawing.

Will they play an instrument?
I don’t know…Cole does have a music class and he plays a few things that we have around the house…drums, guitars, piano, etc.

Doing any shows for Rhythm Train?
No, Leslie and Dick did some in-stores when it first came out, but we can’t tour right now.

Are you taking your kids out on tour after the new Chili Peppers album comes out?
Well, Cole was on part of our last tour, he’s been lots of places. And we’ve already got some shows scheduled this summer—one in August in Hong Kong, Rock in Rio, Summer Sonic in Japan…we all have young kids and we hope they get to go…we’ll make it work!