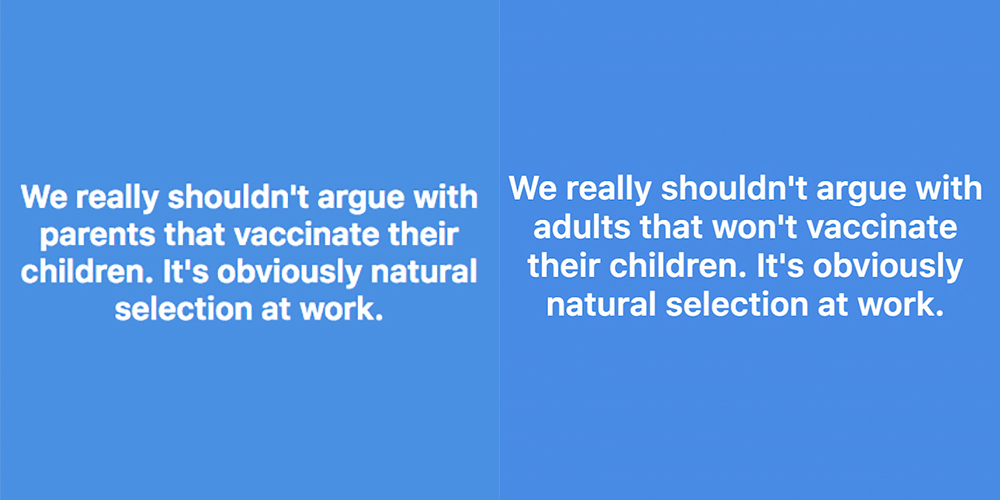 There are, like, these rules. They’re important. They dictate polite conversation. At dinner parties you don’t discuss politics, salaries or religion. I think that rule was made by housewives 60 years ago to keep husbands from getting into heated discussions over bridge games and dinner parties.

Those housewives didn’t have the Internet or they’d have added in a few things to that list. Nowadays, when you’re in a mommy forum, there are three things you don’t discuss unless you’re trying to start a mommy war: Formula vs breast feeding, circumcision and vaccination. Or, if you prefer the “hip mom” lingo: Lactivism, intactivism and anti-vaxxing.

I’ve seen the mommy wars start very innocently. Someone asks a newbie question on a forum, like: “I really want my son to look like my husband, is circumcision really going to hurt?” Half the mommies will start freaking out about mutilation, the other half will start freaking out about the unsolicited advice. “She wasn’t asking if it’s mutilation, she was asking if it’s really going to hurt.”

Breast is best – unless fed is best. Vaccines don’t cause autism – but do vaccine injuries exist? Or is it a small risk to take compared to catching a totally avoidable disease? Herd immunity. Natural selection. Adjuvant. Attenuated. Big words, scientific concepts and scare tactics all rolled into a huge, opinionated argument ready to rage.

I have read and read and read through these mommy wars (fine, I admit it, I enjoy a certain amount of drama – as long as I’m not at the centre of it) and it never ceases to amaze me that the same arguments can go round and round in every single mommy forum and every Facebook group out there. My husband and I were chatting about the measles outbreak on the weekend, convicted in our decision about vaccines, discussing that only time will tell if we’ve made the right decision, but we stand by our decision.

My husband usually posts pictures of our kids on his Facebook, or Star Wars products. Sometimes a rude joke or a funny sitcom reference. My favourite are the old music videos he digs up.

He doesn’t post controversial stuff. I think my mommyblogging is rubbing off on him or something. He always reads my posts (Hi honey!) and I do talk a lot about mommying and daddying – parenting. We’ve made all of the big decisions together and he’s very invested in all of the choices we’ve had to make for our boys, so I respect the fact that he has an opinion on this.

I never would have posted that status. But I sure was interested in seeing how it went. I don’t think he’s ever been part of a mommy war… er… daddy war… so I thought it would be interesting to see how his feed wound up throughout the day.

And there it was. The first response. And then the second. And then the third, fourth, fifth and sixth. One person posted numerous scientific studies about the negative effects of vaccines. Another person called him an idiot.

My husband jumped in to say, “Guys, there’s no reason to be rude about this.”

And then they all apologized to each other and agreed to disagree.

And, as if that weren’t enough, the next day he – being the equal opportunity troublemaker he is – posted another vaccine/natural selection post. The same people showed up to the party, plus a few. Again, civility won out, though 160+ comments later and people were laughing and egging him on to post a status about whether pineapple belongs on pizza.

I will never understand.

I’ve seen mommy wars go 972 comments deep before the moderator could shut it down. I’ve seen bans and escalating insults and even seen people take arguments into real life. I’ve seen friendships end and loyalties divided over vaccines, so I’d grabbed some popcorn and settled in for some amusement on my husband’s Facebook page. But within 22 comments they’d hashed it out and banded together for a round of Kumbaya.

It never ceases to amaze me how my husband surprises me. And so daddy wars?

A professional editor, writer and blogger, Elisa is a mom, a wife and the co-founder of UrbanSuburbanMommy.com. When not busy investigating the most interesting angles of parenthood, she and her family can be found taking over the world, one playground at a time.