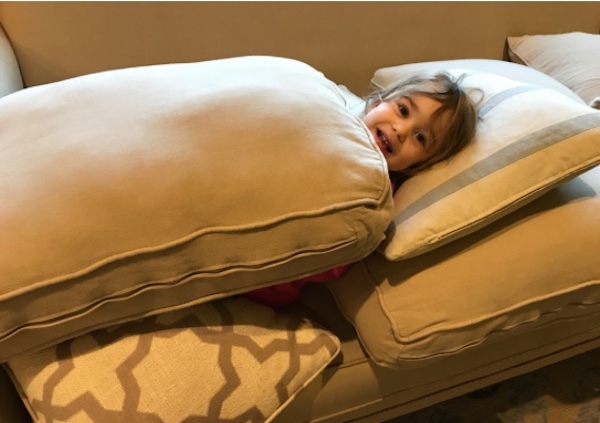 Dear Couch, You probably overheard me talking about you when the company was over this past week. I didn’t mean it really. Okay, I did. But we don’t actually have any concrete plans to get rid of you. I was having a moment, ashamed by your tired looks, your ragged edges and your blotchy arms. I know that sounds harsh. Being beige, you hide it quite well, so I shouldn’t complain.

You probably wish you could say a few things about me, too, and pass the blame. And I deserve it. So do my kids. I know these words are overdue, but after the slam I let slip last night, I suddenly feel the need to apologize and say thank you for putting up with us. Over the last decade, we have lovingly abused you. And you allow it. Okay, okay, Mom allows it.

No matter the season, but especially during a long, rainy Atlanta Spring, you provide a shelter for endless entertainment. Be it a poorly engineered fort, an Amazon-delivery train, a tunnel to somewhere or Santa’s gravity-challenged sleigh. You truly are the only one who can compete with the cardboard box for the title of the original Transformer toy. (Sorry to bring up the competition.)

Without complaint, you indulge my children’s imaginations. You’ve convinced me behind every creative wunderkind, there’s a good, solid couch like you. In fact, the Harvard Crimson reports Mark Zuckerburg sat on a ragged couch in the common room during Facebook’s early years. Oh, how I wish that couch could talk! I bet that raggedly ole thing had more to do with Zuckerburg’s success than any Harvard education. After all, the whiz-kid dropped out. I’m telling you, that couch deserves a mutli-million-dollar reupholstery job. I picture it bejeweled and trimmed in golden tassels. Or better yet, a new outfit: a stainless steel slipcover à la Ron Arad.

On second thought, it doesn’t take jewel-tones, tassels or custom slipcovers to be loved. I fondly remember the couch I grew up on. Its soft, rust-colored coat must have been made from the hide of Sesame Street’s Snuffleupagus. She was a beauty in the way only odd-colored couches can be. Like a battered puppy, she gave in to my petty demands: “Stay here!” I can hear me saying now, as I placed one cushion on top of the other to create my escape from Tornado Ted as we affectionately called my brother. She was one loyal friend, and I was sad to see her replaced by the ’90s trends. That magenta and teal love seat just wasn’t the same.

You, my beige friend, are as good as gold. I won’t tarnish your name and divulge every detail about all the other stinky stuff. But honestly, it speaks to your humility. I mean, who else would take the constant absorption of a family of four children’s toots? And only God knows how many times you endured the fully loaded burps, the barfs, the… I’ll stop there, because I don’t want to embarrass you and I want the neighbors to still want to come over. Besides, we’ve un-zippered, washed and zippered you back up again at least a dozen times since. I realize you may have shrunk a few sizes and developed bad posture in the process, but trust me, it was well worth it.

Seriously, though, I must thank you for being my sleepless-night companion during four long pregnancies. You didn’t brag about it. You just waited for me no matter the hour, selflessly providing a soft, flat and firm alternative. For this, I’m eternally grateful.

Oh, and about that picture I took of the designer velvet sectional… It sounds a lot worse than it is. She may look good–actually, she’s quite stunning. But what you lack in looks, you make up for in character. So don’t worry, she’s not coming over any time soon. For one, I don’t think we can afford her until the kids graduate private school, or better yet, my literary agent writes me back with a life-changing deal. In the meantime, I’ll take your beige any day of the week–rain or shine. Just don’t expect that blue-velvet upholstery job you’ve been wanting any time soon.

A former CNN journalist, I created Mommipop, a destination for moms. A mother of four, I now write and share the parental pep talks, the sisterly pick-me-ups, and the intellectual tickles every sleep-deprived mom craves. Mommipop stories put the “pop” back in mommihood, because everyone is better when mom is in a Mommipop state of mind!