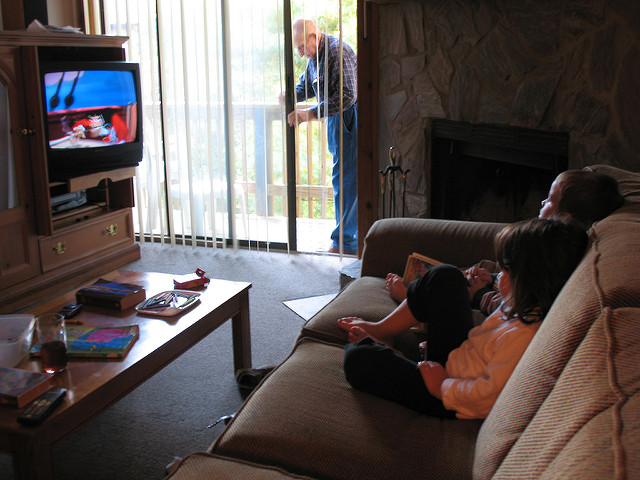 Screen time.  It can be such a hot button issue. Studies have shown that too much isn’t good for kids. A lot of us can see from our own experience that our children’s behavior declines from too much TV.  But let’s be honest- screens are everywhere and aren’t going away any time soon.  Kids see adults using different electronic devices nonstop. I know my son’s first two years of life were spent in the office, with us using computers. Yes, they were for work purposes, but they were screens nonetheless.  We love our screens, specifically TV.  I don’t know many young kids who don’t like a good TV show or movie.  I also don’t know many parents who don’t appreciate the respite it can give us at times. The thing is, there are times in life when we need that break. We need the power of the TV to keep our kids distracted, safe, and happy.

I have had a few big times when my son watched too much TV. The first big time was when I was in my third trimester with my girls. This was also in winter in the Midwest. Snow, cold, and a giant belly? You can bet we let our son watch some extra TV.  I was just too big to get down on the floor and do a ton with him. Plus I was a wee bit on the tired side of life.  We ended up letting him watch more shows so I could get more downtime to sit.

Then the girls were born. Life with a newborn can be a bit of a survival situation. Life with newborn twins and a toddler is for sure. First of all, newborns keep you busy with all the attention they need.  Second, I spent most of my day on the couch nursing babies. I wasn’t able to master the stand and walk around when nursing one baby, and there was no way I could do it with two. So we were couch bound. I did pin all sorts of ideas for busy bags and ways to entertain toddlers while nursing. Honestly, he was not interested in any of my plans. Helping both girls nurse took up almost all my focus too.  So the TV would go on. My son was just under 2.5 when the girls were born, not an age where I wanted him wandering the house or getting into things on his own. TV kept him happy and safe, right next to me on the couch.

As the girls got older and better at nursing the time spent just feeding them got shorter. But then we decided to move across the country. My husband had to get there earlier than us to start his job, so that gave me three weeks to pack up the house with the kids. We all know how hectic packing can be. Boxes everywhere, things getting sorted and moved around, not to mention all the things that are normally kept tucked away coming out to be packed up. The girls were still sleeping in our room, so I couldn’t even use nap times to pack places I didn’t want little ones in.

Enter the TV. Once again, some shows kept my son safe and happy while I ran around like a crazy woman. Oh, and towards the end we had to pack up the toys.  What else was he supposed to do?  Then after all that packing and getting to our new place, we had to unpack. Same idea- I needed to get a ton done while keeping little ones safe and out of the way.

These are just my examples of when screen time became a major part of our lives. I’m not thrilled that my son spent so much time in front of the TV.  But you know what? It was for a relatively short period of time in the grand scheme of things. I do think there were a few benefits of all the TV watching. One is the obvious that I was able to get a ton done without ‘helpers’ slowing things down. I was able to make sure my son was safe and happy when I couldn’t play with him.

I was able to focus on getting good nursing sessions in with the girls while they were newborns. And I was able to rest as needed through the end of my pregnancy and the early days with the girls. TV gave me a chance to mentally recharge during a very busy time of life. I think it also helped my son with the move. The characters on his shows became his friends, and he was able to take them with him on his move. It gave him some consistency during a time of major upheaval.  He got not one but two new siblings, and then six months later moved to a whole new state.  That is a lot for an adult let alone a two year old. Knowing he could relax and still have something familiar with him gave him a sense of constancy in a changing time.

Okay, so we had some really good reasons to over-do the screen time. That doesn’t mean I didn’t feel a ton of guilt about how often my boy was sitting in front of the TV. It also doesn’t mean I don’t feel guilt when I think back on those times. I do have a few strategies to deal with that.

1) Remember this is just a season. Having a newborn, a family member with an illness, moving, busy times at work. Theoretically these times don’t last forever.  They may feel like it, but the time passes and we either go back to normal or adjust to the new normal. You aren’t using the TV as a babysitter out of laziness or a desire to not do what is best for your child. You are trying to do what is best for the whole family, and sometimes that means a less than perfect pass time for your child. That doesn’t mean you don’t love your child.

2) Focus on quality. Just because your child is watching a lot of TV it doesn’t mean you have to give them free range to watch anything at all.  We made sure we always watched age appropriate TV. We did do a lot of fun TV. (I can still name recite the catch phrases for every member of the Paw Patrol.) Besides fun TV I tried to utilize as much educational TV as possible.  I really think a lot can be learned from these shows. Super Why is great for reading and letter recognition. Team Umizoomi talks about math concepts.  Daniel Tiger’s Neighborhood is awesome for emotional development. (Not to mention having several episodes on new siblings!)  Veggie Tales introduced religious ideas, while the Wonder Pets taught about team work. Sesame Street is still a classic. And Pinky Dinky Doo taught my son how to think through different the elements of a story. Yes, working on these concepts with an adult and without a screen would probably be best. But that doesn’t mean kids aren’t getting something out of these shows. You can find some educational apps and YouTube videos to watch. I would pause shows and talk about what we were watching while my girls nursed. TV can be a little bit of an interactive time if you watch it with your child.

It is important to remember that these times of too much TV don’t have to last forever.  Once you have passed the survival time in life, or just adjusted to a new normal, you can come back from the screen time!  I think there are two main ways to come back from too much screen time.

1) Cold turkey.  Just turn off the TV.  It can be hard, but it sends a fast message that you are serious.  I have found that going cold turkey means the transition back to less screen time is faster.

2) Step down slowly.  This is what we ended up doing.  I started cutting shows slowly.  I didn’t turn on the TV until later in the day and I tried to limit what we did watch to just after afternoon nap and during long nursing sessions.  I personally had a hard time turning off the TV too, not just my son!  Being in an all new place felt lonely, and the sound of the TV helped fill some of the emptiness as we adjusted to our new normal.  I was able to swap out shows, switching cartoons for adult shows that are still okay for children to see.  (Things like cooking shows or science and nature programs, etc. can still be fine for children to watch- no bad language, adult situations, or violence.)  These shows didn’t hold my son’s attention as much.  He usually looked at it for a moment, and then went about playing.  Having the TV still on limited some of his complaints about watching shows and made me feel less alone as a stay at home mom in a new state.  In time we all got our new routines going and were able to get the TV fully off.

Look, we all know we don’t want our kids just zoning out in front of the TV all day.  But sometimes life puts us in a place where we need to utilize it as a tool.  We all have times when we are in survival mode.  During these times we can focus on quality and choose to forget about quantity for a bit.  Once the season of craziness has passed, we can get back to normal and scale back the screen time.  You are not a bad mom because your child watches too much TV sometimes.  As my mom told me: If your worst parenting decision is too much age appropriate TV, you are doing just fine. 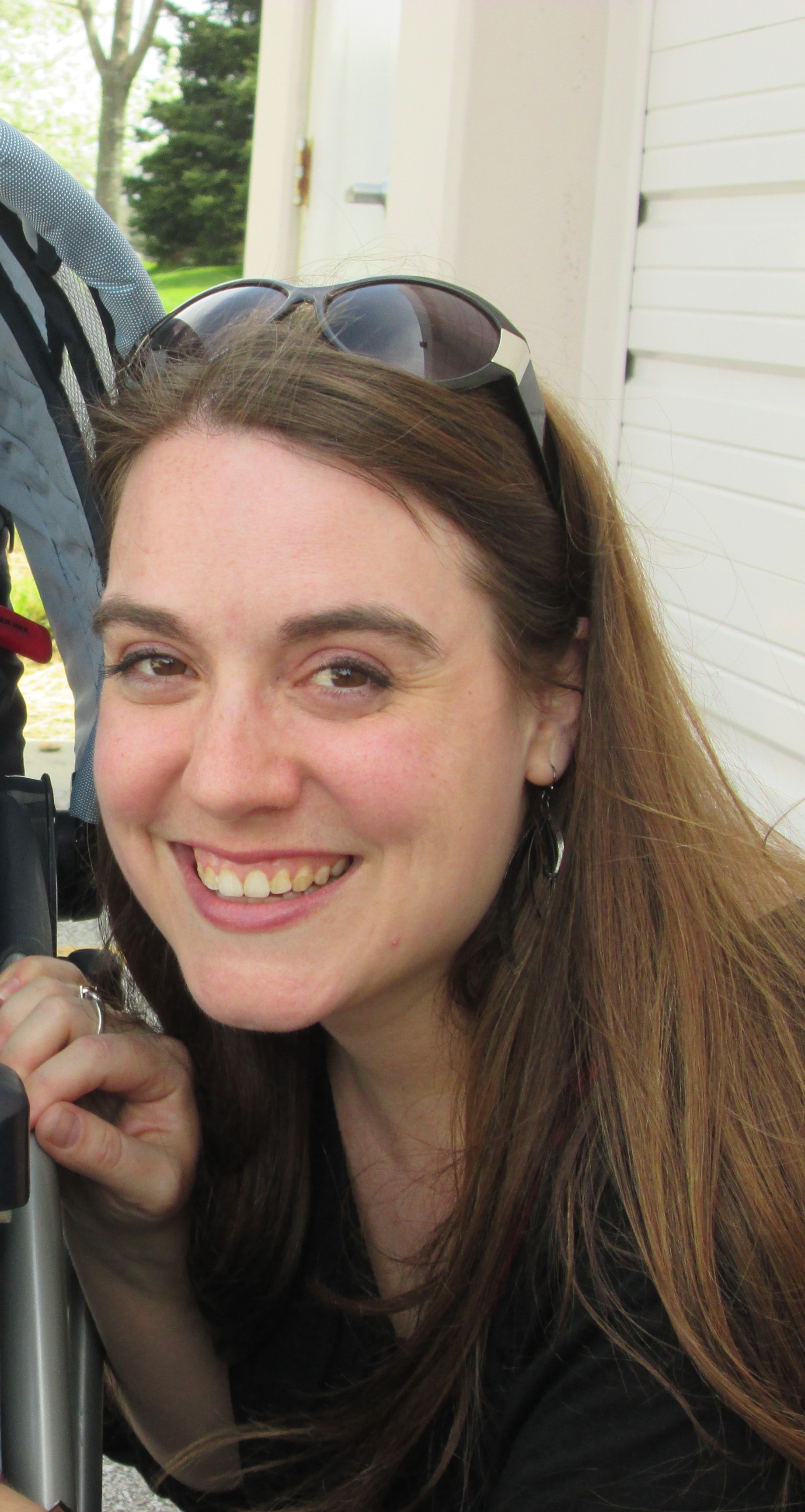 I'm a wife and a mother to three great kids- son and twin daughters. I work from home while I wrangle my three kiddos.  I enjoy reading, coffee, cooking, and spending time with my family.