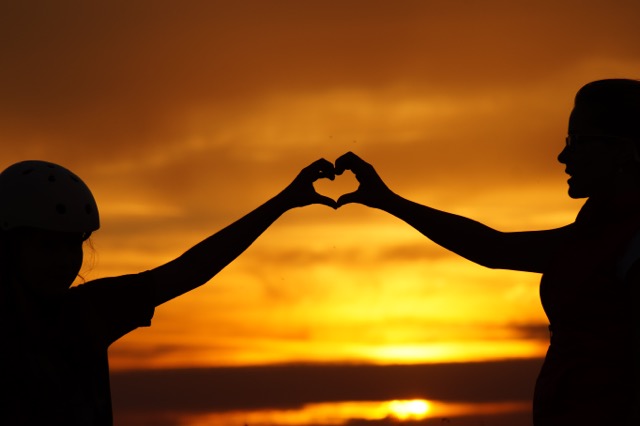 I’ve always been a “daddy’s girl.”  I know it sounds cliché, but it’s the truth.  Don’t’ get me wrong, I have a fabulous relationship and friendship with my mom too.  But there is just something special about dads and their daughters.  My own dad had only daughters, and with me being the youngest (and also somewhat of a tomboy), he and I developed a special bond over the course of my life.  Because of this bond, I tend to hold my dad in very high regard.  I strongly value my dad’s opinion.  I want him to be proud of me.  I want to live up to his standards in every single aspect of my life.  Having a strong type-A personality, this has become even more difficult for me since I entered the world of motherhood.  As every mom knows, there just isn’t enough time to do everything the way you want to do it or the way you used to be able to do it.  I can’t keep my home as clean as I want, my yard as pristine as it used to be, my bills always mailed on time, or my junk from spilling out of the closets.  And I’m embarrassed and frustrated by it every single day.  I worry what my dad thinks when he notices it all.  Will he be disappointed that I can’t do everything he was able to do with seemingly such ease?

A perfect example begins a few months ago when I went in search of a replacement for our hideous kitchen chandelier that was left by the previous owners of the house.  I’d lived with its ugly, shiny, brass finish for almost seven years, and I was determined to finally get rid of it. I did my research, I visited more hardware and lighting stores than I knew existed, and I finally settled on one.  I somehow managed to eventually get to the store kid-free to purchase it (forgetting the lightbulbs I needed, of course), and stashed it in my car, full of excitement.  I broke open the box that night and flipped through the installation booklet…..and that’s where the chandelier has been sitting ever since.  In that box.  For almost three months now.  Because I haven’t found sufficient time to install it.

Then one day, I decided I wasn’t waiting anymore.  I lugged the box back out of the spare bedroom, blew the dust off the top of it, and skimmed through the installation instructions again.  I charged the drill, and announced my plans to the world – including my dad – to get it put up that weekend.  As happens all too often these days, that weekend came and went.  The light is still in the box.  The old, ugly, brass chandelier is still gracing my dining room table with its dull yellow light every evening at dinner.  The Monday after my proclaimed “get it done” weekend, my dad sent me a text message. “How does the new light look?”  My heart sank.  I knew he was trying to be supportive and excited for me, but now I had to tell him that I failed to get it done.  Again.  Like everything else.  The day I had set aside for the installation ended up being beautiful weather, and I made a last-minute decision to take my toddler to the park instead.  Meaning that the new chandelier never even made it out of the box.

I responded and told my dad that it was still all boxed up; that we had decided to go to the park instead.  I also sent the emoji of an ashamed face.  However, in true dad fashion, my father sent the exact response that I needed to hear; the response that reminded me why I thought he was such an amazing dad in the first place. “Things like the light can wait.  A nice sunny day won’t….He will grow too fast so spend time with him.”

Tears filled my eyes as I read his message over and over.  My dad wasn’t at all disappointed that I failed yet again to get something done.  In fact, he was proud of the decision I made, and would have probably made that same choice himself.  Getting that stamp of approval from him meant more to me than any satisfaction I could get from checking a task off my list or ridding my dining room of that atrocious chandelier.  As I ran around the backyard with my son that evening, I replayed the text conversation over and over in my mind.  My thoughts eventually wandered to something I’ve heard my dad say a million times over the years: “Kids don’t care how much stuff you give them or how much money you spend on them; they care about how much TIME you spend with them.”

My mind wandered further, and it dawned on me that these words of his were the exact reason I had always thought my dad excelled as a parent.  He was always there for my sister and me.  He was at our baseball games and dance recitals, coaching our teams, helping us with our homework and getting hit in the shins as he helped us perfect our softball pitches, making us breakfast and getting us off to school, attending special school functions and ceremonies for our awards, planning picnics at the park and bike rides through the neighborhood.  More often than not, he did all of this on only a few hours of sleep, after working the midnight shift on an assembly line.  My mom left for work a mere three hours after my dad got home, and he left for work two hours after she got home.  Yet the two of them rarely missed a beat.  Sure, we may not have had the biggest and best of everything, had the most expensive or coolest brand names all the time, but none of that even makes me bat an eye now.  Guess what I do remember and cherish though?  All the TIME that they spent with me.

As I refocused on the present and listened to my son laughing and squealing in delight, I knew my dad was right.  This time I was spending with my toddler was far more important than that kitchen light, or those dusty shelves, cluttered closets, and dust bunnies.  My son would never think twice about any of those things.  But years down the road, he will still be thankful for me running around the yard with him making silly animals noises, or taking him to the park to splash around in the stream together.  The look on his face and in his eyes proved that to me.

Later that night, I pulled out my phone and reread my dad’s text message.  I took a screen shot of it and saved it to my favorites.  Now and again, I pull it up and read it to give myself that much needed reminder.  When I’m feeling disappointed in myself once again, or conflicted over a decision, I remember my dad’s simple, yet profound wisdom: spend time with your children; it goes by too quickly, and they will remember it more clearly and appreciate it more fully than anything else you can give them in life.  It has become a bit of a motto for my parenting st‌yle, despite its apparent simplicity.  Because if my son someday feels the same way I feel about my own dad, I will consider myself a successful parent (even if my beautiful new kitchen chandelier is still in its box when he graduates from high school).

My husband and I welcomed our first son in June 2015 and joined this crazy roller coaster of parenthood. I am a working mom who enjoys running, healthy cooking, and the outdoors. I'm tired of this judgmental mom world and would love to find ways for moms to support and encourage one another instead of competing.