When is a walk in the woods, not just a walk in the woods? When you’re on a secret treasure hunt, of course. Say hello to Letterboxing! A fabulously fun activity that’s part pirate treasure hunt and part crafty stamp session peppered with a little 007 stealth, of the Sean Connery variety. Intrigued? We thought you might be. Letterboxers use cleverly crafted clues to hunt for hidden boxes that contain a hand carved stamp. Sounds easy, right? Remember. James Bond. This seemingly simple hobby has layers yet to uncover, but we’ll get to that. So, grab a stamp and some ink, get a clue (literally), and read on to find out how to go on a letterboxing adventure! The 411
At its heart, letterboxing is an old school treasure hunt. Have map, (or in this case online clues) will seek. But it’s more than that. The art of crafting both stamps and clues is part of its quirky appeal. Clues can be as straightforward as walking three paces north of the birch tree, or they can be mind-bendingly (like you just stepped into the Matrix) complex. Some witty wordsmiths even create ciphers that need decoding before you can begin the hunt. It’s like you’re starring in your own Dan Brown novel! That’s all part of the intrigue of this hobby. And just like the clues themselves, the letterbox location names are equally punny, and often serve as the first clue. Just surf over to AtlasQuest or Letterboxing North America to get your hunt started. We love the incredibly useful attributes key at AtlasQuest. It makes finding kid-friendly spots a cinch! With more than 20,000 letterboxes hidden around the country, there’s sure to be one in your neck of the woods. Letterboxing is all about the stealth, since many boxes are hidden in plain sight. And while you won’t need Harry Potter’s invisibility cloak, it’s customary to wait until the coast is clear before collecting a letterbox. This might be hard with the littles in tow, but they’ll love being in on the secret! Once you’ve located a letterbox, simply stamp your imprint into the letterbox’s logbook, along with your trail name, hometown, and date. You can also leave a little message or note if you’d like. And be sure to browse through the logbook to see who came before you. It’s a colorful passport of original artwork your kiddos will love. What you take from the site is the imprint of the hider’s stamp in your own notebook, and maybe a few stories or memories to share. Don’t be disappointed if you don’t find a letterbox on your first time out. It’s about the journey more than the find. And remember, if at first you don’t succeed… Let’s Do This!
Getting started is as easy as grabbing a stamp, a notebook, and a pen. Oh, and coming up with a trail name. It’s like your trucker handle (breaker, breaker!), but for families. Trail names are usually stealthily crafted to both reveal and obscure the finder’s identity. Paradox much? So, like Sting or The Artist Formerly Known as Prince, you too get to craft a moniker to define your family for the letterboxing masses. In the Letterboxing universe your signature stamp is your virtual identity, like a low-tech avatar. Many letterboxers hand carve their own stamps using white vinyl, green rubber or hard red erasers, all of which you should be able to find at your local art supply store. And while most don’t use store bought stamps, they’re definitely fair game, especially for beginners. Either way, you’re sure to leave a mark! You’ll also need a small notebook to serve as your letterboxing logbook, an inkpad, a pen, and a sense of adventure. Once your checklist is complete, you’re ready to start! 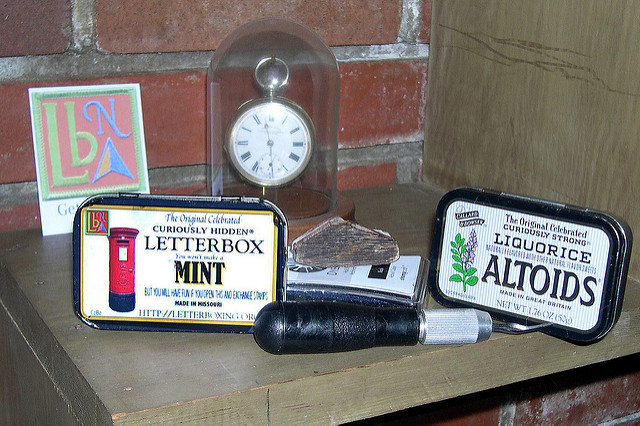 Ages & Stages
Kids and letterboxing go together like milk & cookies, peanut butter & jelly, Ross & Rachel… in the early years anyway. No matter what their age, it’s easy to incorporate your kiddos into the hunt. Pack the teeny-tinys in the backpack for forest finds, or stroll them along the city streets for urban letterboxing outings. Choose easy-to-find boxes with simple clues for toddlers and pre-schoolers. They’ll love counting paces, spotting trail (or road) side landmarks and finding the secret treasure inside the letterbox. Artsy kiddos can get their craft on designing and carving (be careful!) the family stamp. And curious kiddos of all ages can help decipher clues and look for landmarks. Be sure to get some practice first at the Letterboxing North America orienteering game page. Check it out  before your first trek. 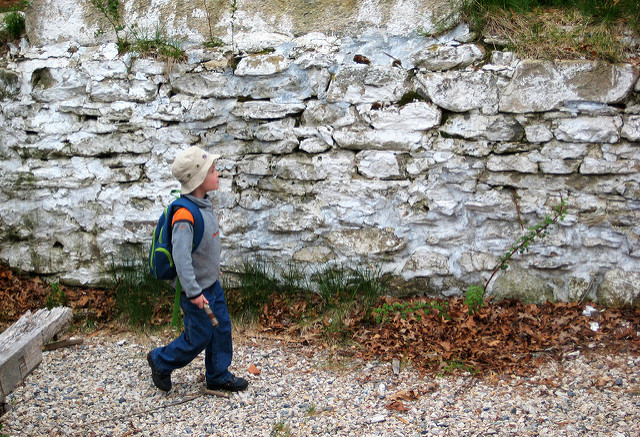 Beyond the Basics
Like Alice’s rabbit hole, the Letterboxing universe runs deep, and there’s much to learn beyond the basic find-and-stamp. As with most games, it has its own rules and lingo that compel players to keep on playing. In no time, your little letterboxers will be talking Hitchhikers (traveling letterboxes hidden within letterboxes) and Cuckoo Clues (a extra mobile clue hidden within a letterbox) with the pros. And soon they’ll be adding their PFX stats (place, find and exchange stats, like RBI’s in baseball) at the bottom of their finger paintings. But you’ll know they’re really hooked when they want to create and plant their own letterbox. There’s always more to uncover, if you’re game!

Ready to give Letterboxing a try? Share your favorite spots or adventures in the comments section below.