Nearly fifty years after a little band called The Beatles first sauntered onstage at The Ed Sullivan Show, The Grammy Museum offers fans young and old a rare opportunity to take a trip back in Beatle time.  On exhibit now through March 2014 is Ringo: Peace & Love, where visitors can get to know the beloved Beatles drummer and all his creative genius.  What’s that you say? You’re worried the kids will whine their way all the way through this nostalgic blast to the past, hustle you forward towards the exit to the iconic beat of I’m-bored?  We’ve got you covered. This isn’t your standard, stuffy don’t-touch-it kind of museum. Ringo has been inspiring kiddos to pick up their own drumsticks for years, and in this interactive exhibit he’ll even show them how.  So unless you’ve got plans to spend the day in an Octopus’ garden in the shade…Drum roll please! 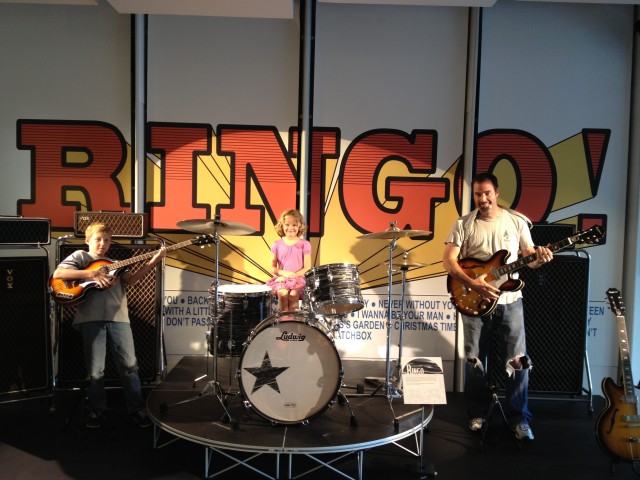 Drummin’ With A Starr
Sure this exhibit has some of Ringo’s original drum kits that you can ooh and ahh over. But if you’ve got kids that like to make some noise – and we gotta ask, is there another kind of kid? –  they’ll be happy here for sure. Let them trade up all that clanging-pots-n-pans-on-the-kitchen-floor practice for a turn on an actual drum set. Pull on some headphones and take a boom-chick lessons from Ringo himself as he appears on a video monitor mounted to the drum kit.  Will it launch them towards their own future as a rock-n-roll legend? Hard to say.  But we know they’ll have a whole lot of fun. 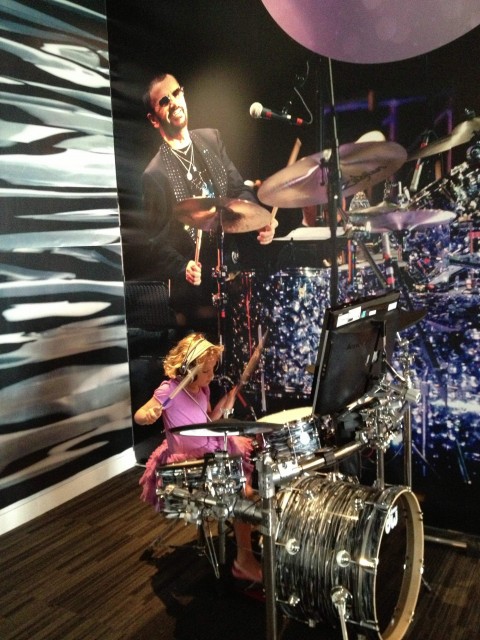 Sing In The Land Of Submarines
When they’ve had their fill of drumming and thrumming, your musical mighty mites can sail on over to the interactive recording booth and sing along with Ringo to Yellow Submarine. The booth will record their rendition, and play it back for them to hear. Kiddos can even listen to their isolated vocal tracks, just like the pros (By the way, we know you’re curious. Step into the booth and croon your heart out.  Go on, we won’t tell. )  Your kiddo more the behind-the-scenes type?  They can also visit one of the exhibit’s real mixing stations and take at crack at balancing  instrumental and vocal tracks of Ringo’s 1967 recording of “With A Little Help From My Friends”.  Best part? They’ll need very little help from Mom, leaving you plenty of time to explore by yourself.

Starr Stylings
It’s hard to imagine going through our closets and digging up old threads worthy of a museum exhibition – unless of course our wardrobes include an original pink Sergeant Pepper suit donned on the cover of one of the top selling albums in rock-n-roll history. (Yeah, ours doesn’t either.)  Here you’ll find that original hipster getup and other familiar Ringo garb, along with handwritten song lyrics, photos and video clips from the Fab Four’s coolest moments. There is even mockup living room where you can recline on the couch with your future rock stars and watch on TV that famous  Ed Sullivan show from 1964 when the Beatles first hit the American scene.

After a hard day’s night –er – afternoon of pipes n’ percussion with Ringo, what could be better than that? We can’t think of a thing. 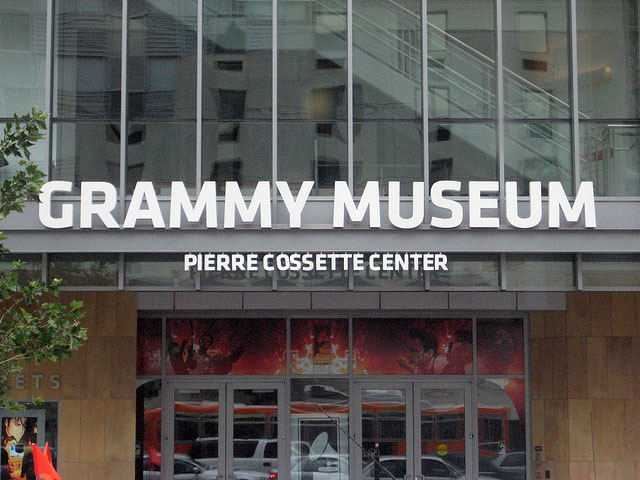 Musical Notes:
Ringo: Peace & Love is on exhibit at the Grammy Museum through March 2014.

What’s your favorite interactive museum exhibit? Tell us about it here.