What can you do with $2.9 billion dollars? For starters, build a brand new city. And not just any city–a fantastical metropolis based off of Minas Tirith from the Lord of the Rings Trilogy. Read on to see what this project is about. It’s just as exciting as the trilogy, only 9 hours shorter. 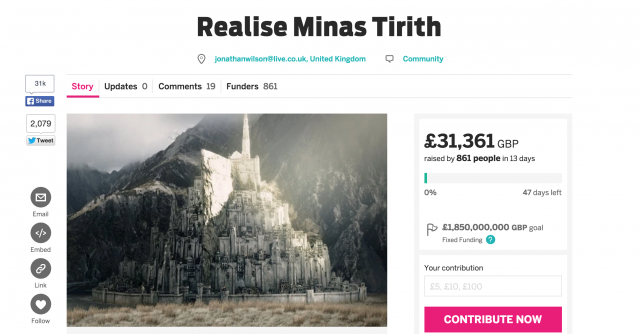 If you recall the glorious battle scene from The Return of the King, then you might have an idea of what the city will look like. Planned by a group of architects and structural engineers, this city will have five tiers and be filled with residential and commercial properties. It’s more than a tourist attraction too. Unlike New Zealand’s Hobbiton, Minas Tirith will be fully functioning city where little Hobbits, kings, elves and dwarfs can coexist.

Project “Realise Minas Tirith” estimates their budget to be a whooping £1.85 billion pounds, which breaks down to £15m for the land, £188m for labour and £1.4 billion for material. If their goal is reached, they’ll start building in 2016. Any money left over from the funding will be used for maintenance and public service until 2053.

Grab some popcorn and watch this story develop @realiseminas and their Indiegogo page here.

Will you be following Project Realise Minas Tirith’s process?