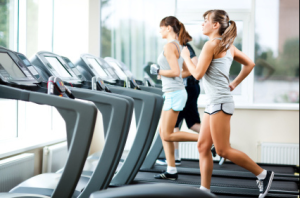 Wish you could harness the energy you put into your workout? This new skin patch could transform enough power to run your mobile device from one result from your cardio: sweat.

This wearable tech is a small square that sticks to your skin, reports New Scientist. Enzymes in it replace the metals normally used in batteries and feed off sweat to provide power. How much power? Prototypes have already run a radio for two days.

“If you were out for a run, you would be able to power a mobile device,” said researcher Joseph Wang at the University of California, San Diego.

But charging your device isn’t the end goal. Researchers are looking at how such cells can be used to track human health.

“The most exciting application is wearable sensors that can monitor health conditions… sweat could generate enough power for a Bluetooth connection so that the results could be read straight from a smartphone,” says Mirella Di Lorenzo at the University of Bath, UK.

Wang and his colleagues used the lactate found in sweat to power their particular biofuel cell. The amount of lactate in sweat is also related to how efficiently a person’s muscles are working, so it could help give readings on an athlete’s performance during exercise. Biofuel cells could also monitor glucose levels in the sweat of people with diabetes, without the need for shedding blood.

Would you use a cell powered by sweat? Tell us in the comments below.