Central Park may sprawl over 843 acres, but, after a while, it feels like you’ve seen every single one of them.  There’s Belvedere Castle.  Again.  There’s the Carousel.  Again.  And, hey, look, there’s the Boat Pond. For moms and dads who feel pretty certain they’ll scream if they have to spend another summer circling the same three playgrounds, sprinklers, and ice-cream stands, consider taking a trek North to a hidden Central Park gem featuring, among others, the aptly named Secret Garden. 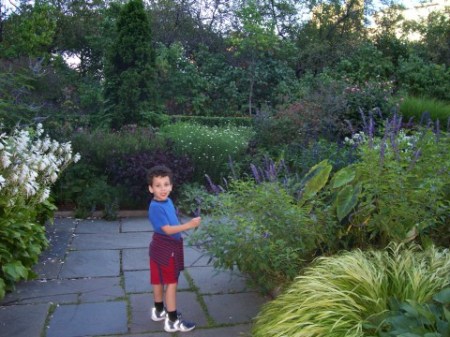 A Little Bit of England…
Now, maybe 5th Avenue between 104th and 105th Streets isn’t precisely the site where Mary Lennox met Dickon and charmed animals and cured juvenile paralysis, but The Conservatory Garden is, in fact, split into three sections, one of which is a replica of a classic English garden, headlined by a Bessie Potter Vonnah sculpted fountain dedicated to Frances Hodgson Burnett, The Secret Garden’s author.  The statue is surrounded by a water-lily pond irresistible to kids, who seem to want to do nothing more than peer into it intently – when they aren’t careening dangerously (albeit joyfully!) around its edges.  (Nerves of steel for parents are highly recommended.)

There’s a Place in France…
And when you’re tired of English children’s literature, you can always take a jaunt onto the continent, which stands only a few feet away in the form of the French-style garden, featuring Spring tulips, Autumn chrysanthemums, year-round holly, and yet another fountain, this time of Three Dancing Maidens. 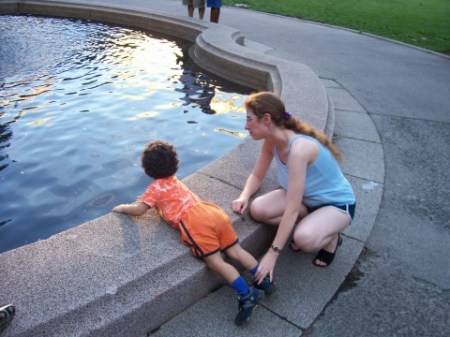 That’s Italian!
Rounding out the international trio is the Italian garden, which tends to draw the most children, especially in hot weather, due to its 12 foot high shooting water spray, visible all the way from the iron-gated entrance.  (The 5th Avenue entrance, though gorgeous and historical – it was made in Paris in 1894 and originally fronted the Vanderbilt Mansion – does require descending down several dozen, quite steep, stone steps.  If you’re bringing a stroller, you’ll want to enter from the West Side via the wheelchair entrance on 106th St., just below the Rhodes Playground.)

Sun Screen:
Once inside, however, the ground is perfectly flat and anywhere there’s a step, there is also a ramp, perfect for power strolling when trying to lull a baby to sleep, or for older kids to explore without fear of tripping.

While the gardens themselves are open to the elements, there are several walkways between the three of them completely shaded by trees, ideal for escaping the noonday sun and stopping for a rest, goldfish crackers and Gogurt al fresco, or merely to calm down an overly stimulated child – or parent.

There are bathrooms for emergency pit stops and diaper changes, as well as two water fountains. 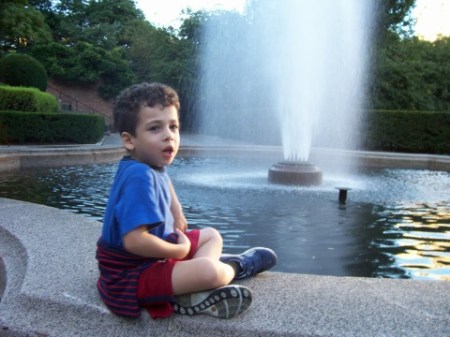 Year Round Fun:
Flowers of every color imaginable bloom in the Spring and Summer (though picking is expressly forbidden), but the Conservatory Garden is open year-round and can be a fun destination in the Fall and Winter, too.  With the fountains empty, the trees stripped of leaves, and the wind howling through the open spaces, the place is deliciously spooky and forlorn, especially if your tastes run towards the Gothic.  Plus, as an added bonus, your kids can go fishing for coins at the bottoms of all three drained fountains.  If the U.S. economy is doing particularly badly, you might luck out and find a Euro (we did)!

Shhh…. Be Wevy, Wevy Quiet….
However, the best part about the Conservatory Garden is that it’s a designated Quiet Zone.

Officially, this means: Dogs must be leashed and kept on pathways at all times; no running, rollerblading, or bike riding; no organized, active recreation or sports allowed; headphones required for radios.

But, the fact is, such a designation isn’t technically necessary.  Save for an occasional wedding party taking pictures on the lawn in front of the Italian fountain, a school group soaking up local history, or a lone, sketching art student, the locale is deserted a majority of the time.  It’s not atypical for a single family to have free run of the entire facility, save for park staff.  The atmosphere is private, still, and infinitely peaceful.

It is, in fact, that rare New York City space where you can actually take a deep breath, then serenely exhale.

Seriously, it’s better (and cheaper) than a yoga class!

— Alina Adams (she even took the photos!)