No parent wants their kid to waste the day away playing video games. But on a chilly, rainy, “I got nothin'” kind of day, the interactive, indoor environment of a good arcade can be a real life saver. NYC is home to several of these fun spots, many of which are family-friendly and offer some real Big Apple character (i.e., we are not sending you to Chuck E. Cheese). These are our picks for amazing local arcades that get a thumbs-up from city kids and adults alike. Anyone up for a round of Donkey Kong? 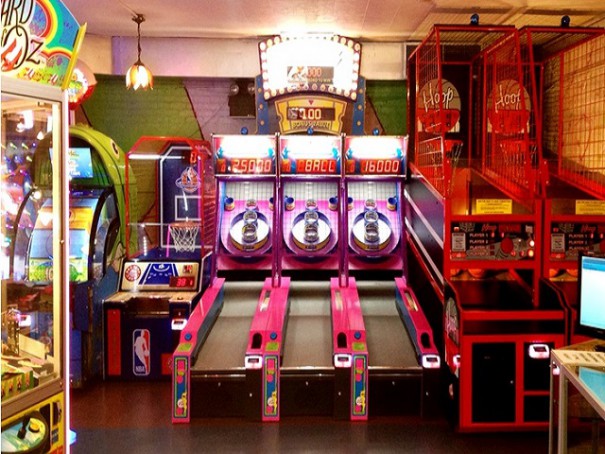 Chinatown Fair Family Fun Center
A lower Manhattan gem, this classic arcade temporarily shut it doors at one point, but thanks to new ownership re-opened in 2012 as a kid-friendlier hot spot. A complete gaming center, they’re open 365 days a year, and late, so you can swing by with the kids after school and stay a while. The owners are always looking to bring in new, innovative games to this fun spot, which has been featured in (grown-up) movies such as The Devil’s Advocate and Falling in Love. Current attractions include Speed Racer, Hoop Fever, Guitar Hero, Down the Clown, Pop ‘N Music, and more. (There’s also a classic photo booth, dance games such as In the Groove 3, air hockey, and skee-ball.) At some stations, kids can redeem tickets for kitschy prizes. No on-site restaurant, but there’s a vending machine with snacks  inside, and you’ll find an ice cream shop and organic supermarket next door.

Good to know: Chinatown Fair appears as a Groupon deal fairly often, so keep an eye out. Also, if you book a kiddie party here, the whole place shuts down so it’s exclusive for your gang only. 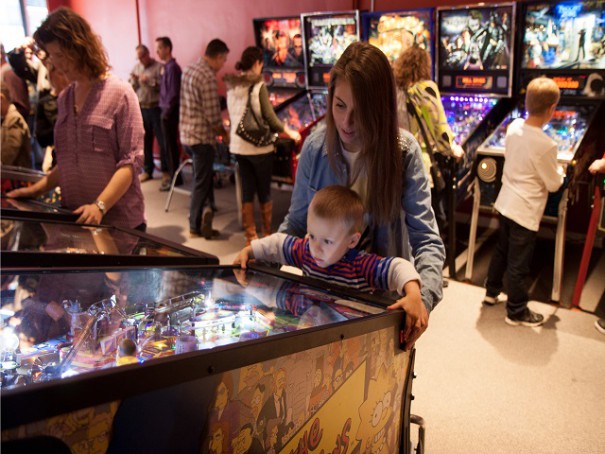 Modern Pinball
All 30 Modern Pinball’s arcade games are family-friendly and non-violent; up to four kids can play at a time and everyone gets unlimited plays by wearing a special wristband. (Kids just walk up to any game and press the start button to play; no more asking mom and dad for handouts!) New game arrivals include The Wizard of Oz and Wrestlemania, and these join other kid favorites like Punchy The Clown, The Simpsons and Transformers. Stepstools are always available for smaller tots and the friendly staff includes pinball wizards that teach any kid that asks how to play. Birthday Parties can now be semi-private or private and party hosts can either order in pizza or parents can bring the food. Additionally, parents can now get 10% off a Baskin-Robbins birthday cake with any party. Parties include two hours of free play for all guests.

Good to know: There’s an educational aspect to all this fun! Modern Pinball is registered with the NYC Board of Education and teachers can bring in their students to study STEM topics. Staffers open up pinball machines to reveal and explain the machines’ inner workings and show kids how these machines operate using electricity and physics. 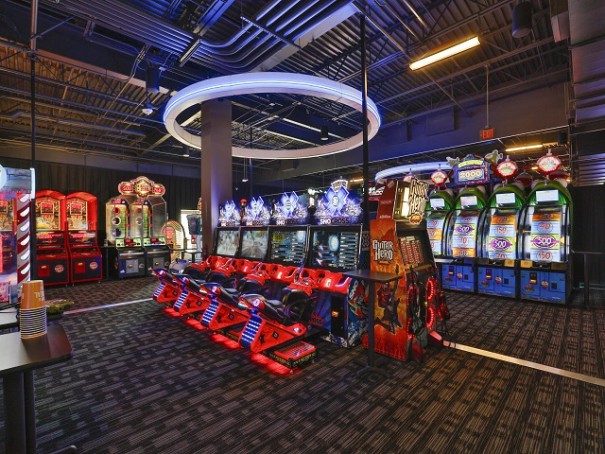 Dave & Busters
This outpost of the nationwide chain is located right in the heart of Times Square. Parents will be pleased to learn that’s there’s a full service restaurant with a solid kids menu here: grilled cheese, mac and cheese, pasta, burger, milkshakes, salads and more. This entertainment center is filled with tons redemption games, which means kids receive tickets while playing and cash them in for prizes. (You may not need another mini notebook or plastic kazoo in your home, but your kid does!) You’ll also find plenty of video games including the ever-popular Candy Crush, Jurassic Park, Pac-Man, Batman, and more, as well as a photo booth and interactive driving games. There really is something for everyone, which is why adults book private parties here as well. If you’re looking to book a children’s party, the Times Square location has an event planner to help go through the many details and party options.

Good to know: Dave & Busters gets crowded at times — very crowded. Try to hang out there on a weekday and not during a school vacation. (We know this is easier said than done.) Before you head over make sure a private party hasn’t taken over the place by checking here or calling to confirm they’re open to the public. 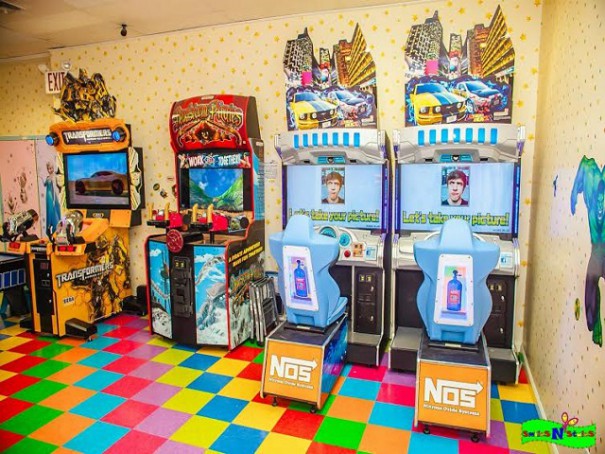 Smiles N Styles
Not your average every day gaming spot, Smiles N Styles is a 1,200-square-foot arcade located in the back of a kid’s hair salon. This of course makes it a great place for Queens locals to head on a rainy day to blow off some steam and get a trim at the same time. Kids getting a haircut can hang in the arcade before or after their trim–as long as there’s not a party happening. (Call in advance to check availability.) On-location games include air hockey, basketball, Dead Storm Pirates, Dead Heat racing, Transformers, dancing games, and more. FYI — If you book a party here, all games are for 2 players, so 12 people or more are immediately occupied. When you rent the whole place, kids also have access to Xbox, Nintendo, Wii U, and PS3 in the hair salon portion of the place as well. Parties may also include disco lights, karaoke, face painting, balloon twisting, costumed characters, clowns, magicians — essentially, you name it.

Good to know: During birthday parties, the hair salon space can be completely transformed into a disco room. You have the option of renting the entire venue or just the party room where the arcade is located. Guests have unlimited use of games for the duration of the event. 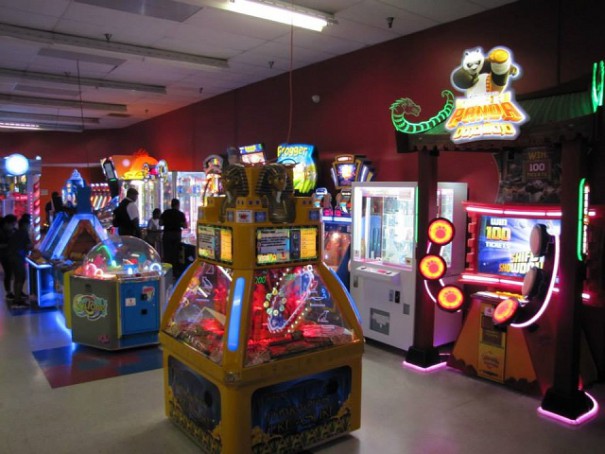 Funtopia USA
Advertised on many city buses, this is a hidden play spot in Queens for kids of all ages, literally: it’s home to entertainment for toddlers up to tweens, with some kids in the neighborhood growing up right before staffers’ eyes over the years. you’ll find over 150 games, a redemption center, an on-site concession stand and more at Funtopia. Popular arcade games include Star Wars, Jurassic Park, Terminator, Candy Crush, Typhoon, Aliens, Pac-Man and dancing games. For little kids, they have Ducky Splash, balloon games, and water spray games, which are all pre-K appropriate; for older high-action kids there’s bumper cars and laser tag on site. You really can spend an entire day here with the kids, so take some deep breaths and make sure you’re wearing comfy shoes. Funtopia USA also has five private party rooms to host your next big bash.

Good to know: There’s also an on-site toddler play area with soft mats and mini slides, a tri-level toddler and pre-K playground with chutes, tubes, and slides, and a make-you-own-stuffed animal kiosk. 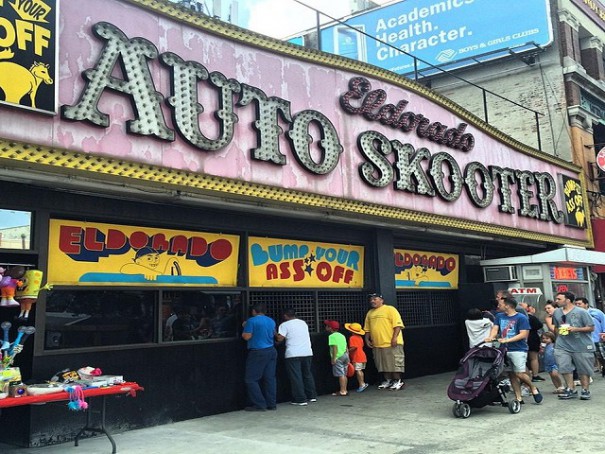 Eldorado Auto Skooter
Hey, if it’s good enough for Queen B, it’s good enough for us. Coney Island’s Eldorado arcade is where Beyoncé filmed her video XO. Located right in the heart of Coney Island, Eldorado not only has awesome bumper cars but a full-fledged, fantastic arcade. If mom or dad is craving a classic 70s or 80s game, head here with the kids in tow. Looking for Pac-Man, Super Mario Bros, Street Hockey, Donkey Kong or Galaga? They’ve got all the retro games, so let the nostalgia kick in. You’ll also find crane games, shooter games, racing games, air hockey, and a bunch of redemption stations such as skee-ball and Whack-a-Mole, where kid-approved prizes are redeemed with tickets. They do book parties at Eldorado, but not this winter. There’s no on-site restaurant or cafe, but naturally, right on the Coney Island boardwalk are tons of vendors, and local eats include Grimaldi’s, Applebee’s, and the finally-opened Coney location of Wahlburgers.

Good to know: Unfortunately, because of private events and promotions, Eldorado is closed till March, but it’s definitely worth checking out in the Spring, right after a ride on the Cyclone. 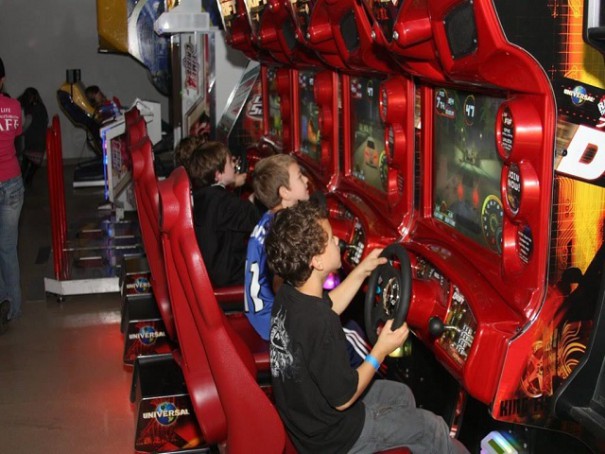 photo: courtesy Life The Place To Be

Life…The Place to Be
You know that expression, “Everything but the kitchen sink”? That applies at Life…The Place to Be in Ardsley, Westchester. Yes, you probably will need a car to get there, but it’s worth the trek on a rainy, cold day, or anytime the kids really need to burn off some city-living steam. Not only does Life… have mini bowling, rock climbing, climbing structures, laser tag, and more, it also houses also a full arcade and redemption center on-site. There are more than 30 arcade games in this 25,000-square-foot building such as Virtual Reality Games (white water rafting, wave runner, water skiing), dance games, shooter games, driving games, skee-ball, crane games, air hockey, and more. Naturally this is a popular spot for kid, teen, and adult parties.

Good to know: You don’t need to leave to eat; there’s a full-service café inside with plenty of good options. Bonus: admission includes free WiFi and fee access to a kiddie soft play area — great for the toddler you’ve got with you while the older sibling gets its game on. 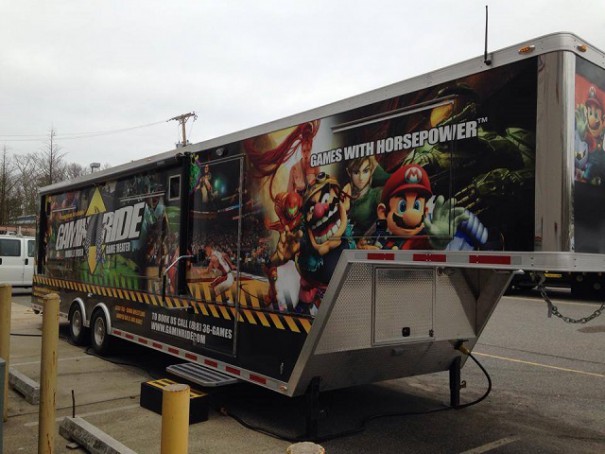 Gamin’ Ride
Can’t make it to one of these gaming spots? Have the arcade come to you! (Provided you have the space.) Westchester mobile arcade company Gamin’ Ride is a mobile, indoor-outdoor video game theater that drives right up to your door. The mobile arcade accommodates 16 people on vibrating seats — to enhance game play — and is equipped with four jumbo TVs in a self-contained climate controlled theater. Amazingly, the truck has parked itself in Manhattan for some special/private events, even though it’s not always easy to locate space to hold a 55-ft long vehicle. Gamin’Ride also has two outside TVs, so a total of 24 gamers can play at one time on XBOX, PlayStation or the Wii.

Good to know: The mobile ride comes to you for parties or special events (such as academic fundraisers) only; there’s no open play times. However, if you book a party with them, kids won’t be crowded: there is plenty of room inside for people to sit, stand, walk around, and even dance. Additionally, birthday parties are hosted and arranged by experienced game gurus who love games, fun, and kids!

What’s your favorite arcade to hit with the kids? Tell us in the comments below!