Did Hurricane Sandy find you fielding questions from your kids that made you wish you had your eighth grade science teacher on speed dial? Was “I don’t know” an insufficient answer to the plea, “Why is it so cold?!” during the Polar Vortex? Is your kid really into tornados? If you answered “yes” to any of these questions (or think your child would like a cool, interactive science exhibit) head to the Nature’s Fury at the American Museum of Natural History like the wind! 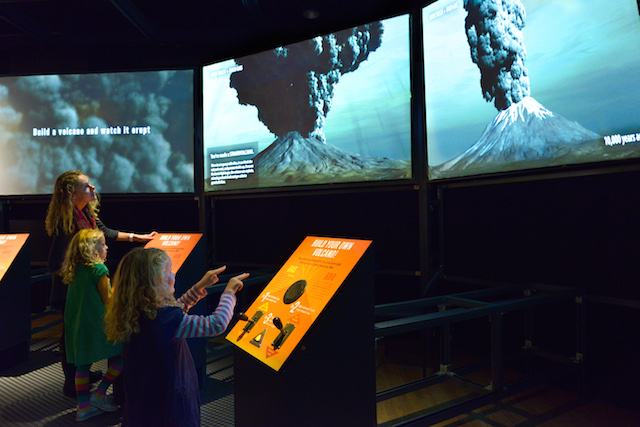 What’s It All About?

Nature’s Fury: The Science of Natural Disasters explores the causes of natural disasters and the consequences of these events, while also considering the risks they pose. But it’s not all rocks and wind: the show also tells the stories of how individuals and communities cope and adapt in the aftermath of these tragedies, and how scientists are helping to reduce the risks, plan responses and prepare for future disasters.

The show considers in-depth four kinds of major natural disasters: earthquakes, volcanoes, tornadoes, and hurricanes, and utilizes powerful footage and images of the events and their aftermath throughout. Nature’s Fury gives visitors the opportunity to learn about these phenomena in a variety of ways, from audio and video clips to numerous interactive stations. You’ll find many of Mother Nature’s most famous creations, both recent and ancient, such as the eruptions of Mt. Vesuvius in Pompeii in 79 A.D. and Mt. St. Helens in 1980, Hurricanes Camille and Katrina, and yes, our local celebrity storm, Sandy.

There’s lots to learn here — you’ll find refresher courses in what, exactly a tectonic plate is, and get a breakdown of how, a tornado forms, for example — but the big hits with kids will be the interactive elements of the show. Highlights include the chance to “Build Your Own Volcano” by mixing “goo” and “gas” (and then watching it erupt); causing an earthquake by jumping up and down (and seeing activity register on a seismometer), and standing in the eye of a roaring tornado (thanks to a special filming device placed directly in the path of a giant twister).

Standing in the eye of a tornado photo: © AMNH/M. Shanley

Sandy From Start to Finish

Originally conceived at Chicago’s Field Museum, the Museum of Natural History’s version of the exhibit includes additional pieces from the New York institution’s collection, and an entirely new element New Yorkers will find extremely compelling: a large-scale, interactive map that shows the movement of Superstorm Sandy through the New York area with an explanatory narration. (We saw one kid find his neighborhood on the map.)

In addition to the cool stuff to do, Nature’s Fury includes many impressive artifacts that effectively illustrate the force and power of these events. You’ll see beads and jewelry trapped in volcanic rock from Vesuvius, bent traffic signs and metal chairs ravaged by a 2007 tornado in Greensburg, Kansas, and posters submerged in the rising waters of Katrina.

Nature’s Fury is probably best for older museum-goers, who will be able to fully appreciate and experience the exhibit’s content. It impressively packs in a lot of science and information, without being boring, and is sure to leave your kids with a deeper understanding of the awesome power of nature, in every sense of the word.

Will you be visiting Nature’s Fury? Let us know in the comments below!