The new Family Ecology Sails at the South Street Seaport Museum really do offer something for pretty much every member of the household. History buffs will dig the 19th-century schooner that serves as the vessel; boaters will love hoisting the sail of the ship and those who enjoy creatures of the deep will see more than a few hauled in from the waters of New York Harbor. (Parents will love that it’s interactive, fun and educational — no kiddie rides and long lines involved.) And the views? Also not too shabby. 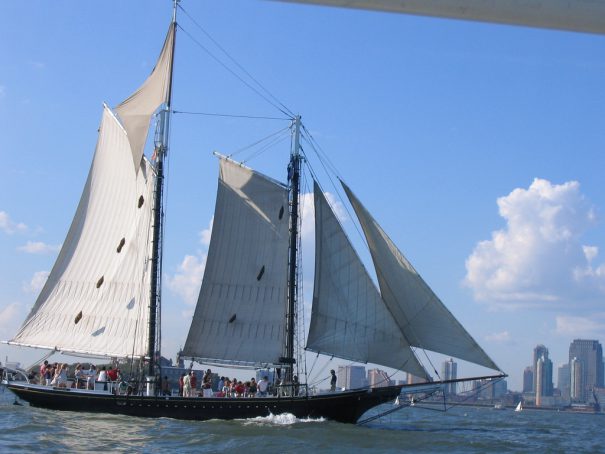 All Aboard!
The historic vessel alone that’s used for the maritime excursion is impressive. Constructed in 1885, the schooner Pioneer has wrought-iron hull, and was the first of only two iron-hulled cargo ships built in the U.S. Now, it’s the only iron-hulled American merchant sailing vessel in existence!

First thing’s first: guests get a quick lesson in the right way to stand (subway surfing experience comes in handy here), where to sit and all the nitty gritty of the mighty ship. In no time at all, you and the kids are helping to capture the water that will eventually be used to hold any fish caught on the expedition.

Both children and adults help raise the sails of the Pioneer, learning the terminology used by the crew for when to go, stop and let go of the rope. As an amazing bonus of the journey to the fishing grounds of Bay Ridge, passengers take in spectacular views of downtown Manhattan, Governors Island, the Statue of Liberty and Ellis Island. (We’ll venture to say the view of Lady Liberty from the Pioneer is actually far superior to the one you get when you visit the statue herself, in part because you have an up close view without having to crane your neck.) 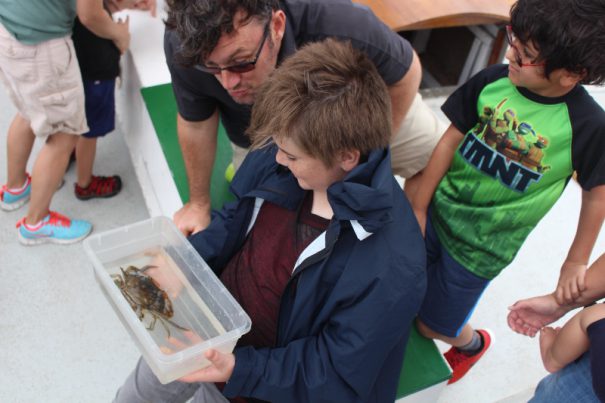 Go Fish!
With the help of nearly every child on the boat (and some adults, too) a trawl net is set up with the hope of bringing up a variety of sea creatures. Because this is nature, not Disneyland, it’s never certain what will be caught, and staffmembers make no promises. (But, there’s also a chance you might snag a seahorse!)

On our outing we were lucky enough to catch Porgy, Blue Crabs, Flounder and even a Moon Snail. Crew members explain how each creature moves in the water, what they eat, and possibly most interesting, why they look the way they do. It was great to see kids of a variety of ages ask and answer questions about the fish, and the South Street Seaport Museum educator kept the trip interesting at every turn. 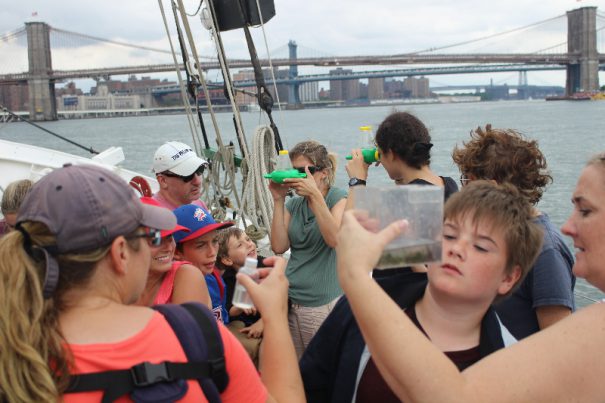 Know Before You Go
We’d recommend this outing for both locals and tourists alike, and while it’s recommended for those ages 5 and up, the four-year-old  we brought along (who happens to be fascinated with sea life) was fully-engaged the entire time. Keep in mind that the excursion takes place during prime lunch time (noon-3pm) so bringing water and non-messy snacks to keep everyone satiated is advised.

When
The remaining dates of this unique excursion are August 21 and September 25, 2016 from Noon -3pm. If your child is into the sea, sea life, sailing or sightseeing and you can’t make these dates, you can inquire about how to possibly plan a school trip.

What’s your favorite NYC boating trip to take with the kids? Let us know in the comments!