A peak, premium ticket to see the Rockefeller Center Rockettes kick up their admittedly lovely legs in unison will set you back $299 dollars…a person.  It doesn’t matter if the person in question isn’t tall enough yet to ride most of the roller-coasters at Disneyland and will probably spend a part of the show curled up in your lap or playing with the colored flashlight you bought them in the lobby.

A Christmas Story: The Musical on Broadway tops out at $153.50.  (Of course, you can always stay home and watch the original movie – over and over and over again – on TBS.  But, you didn’t hear that here.)

Which is why it’s so nice to know that, for the third year in a row, The Swedish Cottage Marionette Theatre in Central Park (enter at West 81st Street and follow the path down to 79th; it’s tucked in behind the much larger Delacorte Theater, home of Shakespeare in the Park) is offering their Three Bears Holiday Bash puppet show for only $8 for adults, and $5 for children under 12. 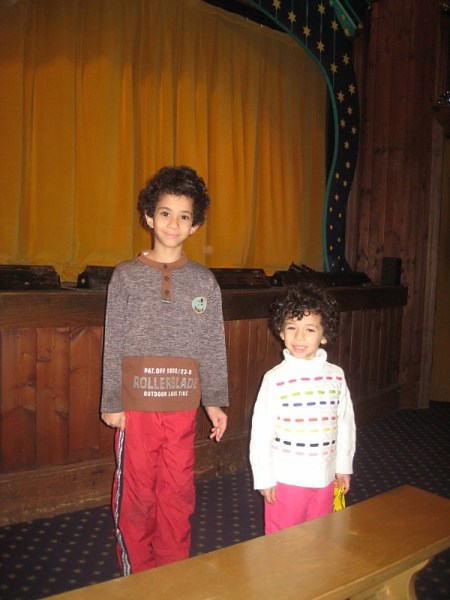 Tale as Old as Time
Though billed as “drawing from the stories of Hanukkah, The Night Before Christmas and Kwanzaa,” be forewarned that this is primarily a Christmas affair.  The main plot concerns Baby Bear inviting Santa Claus himself to perform in the family holiday show and the difficulty North Pole’s most famous resident has in getting to New York City on time (at one point, he ends up stuck in a tree offstage).  The other two holidays merely merit one number a piece and, to make matters even more confusing, while everyone else in the cast is an animal, the puppets performing in the Hanukkah and Kwanzaa set pieces are human, as if to further stress their difference from the rest.

On the other hand, while Baby Jesus and the true meaning of the holiday are briefly evoked at the very start, the focus is on the secular aspects of the festivities, complete with an audience participation sing-along of The 12 Days of Christmas (which, let’s face it, is all about accumulating stuff, be it golden rings or leaping lords) and featuring dancing flamingos dressed as ballerinas along with headless, neon bears (neither of whom were presumably present at the manger 2000 years ago).

As a special bonus, following the spectacle, the puppeteers come out from backstage to demonstrate how the marionettes work.

History Channel
And the cottage where the show takes place is an experience in and of itself.  Originally imported to the US back in 1876 as Sweden’s contribution to the Centennial Exposition in Philadelphia, it was relocated to Central Park on the orders of one of its primary landscape architects, Frederick Law Olmstead.

In 1947, it was the temporary home of a traveling marionette troupe and, in 1973, a permanent theater was built inside the cottage.  The cozy space is decorated with puppets from previous productions, such as Pippi Longstocking, Hansel and Gretel and Peter Pan.  Kids love looking around and seeing who they can recognize. 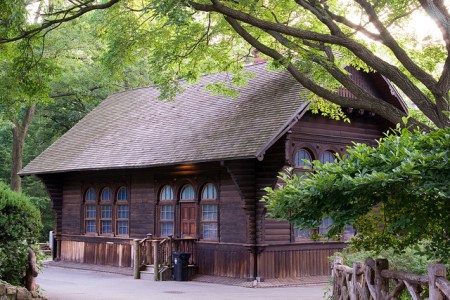 So Close, Yet So Far
One thing that kids (and parents) like a little less, though, is the fact that seating is on hard, wooden benches with no backs or arm-rests.  Squirmers have been known to take a tumble mid-production.

In addition, parents are asked to sit to the sides, so that the littlest visitors have an unobstructed view.  This is all fine until someone suddenly decides they don’t like sitting so far away from Mommy, and then a mad scramble to change seats in the dark begins.  If you suspect your child may be one who won’t like being separated from you, best to choose a spot further in the back and hold them on your lap.  Against the wall is particularly good, as they can then stand on the bench and get a clear view for themselves without obscuring anyone else’s.

Weather Alert
Also, though indoors, the theater gets chilly in the winter.  You can actually feel the wind coming in through the wooden slats.  The Theatre offers a coatroom, but best hold on to your jackets, or at least a warm sweater, just in case.

The Three Bears Holiday Bash runs through December 30, Monday through Friday at 10:30am and 12:00pm, with an additional 2:30 pm performance each Wednesday, and Saturday and Sunday at 1:00pm.  The schedule is subject to change, however, and as reservations are required, they suggest you consult the website just in case: CityParksFoundation.org

Tell us about your experience at The Swedish Cottage Marionette Theatre? And if you know any other kid-friendly entertainment deals this holiday season, don’t keep them a secret!

Photo of kids courtesy Alina, photo of theater coutesy of cphoffman42 via Flickr.