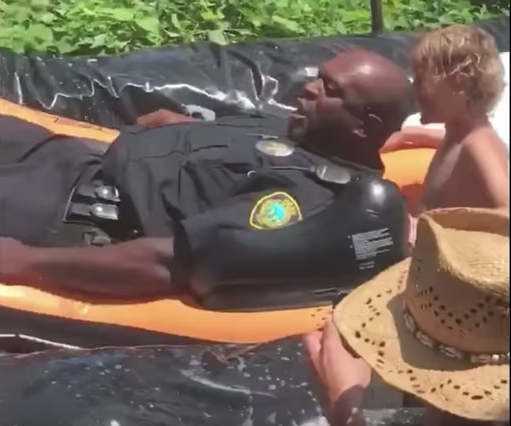 Some kids splashing around on a giant homemade Slip ‘N Slide had some surprise visitors when police officers called to the scene decided to join in on the fun.

According to a CBS News report, Asheville, North Carolina, police officers Joe Jones and Carrie Lee were dispatched to the neighborhood block party after a complaint that the party’s 50-foot makeshift Slip ‘N Slide was blocking a nearby road. The officers surveyed the scene and decided that the slide wasn’t blocking anything.

Then, to the party-goers delight, they stayed to slip down the slide for themselves.

“We looked at it and determined that it wasn’t really an issue and the first thing I said was, ‘I’m not here to break up your fun,'” said Lee in a video posted to the Asheville Police Department’s Twitter account.

The nearly 6-foot 6 Jones said he didn’t want to go down at first, but he was persuaded.

“I thought I was going to be able to get out of it,” Jones explained in the video. “[Lee] went down a trash bag and I’m too big to go down a trash bag. But then the kids pulled out this big raft and so then I had no choice.”

The neighbors told CBS News that it was a welcome surprise to see the officers joining the party.

“We for sure did not expect that,” Asheville resident Katlen Joyce Smith told CBS News. “The kids were squealing. Everyone was screaming. . . We just couldn’t believe it. We were all laughing hysterically.”

Do you love this story as much as we do? Tell us why or why not in the comments below.