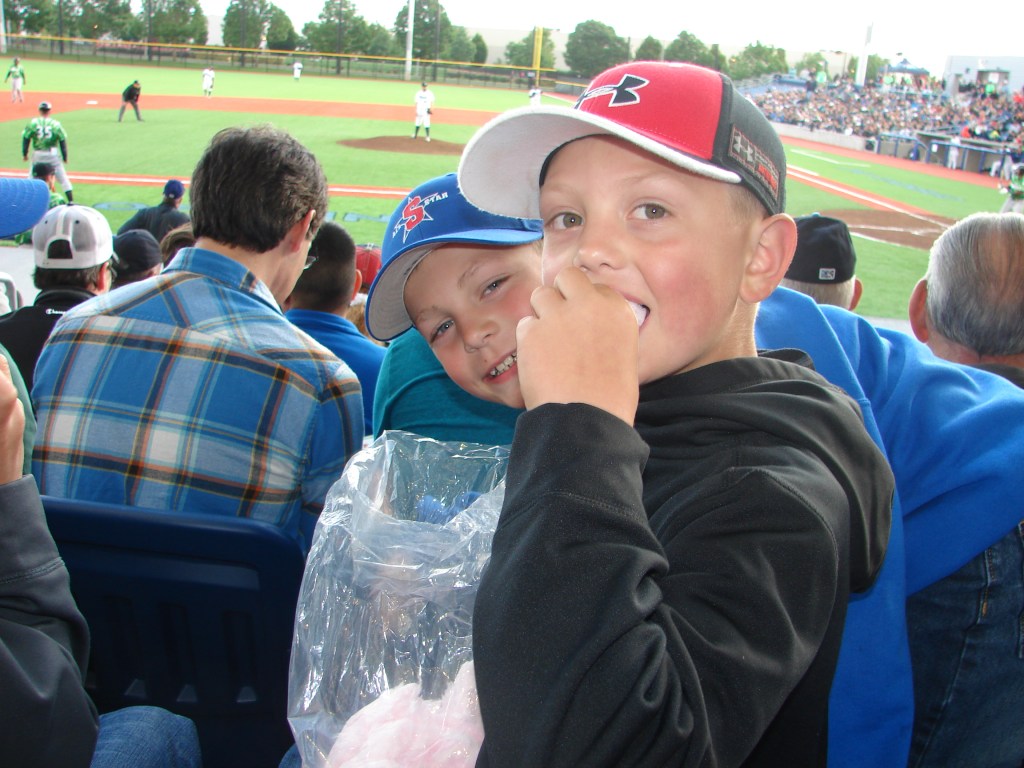 Sure, here in Portland we don’t have a major league team like in Seattle, Los Angeles or San Francisco, but what we have is something better. We boast not one, but two Single A teams: the Hillsboro Hops and the Salem-Keizer Volcanoes, both of which are within about 30 miles of Portland. This summer bask in America’s pastime with sun (we can only hope!) and Cracker Jack deliciousness for less money and less hassle.

Why Single A is Triple Awesome!
Both stadiums are small and intimate, which means you are never far from the action. Between innings they play silly games, from the Hops’ “Musical Yoga Balls” (think exercise balls as musical chairs) to dance contests. Plus, the players are super friendly, eager to sign an autograph and often give a lucky fan a game-used bat or ball. 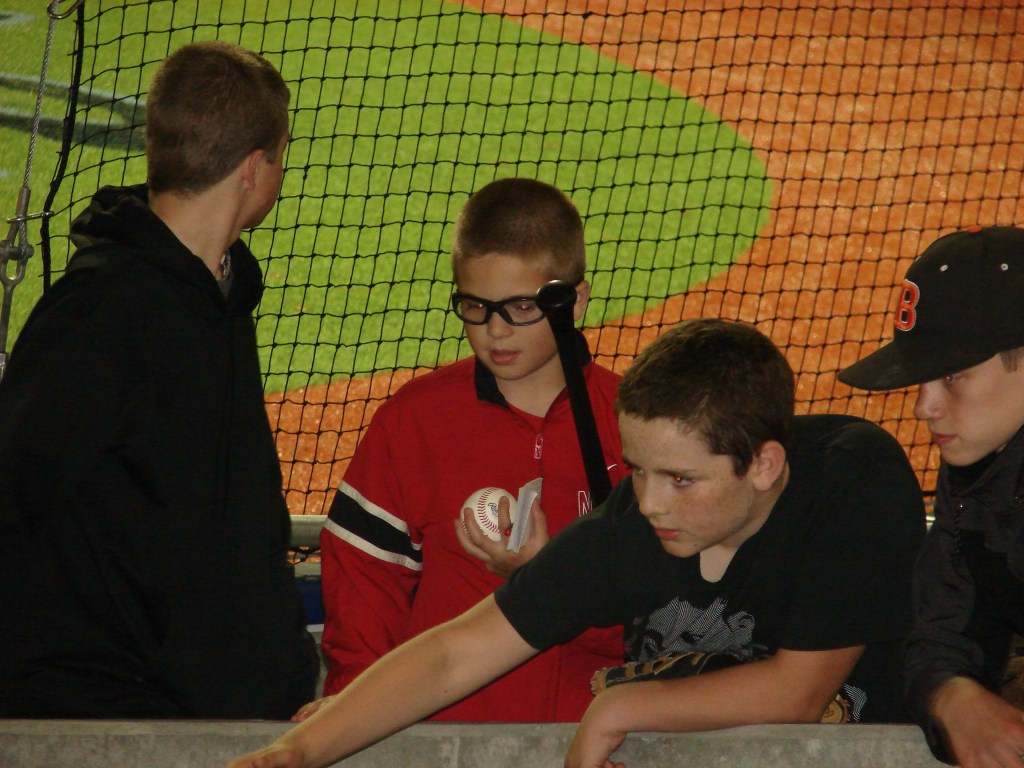 Who They Are: The Hillsboro Hops are “bringing baseball back to Portland” with the team’s inaugural season. Formerly the Yakima Bears, the Hops are the Class A Short Season affiliate of the Arizona Diamondbacks.

What’s Cool about the Stadium: Brand spanking new, it features a family berm where kids can run around and play if they don’t want to be confined to a seat. Speaking of seats, most of them are covered, which is a huge plus for this town of liquid sunshine. Every person working there was remarkably friendly and helpful! 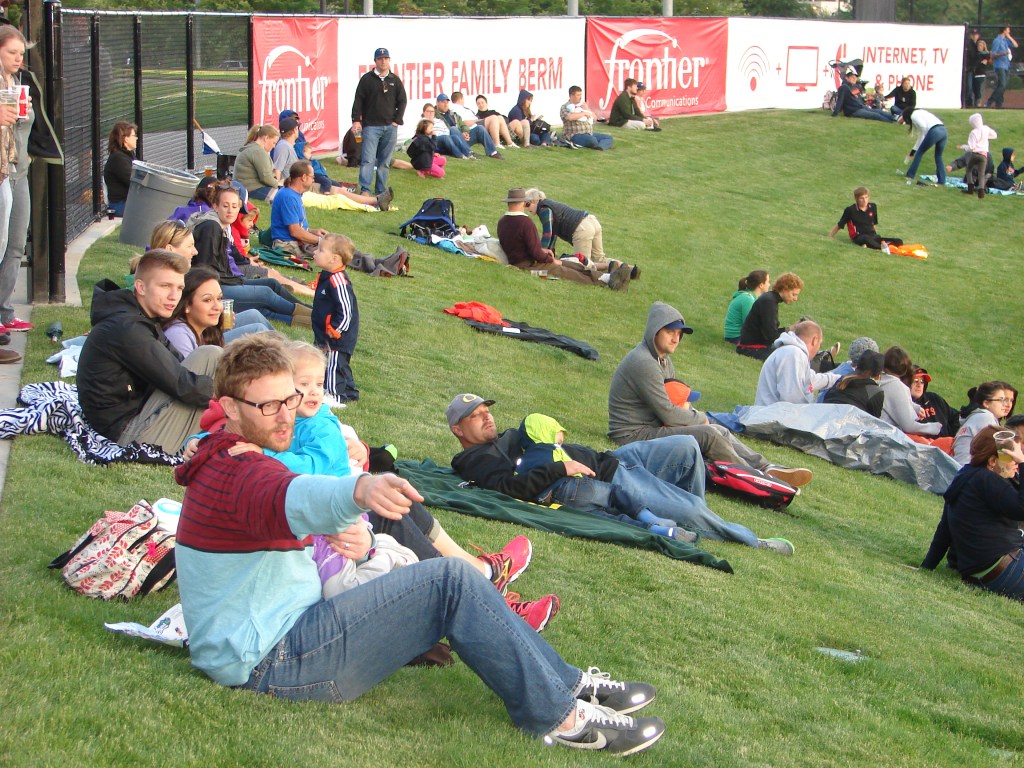 What to Eat: You’ll find your average ballpark fare – dogs, burgers, pizza — at prices hovering between major and minor league. A Tillamook bacon cheeseburger with fries went for $9; a slice of wood-fired pizza was $4. Kids’ meals come with a juicy apple! 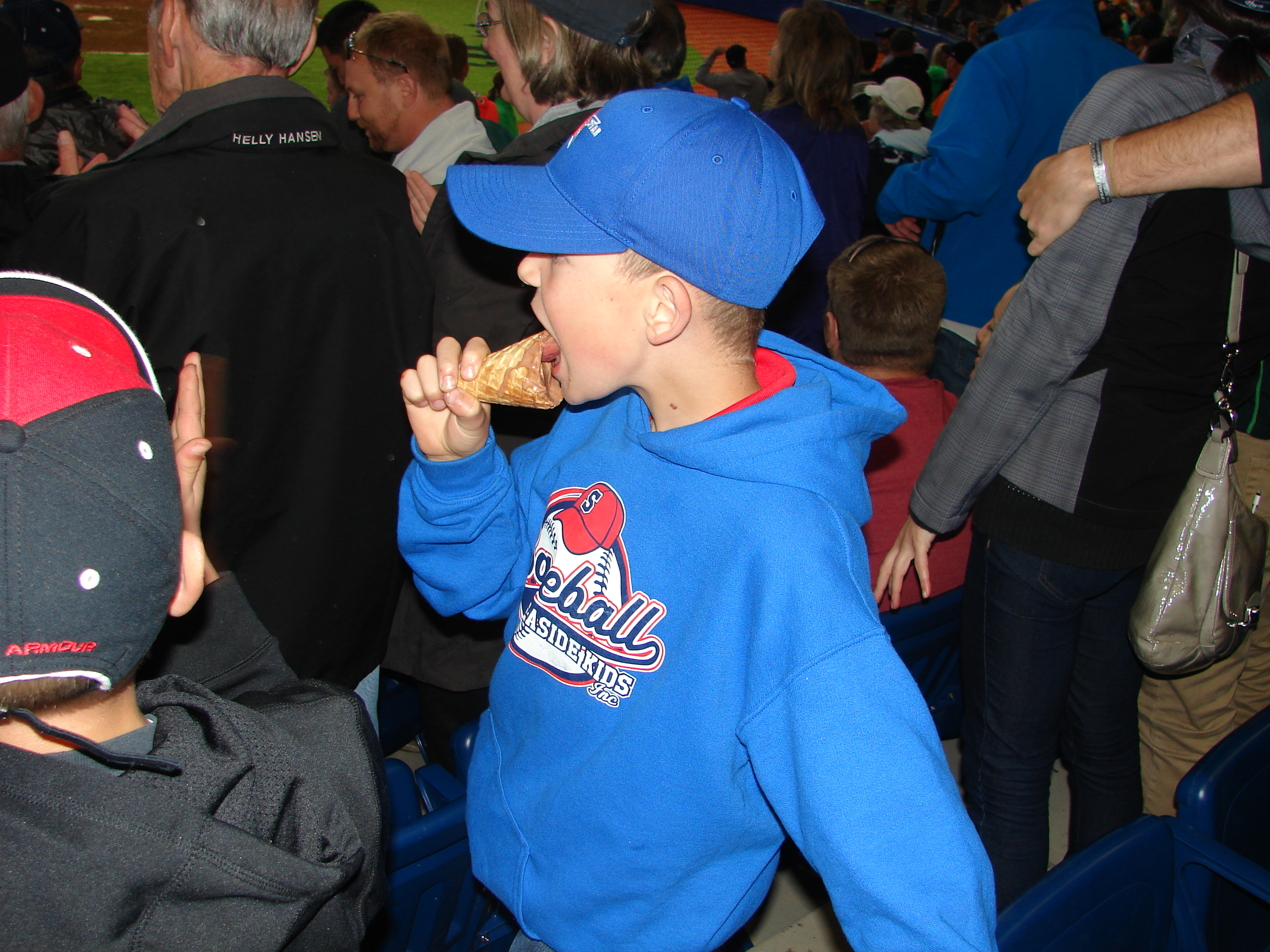 What it Costs: Individual game tickets range from $7 to $16, with a variety of plans available. Parking is $5.

Fun Fact: The team is named after beer hops, not any sort of hopping animal or a hopping ball (even though their mascot looks a little like a frog to us!). 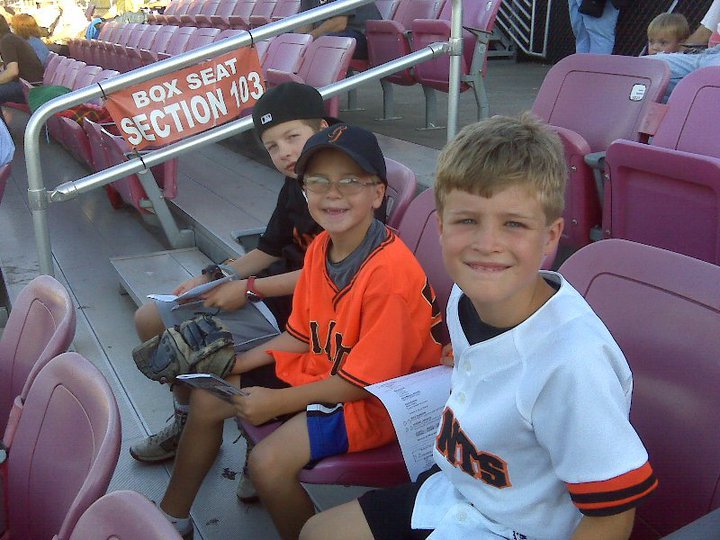 Who They Are: The Volcanoes are the Class A Short-Season affiliate of the San Francisco Giants – World Series winners in 2010 and 2012. Notable Giants including 2010 Rookie of the Year Buster Posey and 2012 World Series MVP Pablo Sandoval have played in the park, which opened in 1997.

What’s Cool about the Stadium: The stadium has a wide-open concourse with plenty of room for the kids to roam and a play area near the batting cages. Out in front, don’t miss the statue of the Little Leaguer. Kids love the speed pitch machine, where for $1 you guess how you’re your pitch is, and if you are close, you get to spin the prize wheel. 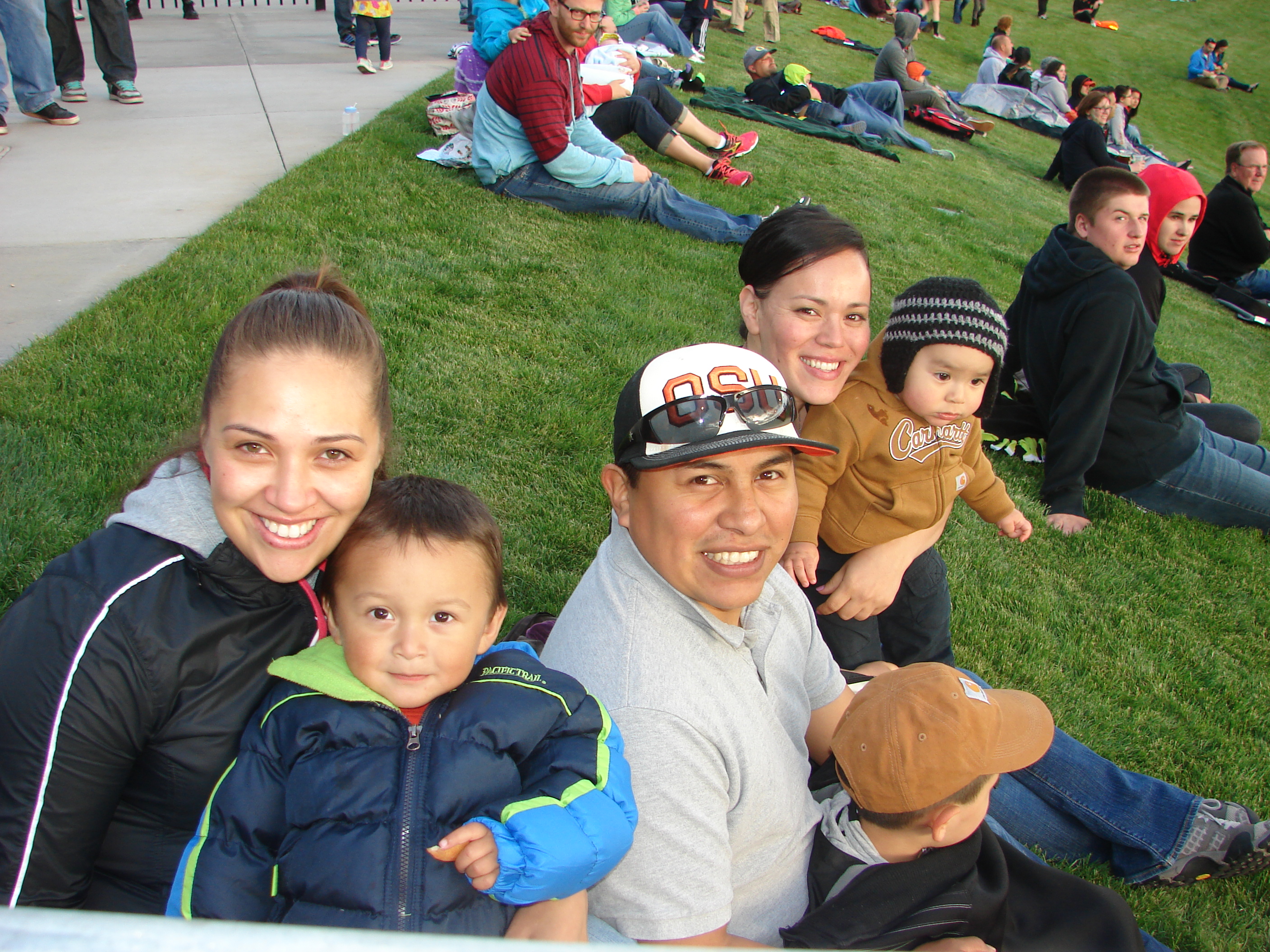 .
What to Eat: You’ll find regular stadium eats, with a bento stand thrown in for good measure. Prices are a little more reasonable than the Hops, and they have Wednesday Family Feast nights, when different innings feature different treats for $1, from hot dogs to popcorn to ice cream.

What it Costs: Individual game tickets cost between $7 and $20, with a variety of plans available. Parking is $3. But you’ll love Monday Kids’ Night, where admission for kids 12 and under is free! Email jwalker@volcanoesbaseball.com for your voucher.

Promotions: This stadium hosts promotions galore. In addition to those mentioned above, check the website for information on Friday Fireworks Nights, Kids Run the Bases, Pirate night and much more.

Fun Fact: The World Series trophy will be visiting the stadium on Saturday July 13. Check the website for details. 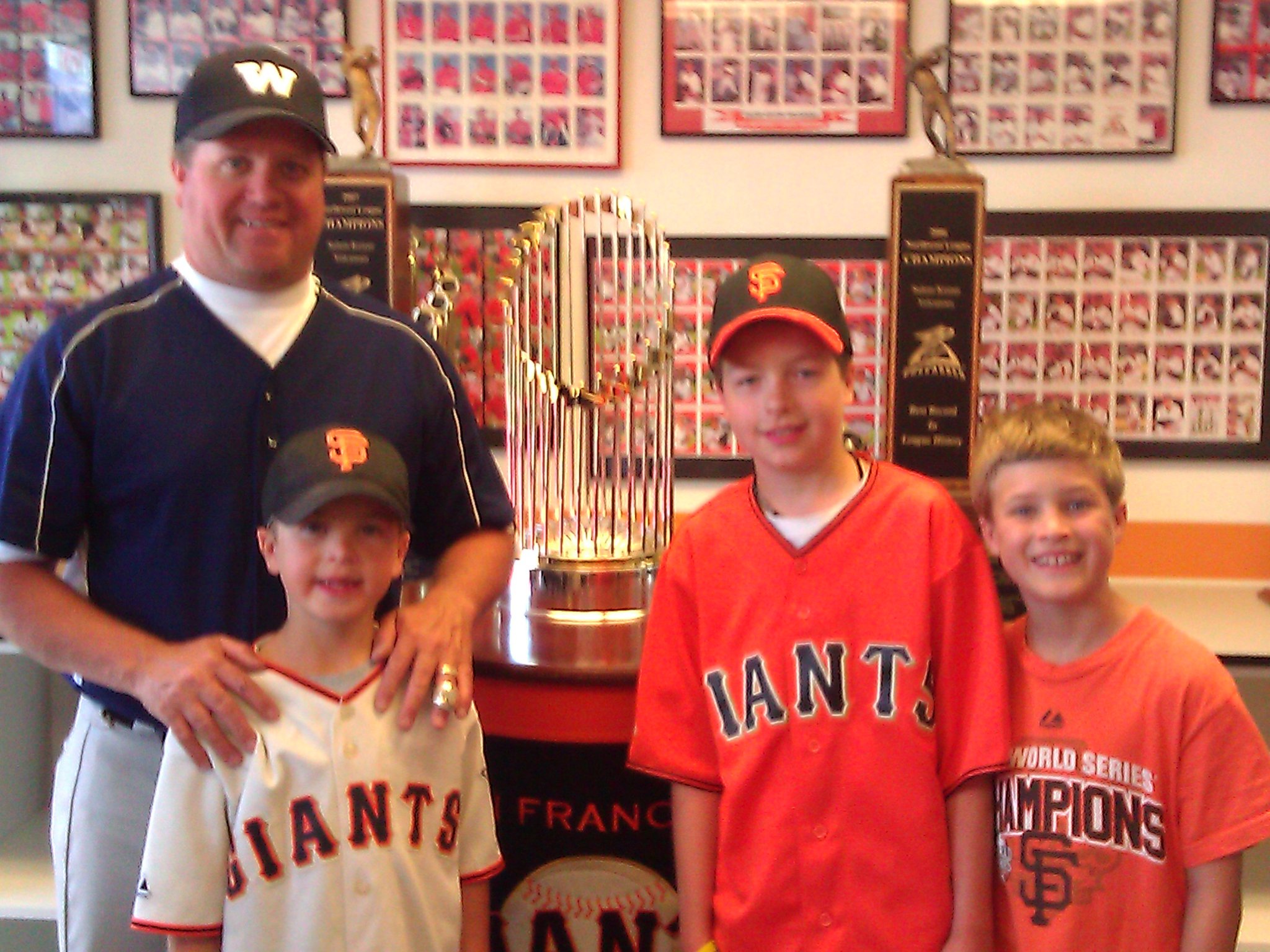