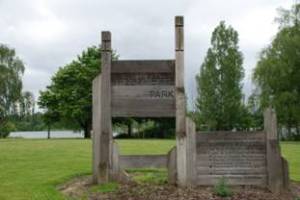 neighborhood is a long strip of town bordering the Willamette River just south of downtown Portland. The area formerly known as Fulton is said to be named after various Johns who influenced the area, The B. P. John Furniture Company, a large manufacturer in the area in its industrial past as well as two architects John W. Storrs and John D. Gray, who privately transformed the area into a riverside residential and commercial development. With its proximity to the river, it’s an area well suited to get kids active and outdoors and is fun for the whole family.

Where to go: Pack a picnic and load your bikes and trikes and head to Willamette Park. This popular destination for recreation along the Willamette River is a perfect place to spend a sunny summer day. Its wide grassy areas, soccer fields, playgrounds, tennis courts, boat ramp, paved bike paths and picnic tables make it a regular destination for families all summer long. Plenty of birds and wildlife can be seen in the area and provide good entertainment for the little ones. Great blue herons and bald eagles can be seen nesting on Ross Island from the park as well.

If you explore by bike, head north from Willamette Park for a leisurely ride along Willamette Greenway Trail to the South Waterfront, where you’ll find Elizabeth Caruthers Park. The park is a new addition to the area and has an urban garden with a bocce court, small water play fountain, boardwalks an art installation. Stop for a break before locking up the bikes and taking a ride on the Portland Aerial Tram. The sleek pod-like cabins soar at 22 miles per hour, climbing 500 feet over a distance of 3,300 feet to connect the South Waterfront to OHSU’s Marquam Hill campus. It’s a fun and scenic ride for kids and commuters alike and provides spectacular views of Mt. Hood, Mt. St. Helens on clear days.

If you’re in the mood for an aquatic excursion, Portland Kayak Company back in Johns Landing rents kayaks and canoes by the hour and offers tours as well as instruction. There is a Kayaking for Kids program for kids aged 8 and up.

For indoor fun in the area, check out The Circuit Bouldering Gym which boasts over 500 boulder problems for all ages and ability levels. In addition to day passes and memberships for students and adults, it offers after school programs and summer camps for kids 4 and up. The Circuit also hosts birthday parties and private events.

For something more leisurely, there’s the Willamette Shore Trolley which runs along a 6 mile stretch of historic rail line between Lake Oswego and Portland. You’ll see a stop at Willamette Park and further north toward South Waterfront. It’s currently not operating on its regular schedule, but it hopes to be back in action by mid-summer.

Possible lunch spots: Pack a picnic lunch to enjoy at one of the parks or swing by Zupan’s Market and pick up some gourmet snacks or something yummy from the deli.

Fulton Pub, the neighborhood McMenamins, is across the street from the Willamette Park entrance. It has a nice, relaxing outdoor patio as well as a kids menu that includes Scooby Snacks and tater tots. The Fulton Pub dates back to 1926, when it was a Prohibition-era hangout and speculation says that the Pub may have provided patrons an “unadvertised special” every now and again.

For riverside options, just off the Willamette Greenway Trail is more upscale and sophisticated Aquariva. Stop for a peaceful lunch on the outdoor patio or come back for the new Family Night on Tuesday evenings. Executive Chef, Andy Arndt, a father of two young kids, understands the value of teaching kids how to enjoy themselves in a restaurant with appropriate etiquette. He designed a special menu just for kids that includes dishes like homemade Macaroni & Cheese and Gnocci with Cheese & Butter and finishes off with a decadent Thomas Kemper float.

Further north on the river is The Old Spaghetti Factory, which originated in Portland in 1969. The fun and quirky antique décor and family friendliness will delight the kiddos.  After lunch…or maybe before, check out the huge old fashioned scale upstairs as well as the game room to brush up on your Donkey Kong and Frogger skills.

How to dress: Comfortable and weather appropriate.

Need to know: The Johns Landing area is great for walking in some areas and on the riverfront, but Macadam can get busy, especially with little ones. Also, be sure to mark your calendar for the 2011 RiverFest, August 19-21

Bonus: Free Concerts in the Park are held every Wednesday in July at 6:30 pm at Willamette Park and Aug. 19 and 26 at 6:00pm at Elizabeth Caruthers Park.