The spunky, spitfire elementary kid, Junie B., from the beloved chapter books by Barbara Park, sings her heart out about her struggles and triumphs on stage for the Oregon Children’s Theatre production, Junie B. Jones: The Musical. Whether you’re an old fan, or it’s your first time meeting Junie B., this wacky-hour of belly-laugh inducing fun will not disappoint. Grab your tiny theatergoers and read on for our inside scoop on the show. 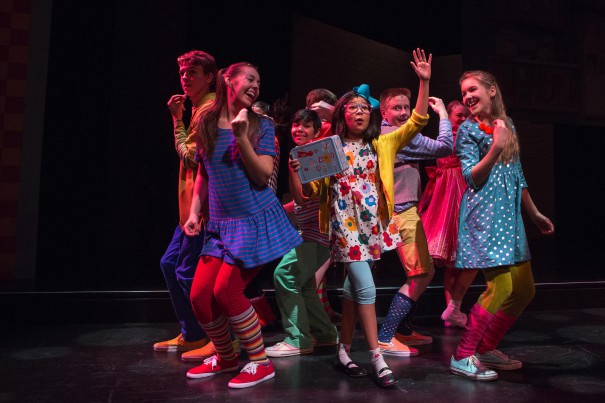 The play is an adaptation of the book, Junie B. Jones: First Grader (at last!) and follows this feisty girl as she makes her way through first grade. Her story includes writing in her Top Secret Personal Beeswax Journal, getting her first pair of glasses, navigating new and old friendships, riding the school bus, getting a new lunchbox, eating sugar cookies and performing in the kickball tournament’s halftime show—all with big lessons learned along the way.

The snappy music and dance numbers include 16 songs that are incredibly memorable and catchy. Kids will love the opening number, and will begin howling with laughter when Lucille, Camille and Chenille introduce themselves. Future playgoers should be warned. Top Secret Personal Beeswax will be firmly implanted in your brain for days after the play, even if your kid isn’t singing it at the top of her lungs. 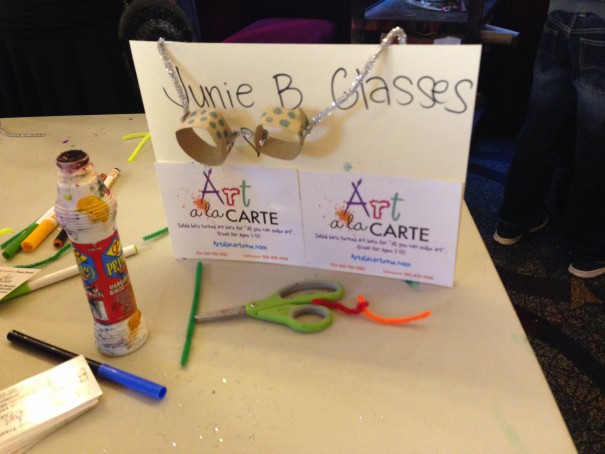 Get to the theater early because upstairs, kids will have the opportunity to to craft up some Junie B.-style glasses with materials provided by Art a la Carte an hour before showtime. The craft tables are easy to spot on the second floor near the elevators. Upstairs, you can also see sketches, by artists Adrian Wallace and Becky Hawkins, from dress rehearsals hanging on a wall between the elevator and concessions for people to view up close. 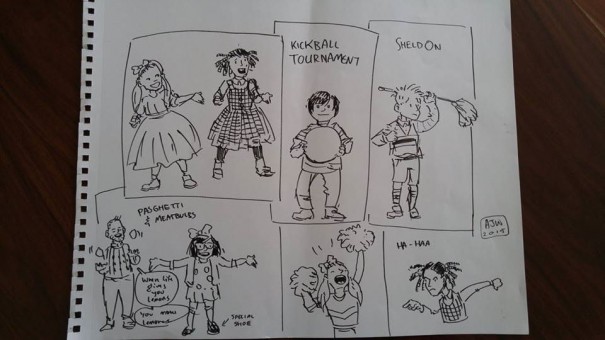 After the show, stick around for autographs with the characters from the performance. The line is really long though, so make sure your little one is up for the wait.

Looking for more to do before or after the play? The Multnomah Library’s Central location (801 SW 10th) is close, or get those wiggles out while running around the South Park Blocks behind the Newmark, between SW Park and 9th avenues. The theater also has a list of nearby activities and restaurants. Click here to see it.

There’s a concession stand on the second floor of the Newmark for the youngest among us if you’re looking for a super quick bite, like a giant pretzel, chocolate chip cookie, candy or a bag of chips. But, if you’re looking for more options, hit 21st Century Pizza (1221 SW Jefferson) for slices. Because the show is only 60 minutes, be sure to head to the restroom before the show, as there’s no intermission. Also, only closed containers are allowed in the theater, so drink the wine you purchased in the downstairs bar and eat any food that you have before finding your seats.

The play is one of the OCT’s Ticket to Read performances, whose mission is to link literacy with live theater. The program gives low-income students a free theater ticket and a copy of the Junie B. Jones book upon which the play was based. The program is designed to get kids even more excited about reading. Want to know more about it? Click here. 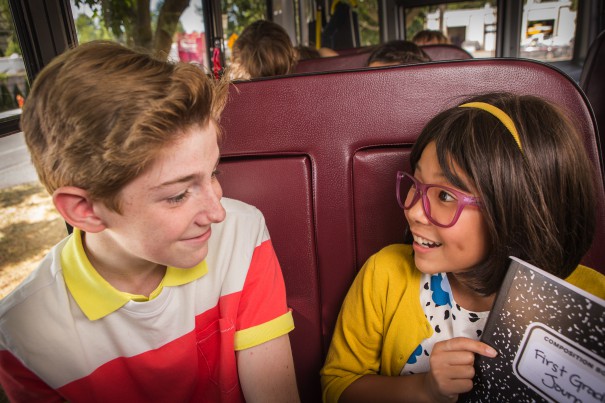 Parking can be tricky downtown, so give yourself plenty of time to secure a spot. If you’re lucky enough to find street parking on Broadway, make sure you find one that can handle 90 minutes. You could also park in the nearest lot two blocks away at the Fox Tower (775 SW Taylor), or Smart Park (123 SW Jefferson).

There’s a set of elevators and ADA restrooms making the Newmark Theater accessible for wheelchairs, as well as strollers.

Do you love Junie B. Jones and will you be going to see the musical? Let us know in the comments below!