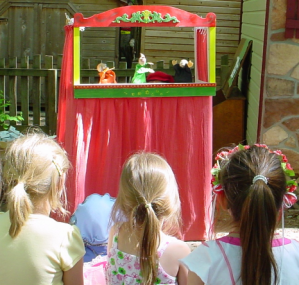 shows, whether they’re 3, 33, or 103. Happily, the traditional art of puppetry is alive and well in the San Francisco Bay Area, so don’t miss out and mark your calendars! We’ve rounded up some of the best troops, their websites, and their upcoming dates.

San Jose-based puppeteer Nick Barone has been delighting audiences with his puppet shows for almost 20 years.

The Puppet Art Theater Company from Sacramento  tours all over California and always draws a big crowd. Here’s their 2011 schedule.

Tony Borders, also from Sacramento, specializes in puppet shows that are not only hilarious but also teach kids good values.

Get ready to be enchanted by the East Bay’s Fratello Marionettes puppet duo, some of whose artistic creations are three feet tall. Check out  for more about their shows.

Children’s Fairyland in Oakland’s Storybook Puppet Theater will be showing ‘The Tale of Peter Rabbit through March, ‘Anansi the Spider’ through April, ‘The Reluctant Dragon’ from May 18th through June, ‘Young King Arthur’ through July and August, ‘Beauty and the Beast’ through September and October, and ‘The Velveteen Rabbit’ through November and December.

Take a look at their website for specific times and dates. Admission to Fairyland is only $8, and babies aged 1 and under are free.