The Seattle Chinatown-International District—affectionately known as “the C-ID” to locals—is a historic, cultural destination and a gastronomic mecca. It is also a wonderland for kids, filled with unique things to do including parks, curio and toy shops, plus the famous food that has nourished local families for decades. The Seattle Chinatown-International District is so user-friendly that’s it is easy to enjoy on a whim, but its historical complexity calls out for expert advice.

We were lucky to have Tyler Moriguchi—grandson of Fujimatsu and Sadako Moriguchi, founders of neighborhood anchor, Uwajimaya—guide us through the area’s most kid-friendly aspects. Moriguchi has been a part of this vital Seattle community his entire life. “The Chinatown-International District has always had a special place in my heart and connection to my family,“ he said. “It is a dynamic, vibrant neighborhood, and it’s been amazing to see it grow and evolve over the years.” If you’re ready for a new adventure, read on for the most kid-friendly places to eat, play and shop in Seattle’s Chinatown-International District.

Where to Play & Learn in the Chinatown-International District 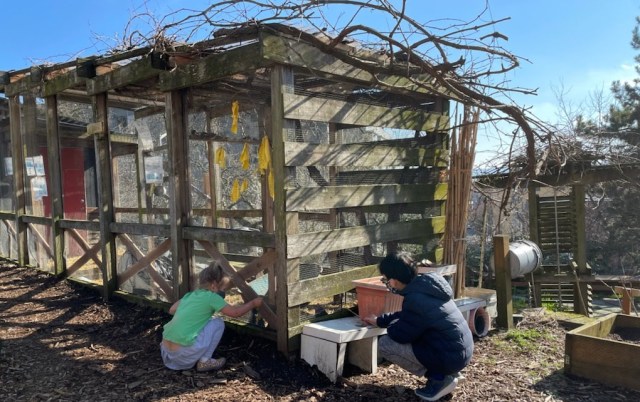 Danny Woo Community Garden and Kobe Terrace
Imagine a park where the locals are also farming. Meet the community as they tend their chickens, grow their flowers, and farm vegetables. There is also a Children's Garden in which 265 K-12 children go through Interim's Seed-to-Plate program, focused on raising sustainable foods, promoting better nutritional choices and teaching children the science behind food production. Kobe Terrace, replete with Mt. Fuji cherry trees, is a must-visit, especially in spring.

Hing Hay Park
When it comes to this C-ID Seattle park, the name says it all. Hing Hay means "Celebrate Happiness Public Park." Bring your junior kung fu and karate practitioners for outdoor fun. Hing Hay Park is the spot to work on these and other martial arts or practice Tai Chi or gentle meditation. Enjoy a lunchtime serenade from the local musicians.

Nihonmachi Alley
Nihonmachi translates as "Japantown," one of the many names for the area. Learn about the inspirational local history with murals featuring four neighborhood businesses that continued courageously by families returning from World War II incarceration: Kokusai Theatre, Maneki Restaurant, Sagamiya Confectionary and Uwajimaya Grocers. You'll find Nihonmachi Alley on the north side of Jackson Street between 6th and Maynard Avenues. 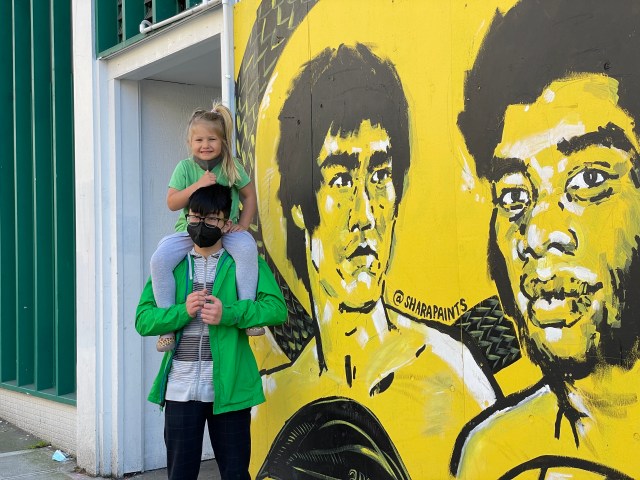 Wing Luke Museum of the Asian Pacific American Experience
May is Asian Pacific American Heritage Month, and Wing Luke Museum is an invaluable source of Asian history, both local and abroad. More than a museum, it's an interactive part of the community. Check out their Chinatown Discovery Tour or Seasonal Food Tour for in-depth experiences. For exhibits, the kids will love A Dragon Lives Here, the continuation of their popular Bruce Lee series, focusing on his time in Seattle.

Seattle Kung Fu Club
For 60 years the Seattle Kung Fu Club has been teaching local adults and children to develop "discipline for your health and to learn respect, not just how to fight.” Sign up for classes or stock up on supplies and gifts.

Seattle Pinball Museum
Pinball wizards can play to their little heart's content at this C-ID marvel. One admission price unlocks over 50 machines dating back to the 1960s. Kiddos need to be least seven years old to play.

Where to Eat in the C-ID 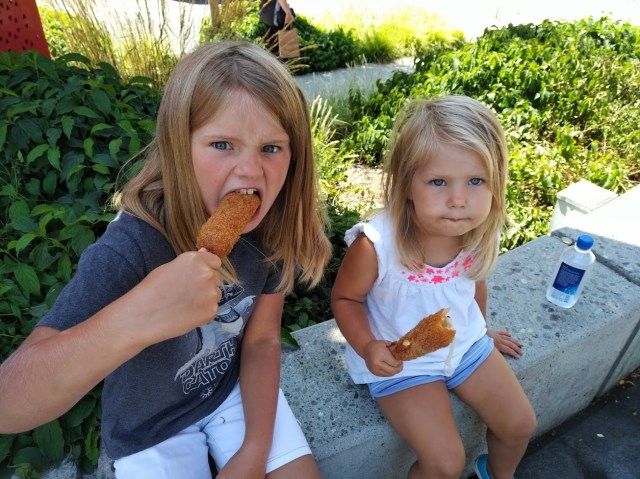 Uwajimaya
Start off your Chinatown-International District tour with a local legend. Uwajimaya provides 35,000 square feet of Asian specialties, with roots in the region since 1928. Grab regional delicacies for a picnic in the area, stock up on groceries for later or get a hot snack to go. For adventurous little eaters, take a world tour of Asian cuisine inside the brand new food court. The tinies will love Bean Fish—waffles shaped like fish, stuffed with savory or sweet goodness. Try the “K-Pop” with Roi Choi’s Kogi Korean BBQ Beef or “Elvis” with (of course) peanut butter and banana. Other wonders in the magical food hall include Dochi–crafted mochi donuts, Aloha Plates–Hawaiian plate lunches and Jardin Tea–warm, liquid happiness in a mug. Arrive hungry!

Chungchun Rice Hot Dog
Chungchun Rice Hot Dog sells the best dogs on sticks in Seattle. They serve to-go only, so take a number and stand in line patiently with the other dedicated patrons. Trust us, these Korean-style hot dogs are worth the wait. The kids will dig the bazillion flavors, including Cheddar, Volcano Dog and Original—which is chewy on the inside, crispy on the outside and everyone’s fave. The Sweet Potato, a sweet and salty treat with gooey cheese surrounded by yams is another cool twist. You can also add powdered sugar to just about anything. Just up the street, Hing Hay Park is the perfect place for the kids to enjoy their treats.

Panama Hotel and Tea House
If there is a historical epicenter to the Seattle Chinatown-International District, it's the Panama Hotel and Tea House, which received recognition in the novel Hotel on the Corner of Bitter and Sweet, by Jamie Ford. The charming 1910 hotel still operates as a hotel and teahouse (with pastries and a full bar), and the assortment of international travelers lend an aura of intrigue. Echoes of the past still reverberate strongly in the antique rooms. Locals leaving for internment camps left their belongings behind in the basement, which visitors can view through a clear floor. Some of them never returned. Ask owner Jan Johnson about the National Historic Landmark's rich past. She restored the hotel to its previous condition before internment, giving a historical peek into pre-WWII Seattle and paying homage to the community. 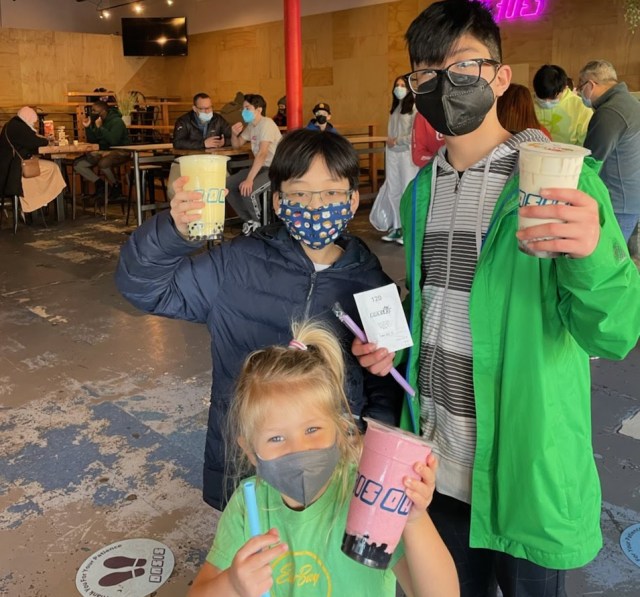 Oasis Tea Zone
Go beyond boba at Oasis. Slurp Taiwanese-style hot, iced and blended bubble teas with oodles of flavors, from honeydew to chrysanthemum. Be prepared for a wait—the lines can be long to enjoy these tasty treats. Kids know this is the place for that perfect sweet drink. Make new friends with other boba fans or play pinball at the machines in the back.

Fuji Bakery
This Japanese artisan bakery provides hungry customers with the highest quality ingredients, many imported from around the world. The window shopping is amazing, and taking a bite is even better. Order the Azuki buttery brioche doughnut with organic red bean paste. You'll thank us later.

Tai Tung Restaurant
This is the part where you can teach the kids that not only did Bruce Lee have roots in Seattle, but also yes, Kareem Abdul-Jabbar co-starred with him in a martial arts movie. You've arrived at Seattle's oldest Chinese restaurant and still one of the best. The food and atmosphere are throwbacks in the best possible way to the Chinese restaurants you might have enjoyed as a kid. Tai Tung has been serving regional dishes from the Middle Kingdom for over 75 years. 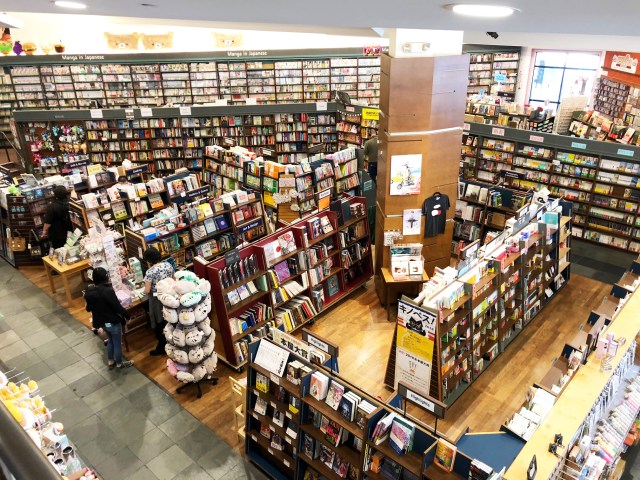 Kinokuniya Seattle
This must-visit Japanese bookstore is also located inside Uwajimaya. It's the place to stock up on art books, anime, magazines, K-POP CDs, Japanese stationary and a whole lot more. Find gifts for everyone for every occasion.

Sairen
Beautiful dolls, jewelry from local designers, kimonos for kids, dim sum magnets, and interactive kids' toys from Hawai'i fill this stylish shop. Stop in to browse, but be prepared, you're kids will definitely find a few "must-haves" when you do.

Kobo
Next door to Sairen, Kobo at Higo is the place to find that perfect gift. The gallery-style mercantile is full of fine crafts, decorative items and jewelry, both from Japanese and local artists.

Daiso
Don't call it a dollar store; it's a 100-yen store. And it is stocked with thousands of Japanese, Chinese and Korean items, most of which cost about a dollar. Founded in 1977, Daiso now has over 5,000 locations worldwide.

RELATED STORIES:
18 Asian American-Owned Businesses & Non-Profits We Think You’ll Love
Your Family Guide to Kid-Friendly Restaurants in Seattle
Discover a Museum That Feels More Like an Arcade
Your Guide to Seattle’s Best Parks & Playgrounds
Our Big, Juicy Guide to Where Kids Eat Free (or Super Cheap)