If the thought of ramen takes you back to penny-pinching college years when the packaged Styrofoam strips were as common in your kitchen as cheap white wine, it’s time to rediscover the magic of authentic Asian noodles. The heart of noodle bars beats in Seattle’s International District, with its dozens of family-friendly restaurants dishing up hot bowls of udon or rice noodles steeped in tangy sauces and comforting broths. And there are plenty of other favorite Asian-inspired eateries across the city churning out fresh takes on classic noodles that kids will crave as much as parents. 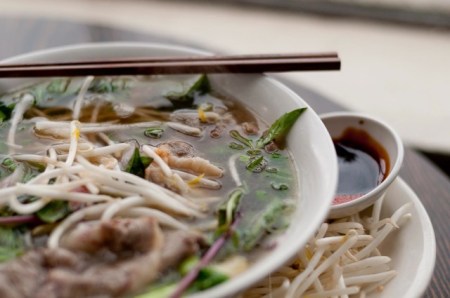 Later in the evening, the space transforms into a Capitol Hill hipster hideout, but during lunch and early dinner hours families can dig into oversized bowls of pho with local, quality brisket or oxtail from Painted Hills Farm. A best bet for kiddos is the chicken vermicelli bowl, with caramelized shallots and peanuts sprinkled on noodles and meat, then cooled off with cucumber slices.

Hue Ky Mi Gia
It’s only been open for three years in Seattle, but Hue Ky Mi Gia has quickly become an International District institution. Expect a full house with plenty of kids during prime hours. The Chinese and Vietnamese-style noodle house serves ‘em up in every conceivable style: vermicelli and egg varieties come stir fried, dry, or in broth.

The menu reads like a small dictionary and features meats kids will likely avoid (but be fascinated with nonetheless) like fish balls and pig intestines. They’ll be all over heaping mounds of hot noodles topped with bright red spareribs or chopped chicken. Note: Hue Ky Mi Gia is closed Tuesdays. 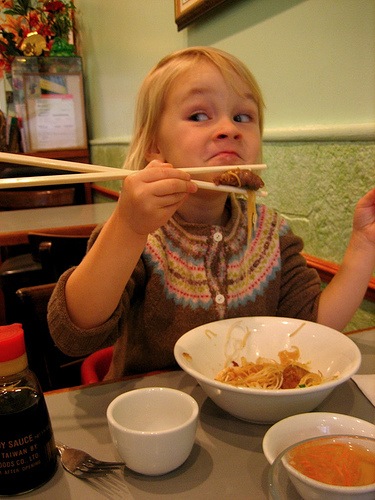 Jhanjay Vegetarian Thai Cuisine
Sometimes, a vegetarian restaurant manages to prepare tofu and veggie-based dishes so well that the biggest little meat eater will fall in love. Enter Jhanjay. Both the Ballard and Wallingford locations work for families, with the Ballard Avenue space offering more wiggle room and a cheerful staff that is known for pinching cheeks of babies.

Kids averse to tofu won’t be able to resist the phad woon sen, with glossy thread noodles hugging the fried soybean cakes mixed with eggs, tomatoes, and onions. If you happen to have a child who inhales vegetables, opt for the bright Monk’s Noodles with yakisoba, zucchini, spinach, and green beans.

Black Pearl
A Wedgwood favorite known for its homemade chow mein noodles, Black Pearl is light on atmosphere with food that is heavy on flavor. Kids can watch the hustle and bustle of kitchen staff slamming out to-go orders while cozying up in a booth next to the window.

For around ten dollars, order the hand-cut-to-order chow mein and expect a portion two adults with empty stomachs can barely polish off. Kids can easily split a noodle dish and expect leftovers for tomorrow’s lunch. Pick chicken, pork, tofu, shrimp, or beef and tuck into the dense, thick noodles that are just long enough to loop around your fork. 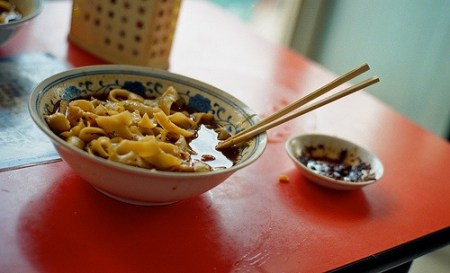 Revel
Owned by famed chefs and married duo Rachel Yang and Seif Chirchi, Revel is frequented by Top Chef judges, restaurant critics, and foodies from near and far. The owners also happen to be the parents of two young children and welcome kids to the bright, open room with its Northwest-meets-Korea menu.

If you catch the buzz and want to try your hand at making authentic ramen or egg noodles at home, head to Uwajimaya in the International District, Bellevue, or Renton or H Mart in Lynnwood for the area’s best selection of dried noodles imported from Asia.

Where do you and your fam go for noodles?