You’ve seen them at the zoo lounging around in trees, and you’ve probably cooed at least a little over their cute faces but sloths are full of surprises. Read on to learn a few things you might not know about one of the slowest mammals around. 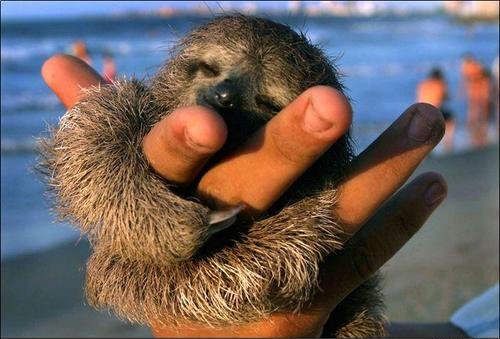 The scientific name for a two-toed sloth is Choloepus didactylus (nope, not “Slowy Jones”). There are two species of two-toed sloths: C. didactylus and C. hoffmanni. Both are native to Central and South American tropical rainforests.

1. Sloths really are slow. So slow, in fact, that in the humidity of their native climate an algae actually grows on their fur. This gives them a greenish hue, which acts as camouflage.

2. Sloths, moths and algae have a beneficial relationship: The pyralid moth is a species of moth that lives in the sloth’s fleece. There is also an algae species that grows in the grooved hair of the sloth. Scientists believe that the moth transports nutrient-rich waste from the sloth’s poop to fertilize the algae. In other words, the moths are algae farmers on the sloth’s back. And guess what else? The algae is a key source of food for the sloth!

6. Sloths cannot shiver to stay warm, and so have difficulty maintaining their body temperature on rainy days.

7. Sloths see better at night than in the day and they have very poor hearing. They rely on their sense of smell to locate food and other sloths.

8. Sloths come down from their canopy about once a week to pee and poo unless there is a danger or predator. If that’s the case they do it from the trees!

9. They are good swimmers, especially the backstroke.

10. While they are very quiet in general, if scared they will hiss or moan.

13. Sloths usually mate and give birth while hanging in trees. Mothers will birth their babies either on the ground upside down in a hanging position. After it is born the infant grabs onto the mother’s fur and makes its way to her chest to nurse.

1. Three-toed sloths are better swimmers than their two-toed relatives.

2. They change trees up to four times a day.

3. The are diurnal, meaning they are awake either day or night. Two-toed sloths are nocturnal.

Want to learn more about these amazing animals and how you can help protect their habitat? Visit the WWF’s sloth page.

Do you have a cool sloth fact or story? Share it with us in the comments below.

Extra thanks to the Education Department at the San Francisco Zoo for sharing their sloth facts.