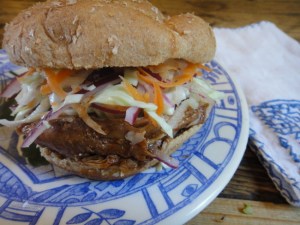 Pulled Pork in the slow cooker is so delicious and simple, you’ll be shocked not every person on the block is having it for dinner every single night of the week. It’s delicious and so versatile. Plus the cabbage slaw adds a nice crunch to the sandwich (or can be eaten on the side) for veggies that definitely don’t taste like the common variety broccoli. Points for creativity and yum-factor.

A few notes (and tips!) on the recipe:

1 medium red onion, peeled and cut in half, divided

4 cups shredded green cabbage (about ¼ of a large cabbage)

Method:
1. Pour the apple cider and 1/2 cup of the barbecue sauce into the slow cooker and stir until combined.

2. Cut 1 of the onion halves in half again and add to the pot along with the pork and the garlic.  Nestle everything down into the sauce. Turn the slow cooker to low and cook for 4 hours or until the meat is very tender and can easily be shredded with a fork.

3. Measure out 1/4 cup of the cooking liquid and set aside. Transfer the pork to a medium bowl until it is cool enough to handle.

4. While the meat cools, make the slaw.  Cut the remaining 1/2 onion into thin slices.  Mix together the cabbage, apple, carrot, and onion in a medium bowl.

5. In a small bowl, whisk together the apple cider vinegar and sugar, stirring until the sugar is largely dissolved. Pour the vinegar over the cabbage, add a couple of turns from your pepper grinder, and toss well.

6. Once the meat has cooled a bit, pull it apart with your hands until the whole tenderloin is shredded.  Put the meat in a medium bowl and add the remaining 1/2 cup of barbecue sauce and the 1/4 cup of reserved cooking liquid.  Stir until the meat is evenly coated with the sauce.

7. Divide the meat over the bottom halves of the hamburger buns.  Pile a generous portion of slaw on top of the meat and cover with remaining bun.  Serve any extra slaw on the side.

Katie Sullivan Morford is a mom, food writer and registered dietitian.  You can find her family-friendly recipes and kitchen wisdom at Mom’s Kitchen Handbook