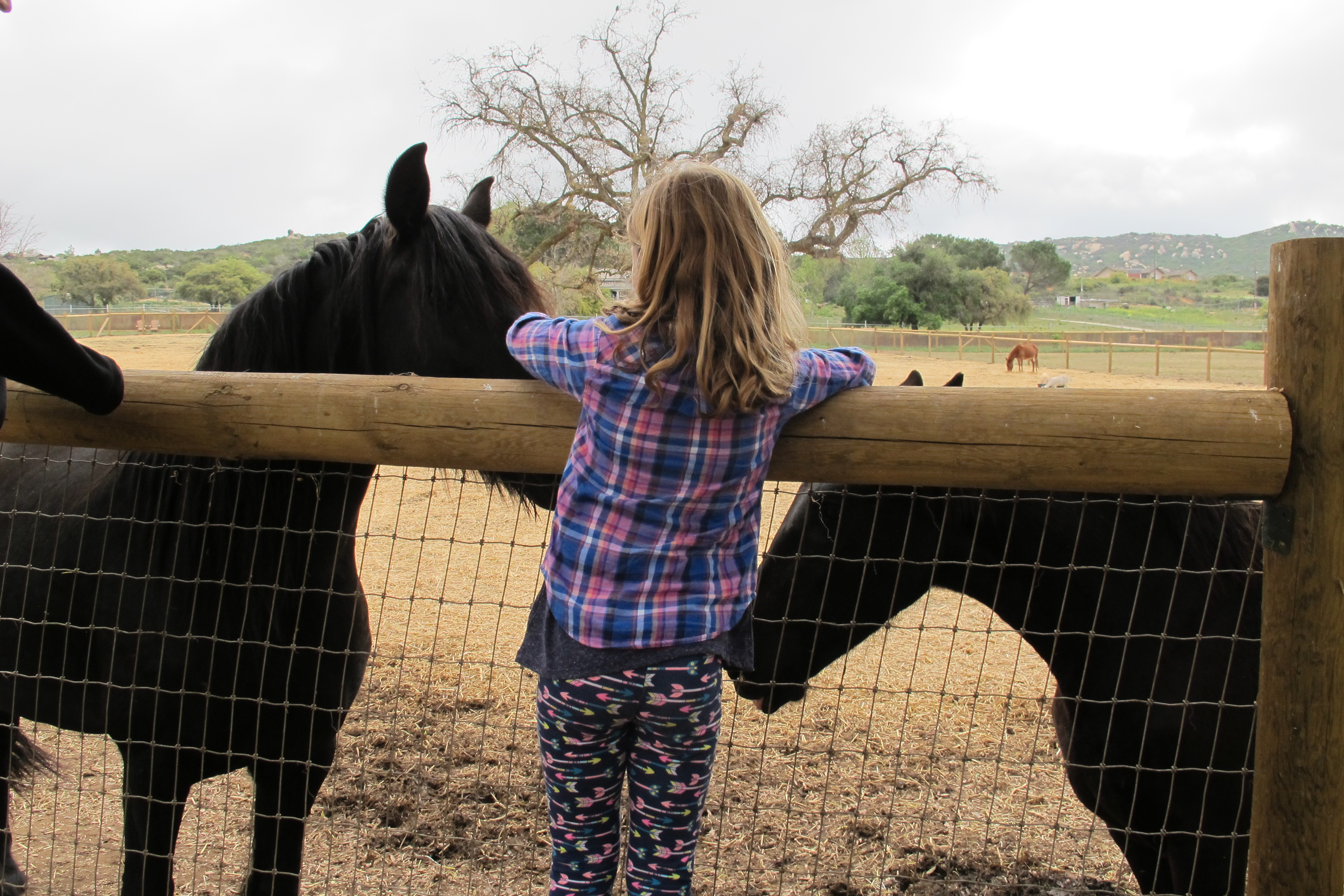 Wild about animals? Then your family is never going to want to leave the Children’s Nature Retreat. Located just outside of San Diego in Alpine–– you’ll feel a world away in this serene animal kingdom of indescribable beauty. Your clan will get to feed, pet and bond with 95 domestic, rescued livestock from around the world including zebras, camels and miniature horses. Read on to learn about your new favorite escape. 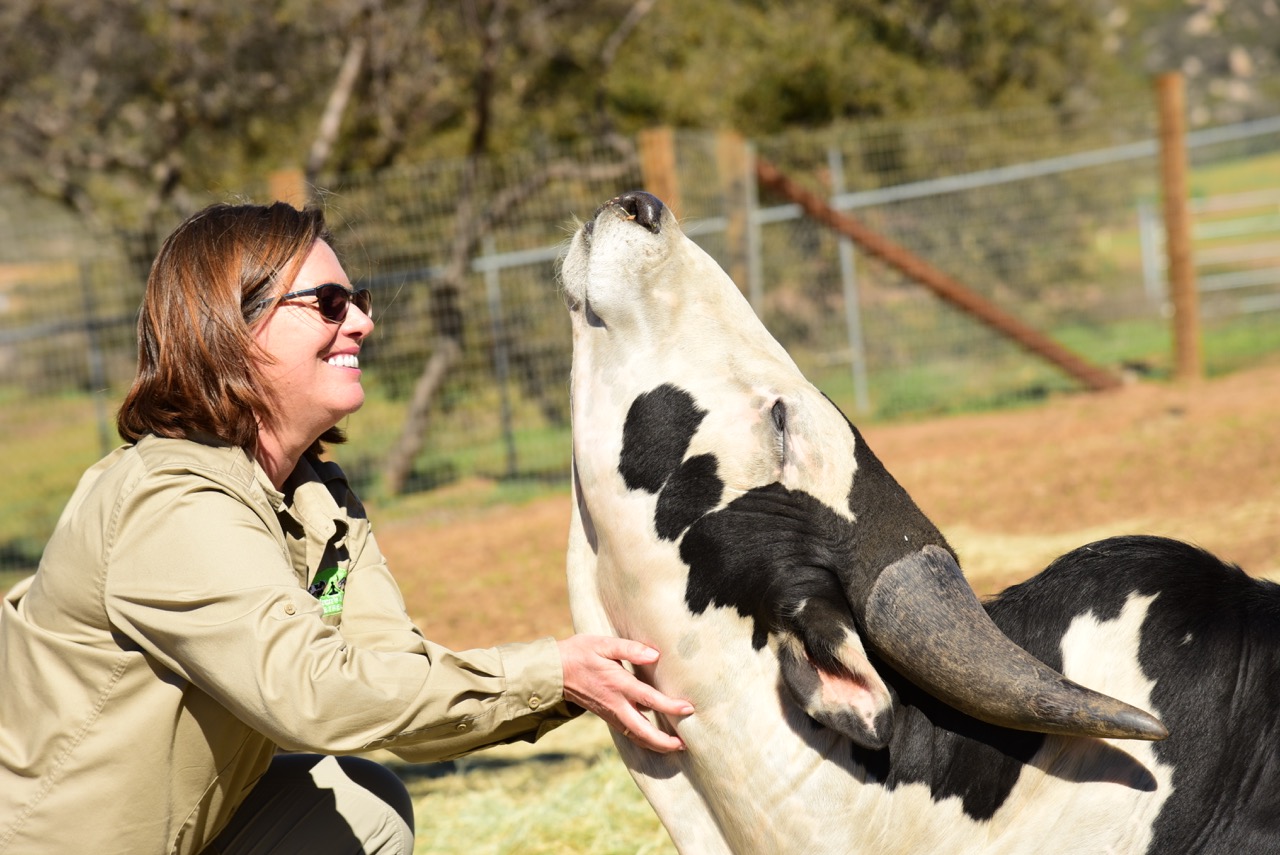 She Bought a Zoo!
Executive director of the Children’s Nature Retreat, Agnès Barrelet’s love and enthusiasm for animals and children is palpable. She was inspired to open this sprawling, 20-acres of natural habitat for animals after watching the movie We Bought a Zoo. Agnès encountered an animal rescue that needed more space, so she searched for a larger location and built the Children’s Nature Retreat. Agnès’ two passions are helping animals and children, so she created the Retreat to be a safe haven for livestock, domestic and equine animals, while also being somewhere that kids can visit to foster a greater understanding of nature and an affinity for animals via “unstructured exploration.”

Agnès has already hosted over 500 underprivileged children and children living in distress at the Children’s Nature Retreat via her affiliate non-profit Hands United for Children. She also holds special visits for children with autism and for pediatric cancer patients so kids can come experience a therapeutic, heartwarming connection with animals. 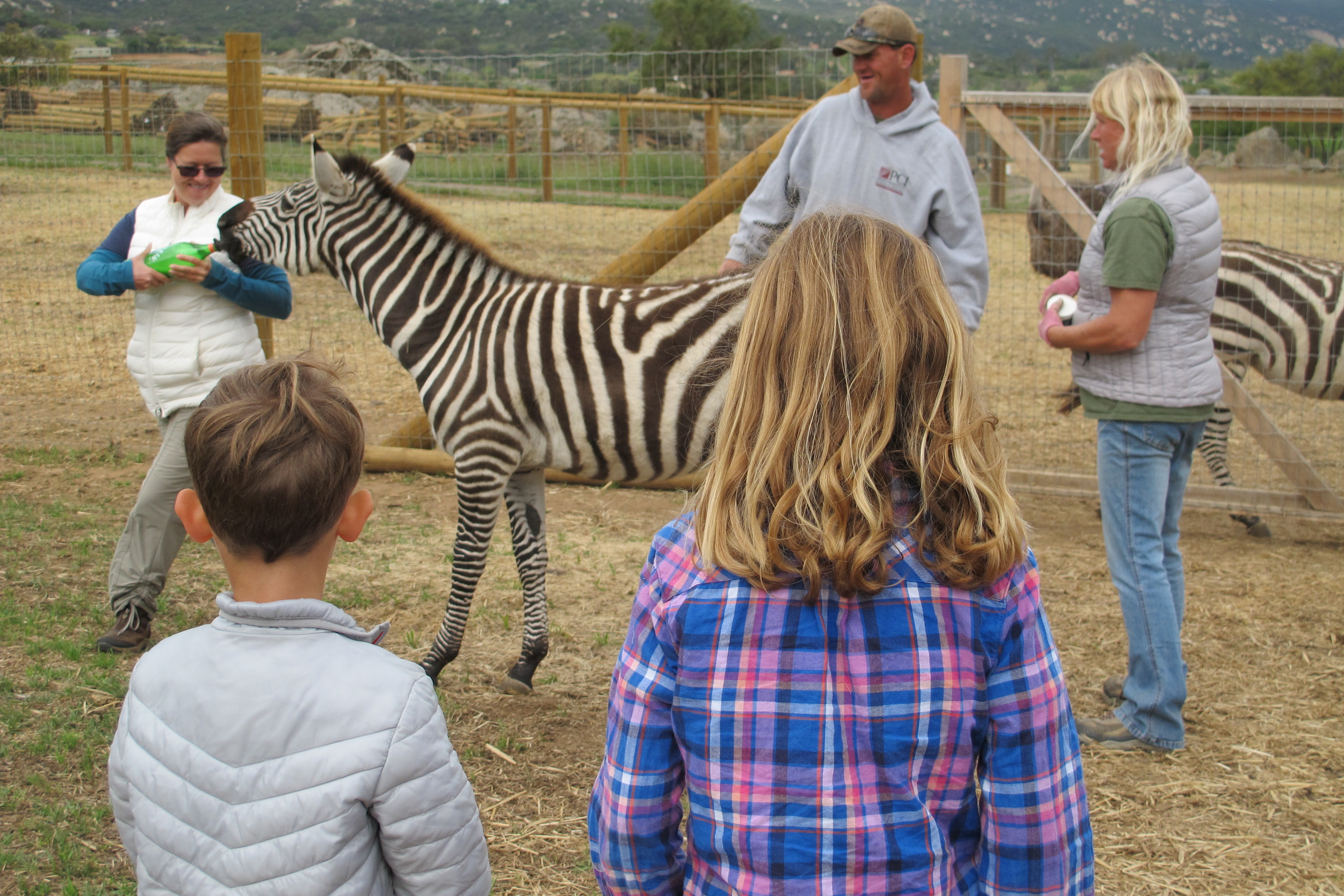 Animal Kingdom Access
16 species and 37 different breeds of animals call the Retreat home. Several have been rescued from harsh conditions and are now thrilled to be cared for in such a beautiful environment. There are Arabian Camels in the Camel Oasis, the resident zebras “Bamboo” and “Hope” and some Watusi cattle in the African Grasslands, Friesian Horses, mules, cows, Alpine goats and alpacas in the Big Farm, pigs, chickens and bunnies in Barnyard Alley, ‘Big Daddy’ the Sulcata Tortoise in Tortoise Landin’… and little ones will love the Miniature Farm area most of all–– where there reside five miniature horses, Scottish Galloway mini cows and miniature goats. 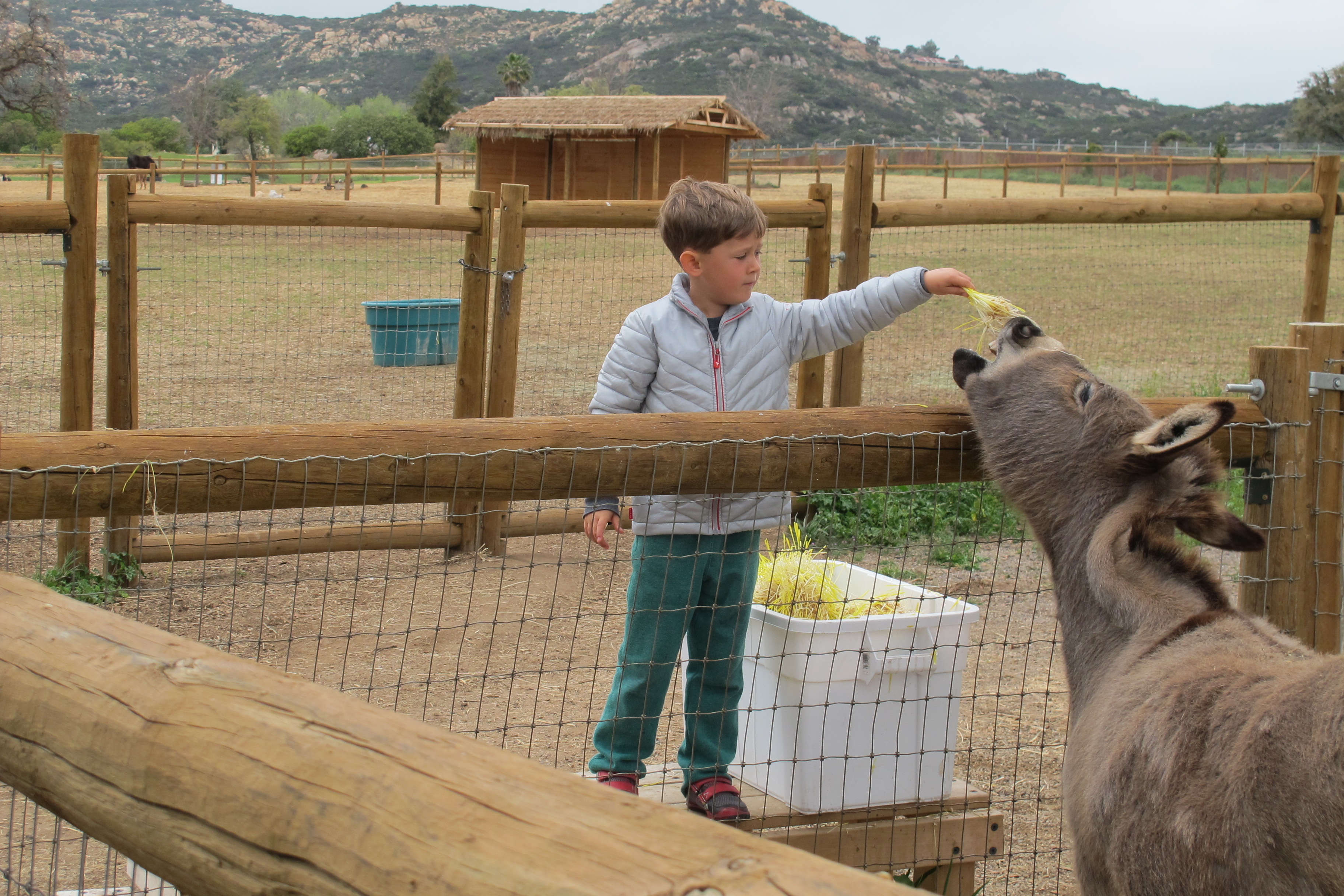 One With Nature
Kids will have the opportunity to learn about the different areas in which the animals reside and experience them at close proximity. Animal food stations of sprouted barley are set up in white bins all over the Retreat and kids can grab a handful and feed and pet the animals ’til their heart’s content. There are benches little ones are able to step up on to reach the animals in their enclosures to feed and stroke them. 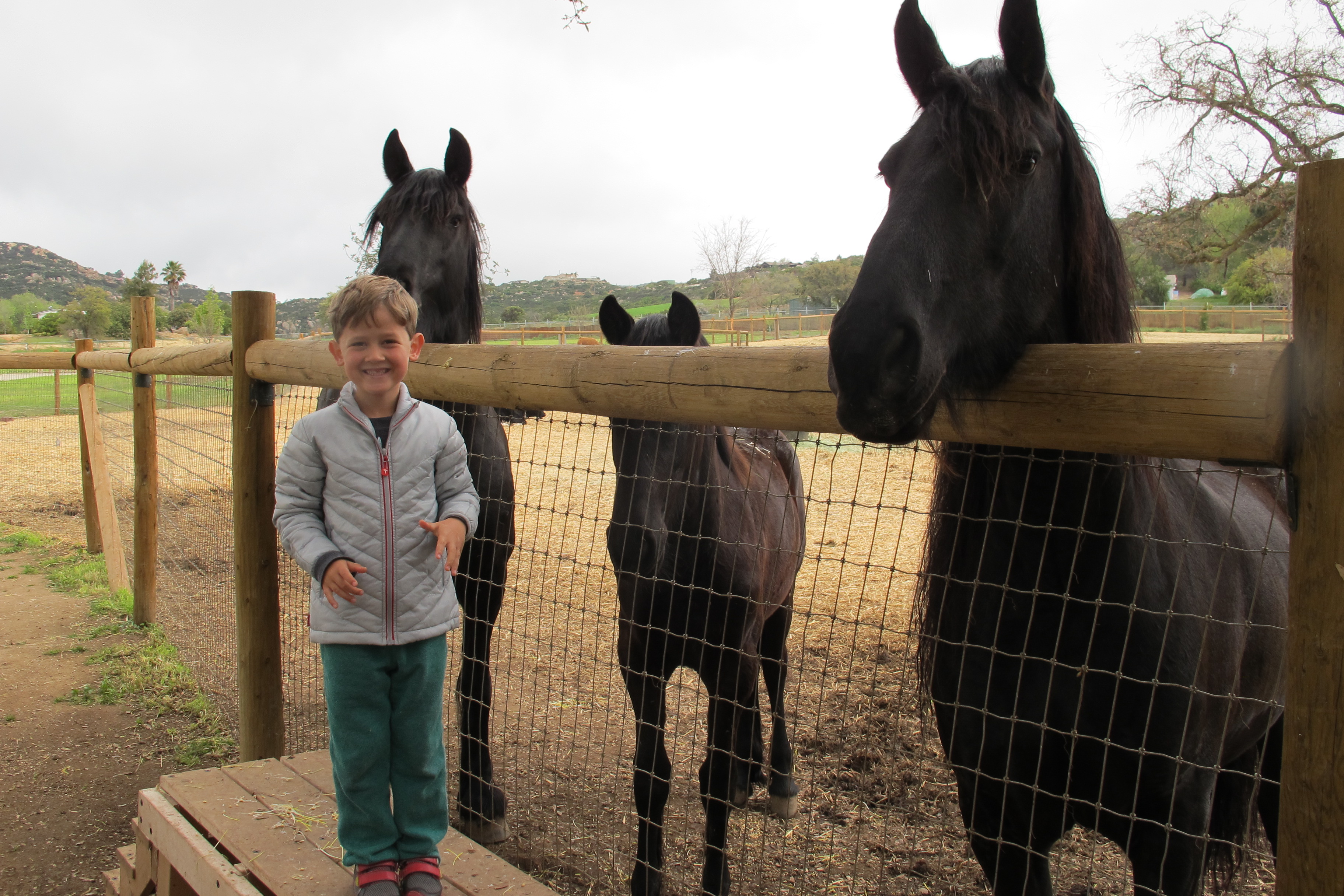 Horsing Around
It’s amazing how each and every animal at the Children’s Nature Retreat is friendly, as if they all love children and want to connect with them. Even the resident bull wandered over to have us feed and pet him. The magnificent Friesian horses are also particularly interested in canoodling and photo ops. Your kids will be in heaven with all of the animal magnetism and interaction.

Insider’s Tip: The zebras and ostriches can not be pet in the same manner as the other animals at the Retreat, but visitors are able to feel their nose or their feathers and feed them through the fence. 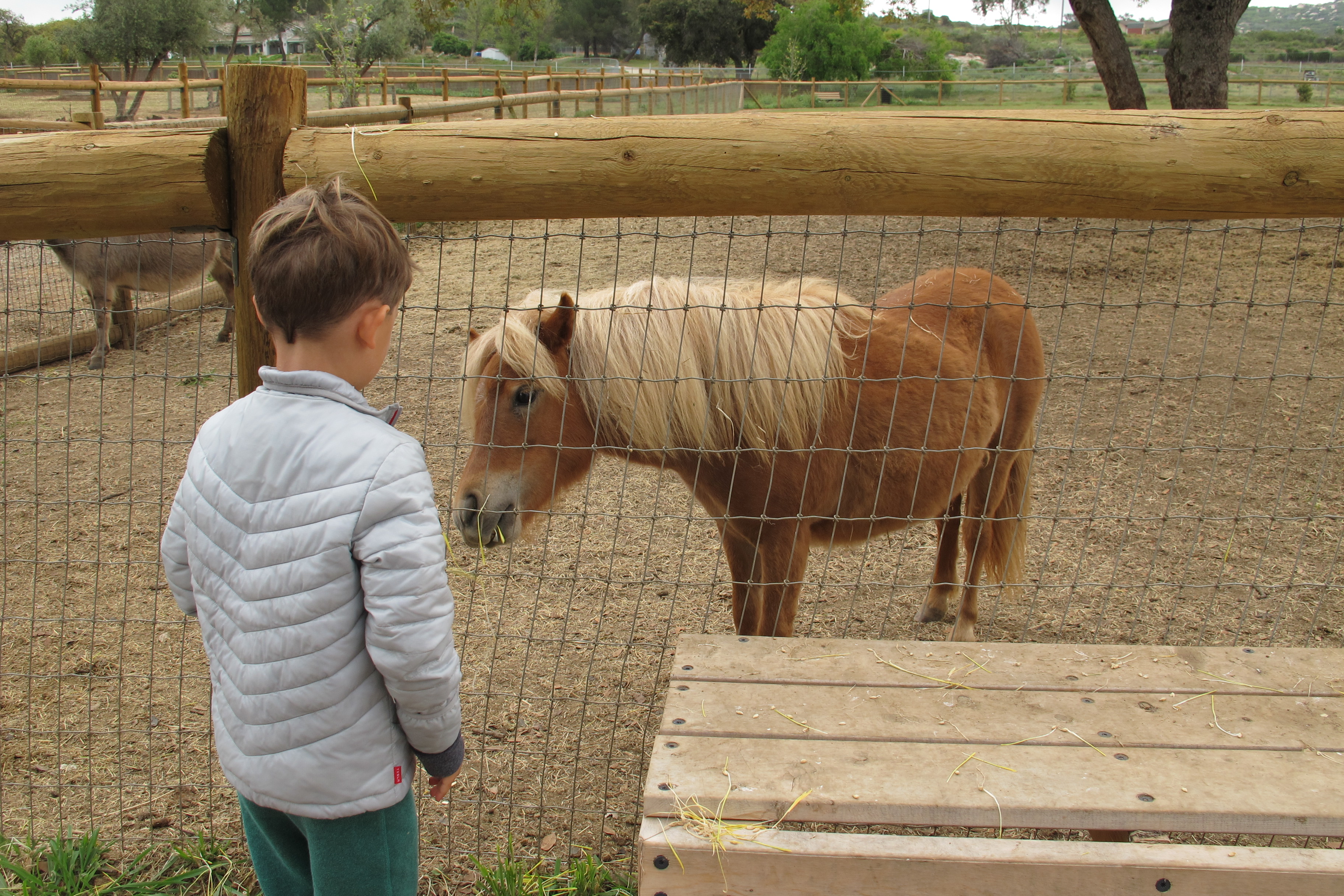 Therapeutic Interaction That’s Good for the Soul
The energy of the bucolic Retreat is one of total leisure and immense peacefulness. You can stroll through the tranquil grounds at your own pace and talk with and pet the animals as much as you’d like. If little ones are timid at first, they may feel more at ease among the many miniature animals roaming about. 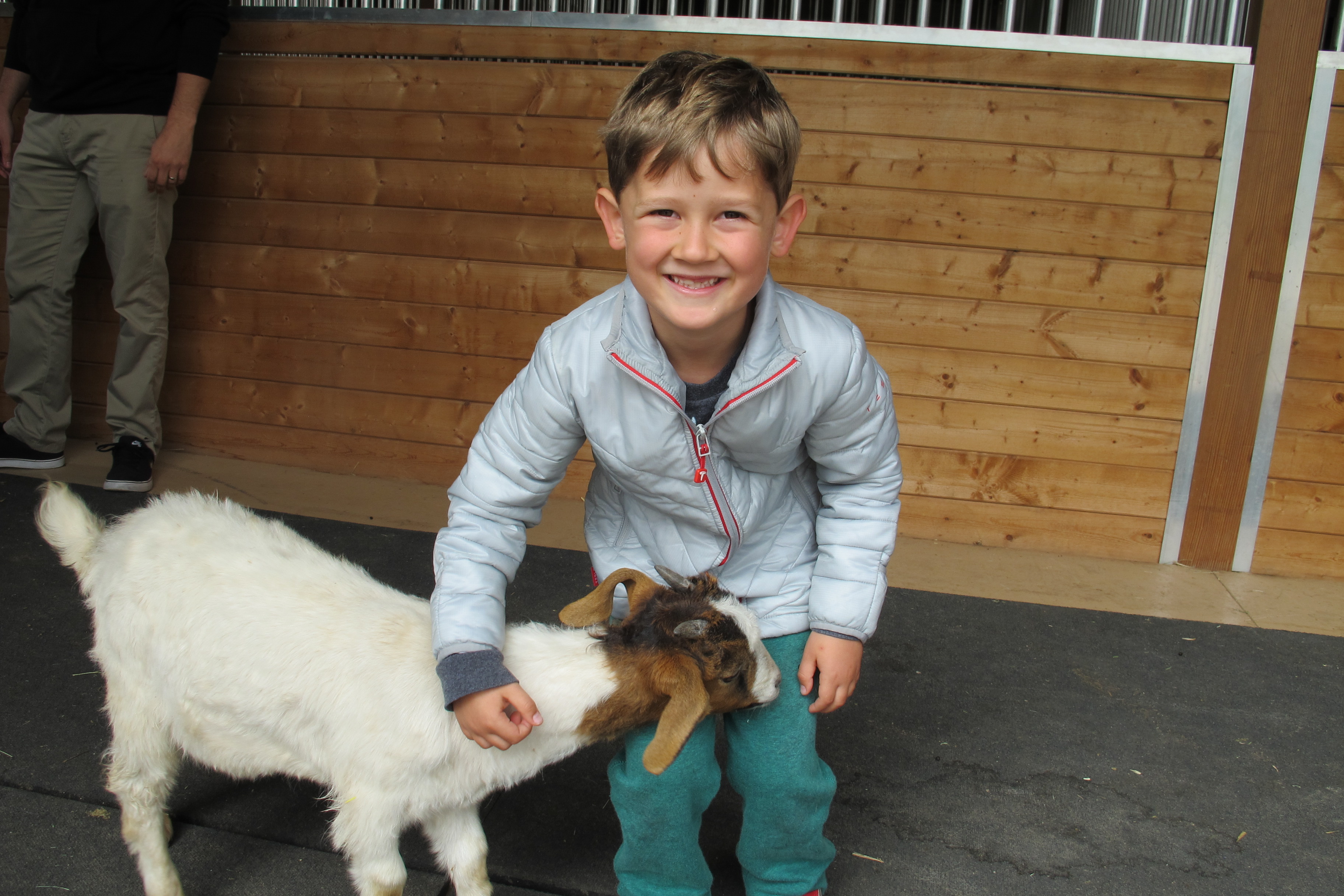 Free Range Goats & Chickens
One of the countless wondrous aspects of a visit to the Children’s Nature Retreat is that animals roam and wander at will. Akin to a scene from Charlotte’s Web, the farm setting lends itself to a goat or chicken gently approaching your kiddo for a happy hello or a cuddle. 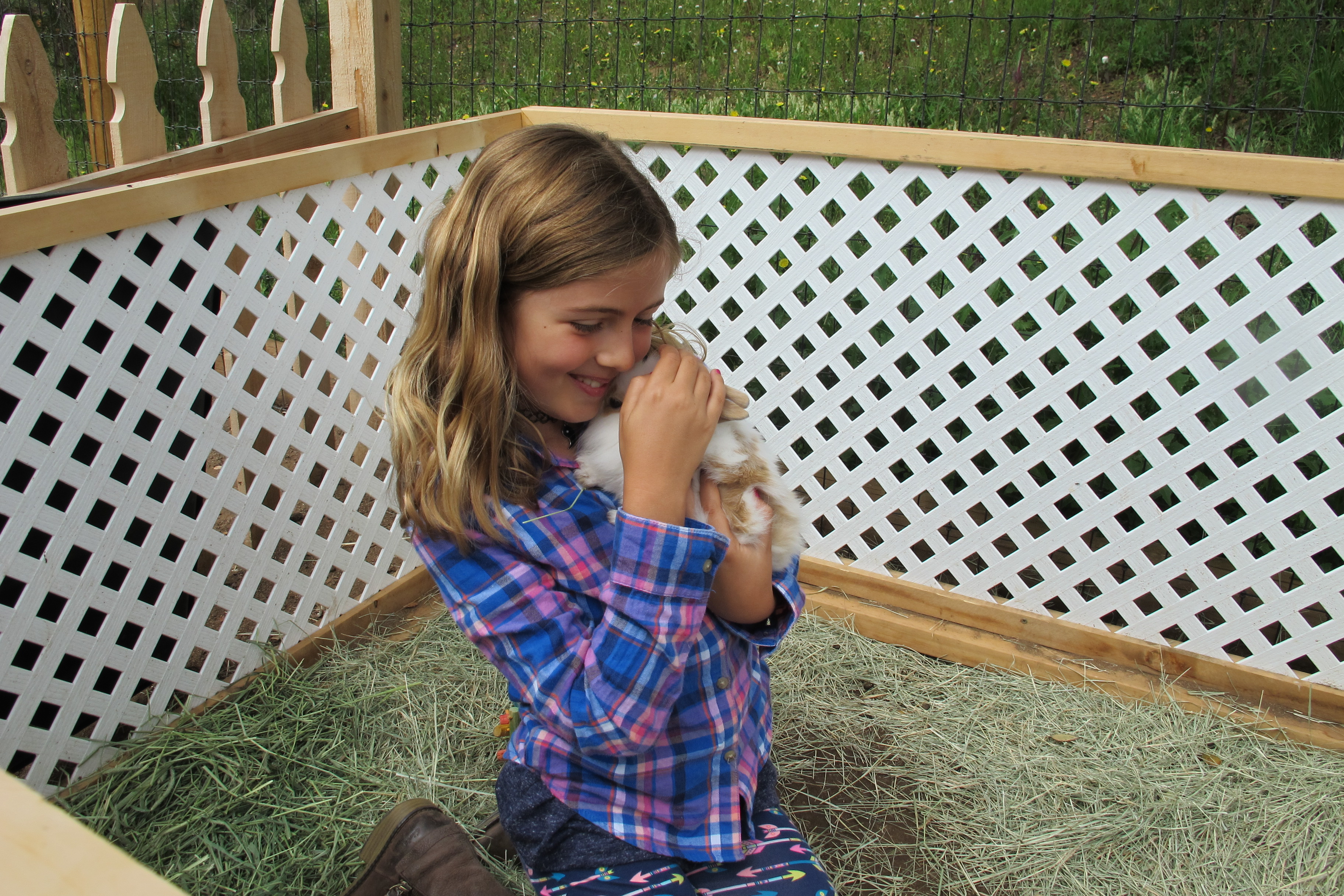 Up Close & Personal Pass
Enhance your visit with the up-close and personal pass which gives you the opportunity to go inside one of the enclosures (except the Africa enclosure). You’ll get to experience individual interaction with the animals in either Barnyard Alley, Tortoise Landing, Mini Farm or Big Farm. 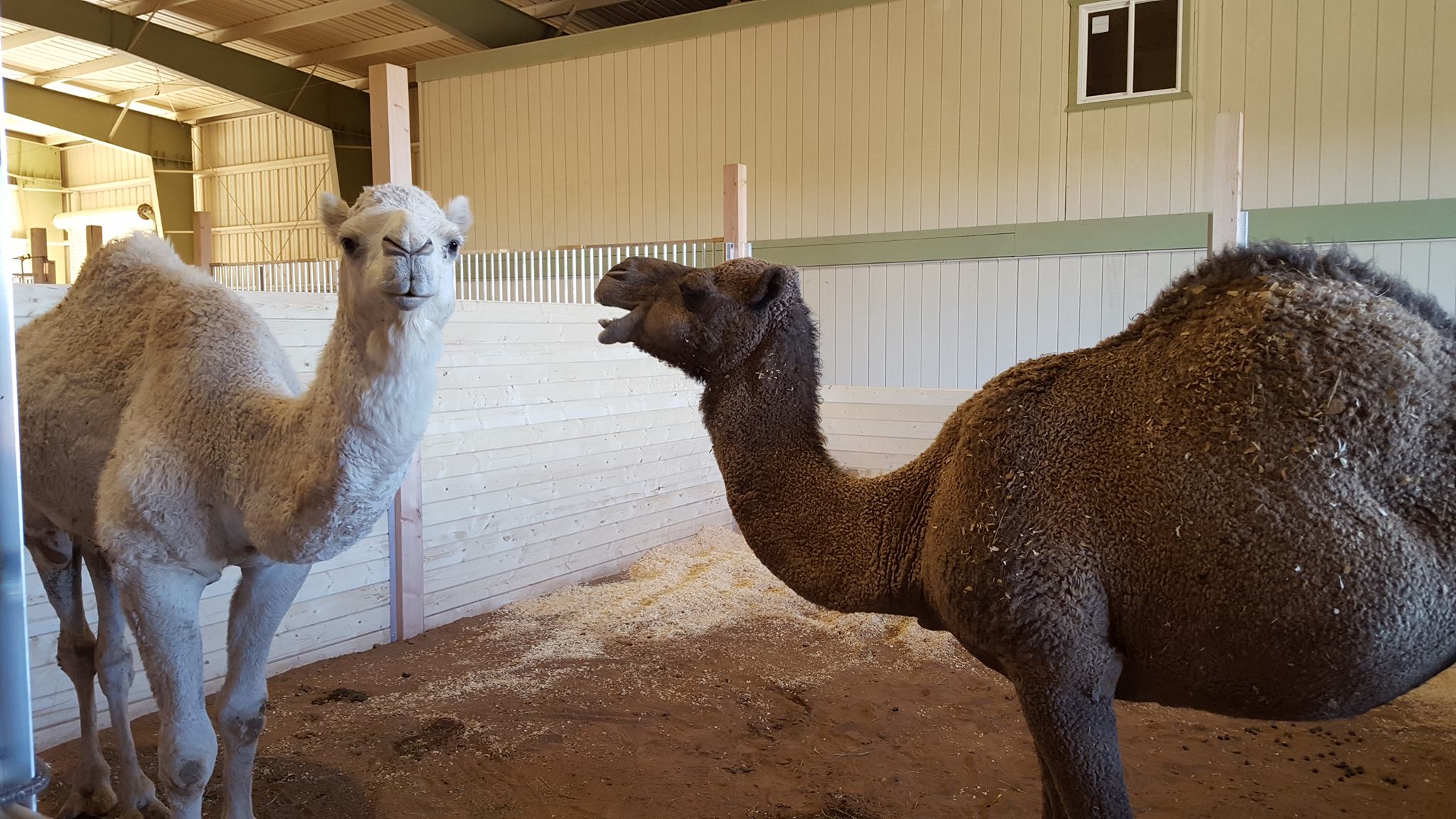 Rare Encounters
The Children’s Nature Retreat is home to a rare white camel named Banfora who is one of only ten white camels in the entire United States! 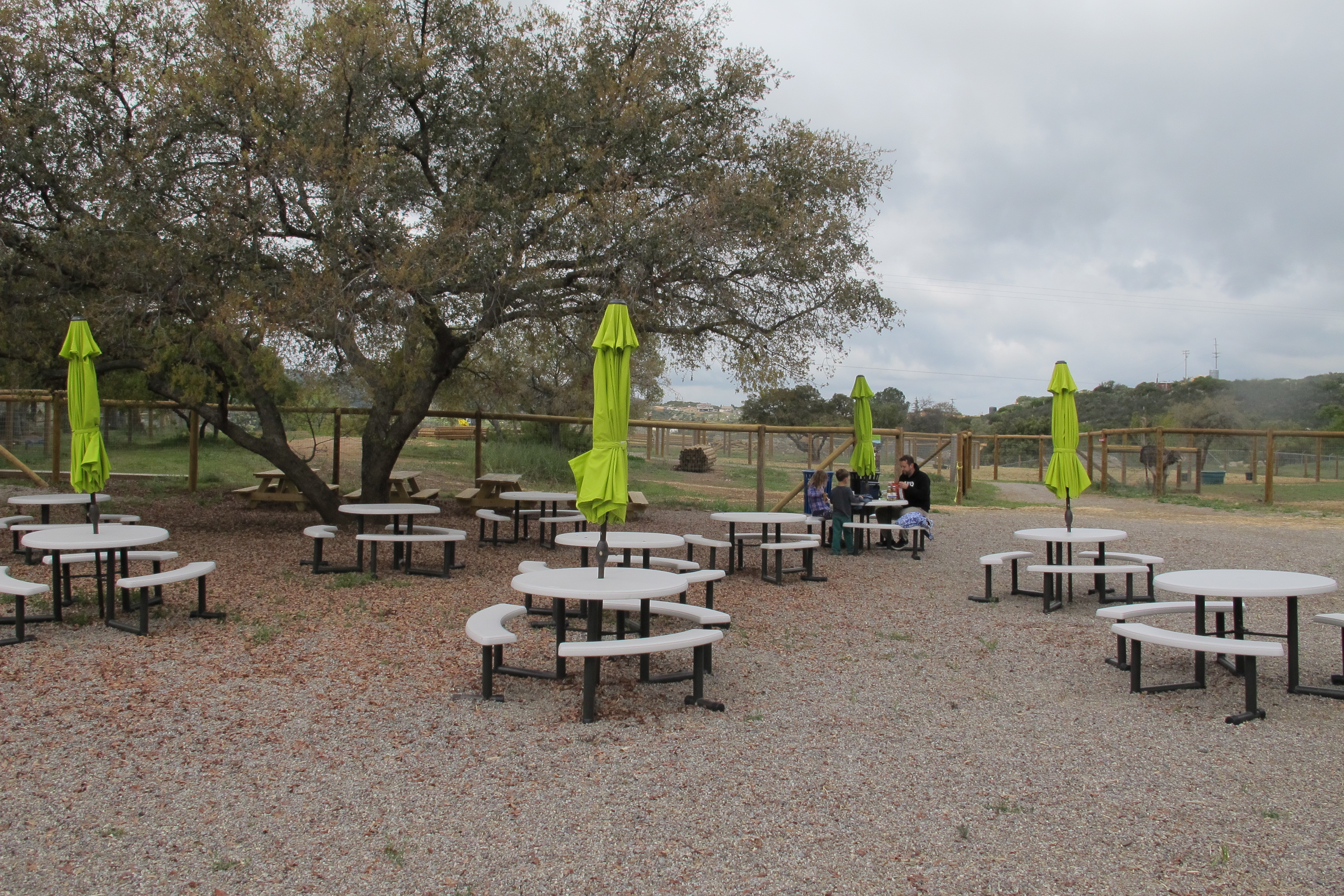 Life IS a Picnic
Be sure to pack snacks, drinks, a picnic lunch and water. There’s a small boutique shop on site where you can buy pre-packaged snacks and drinks, but you’ll want to have a picnic at the tables by the great oak tree, or you can also bring a blanket and choose a location to set up and eat elsewhere on the grounds.

Tip: Wear sunscreen and pack a hat and sunglasses for sunny days––and wear close-toed shoes due to the dirt pathways. 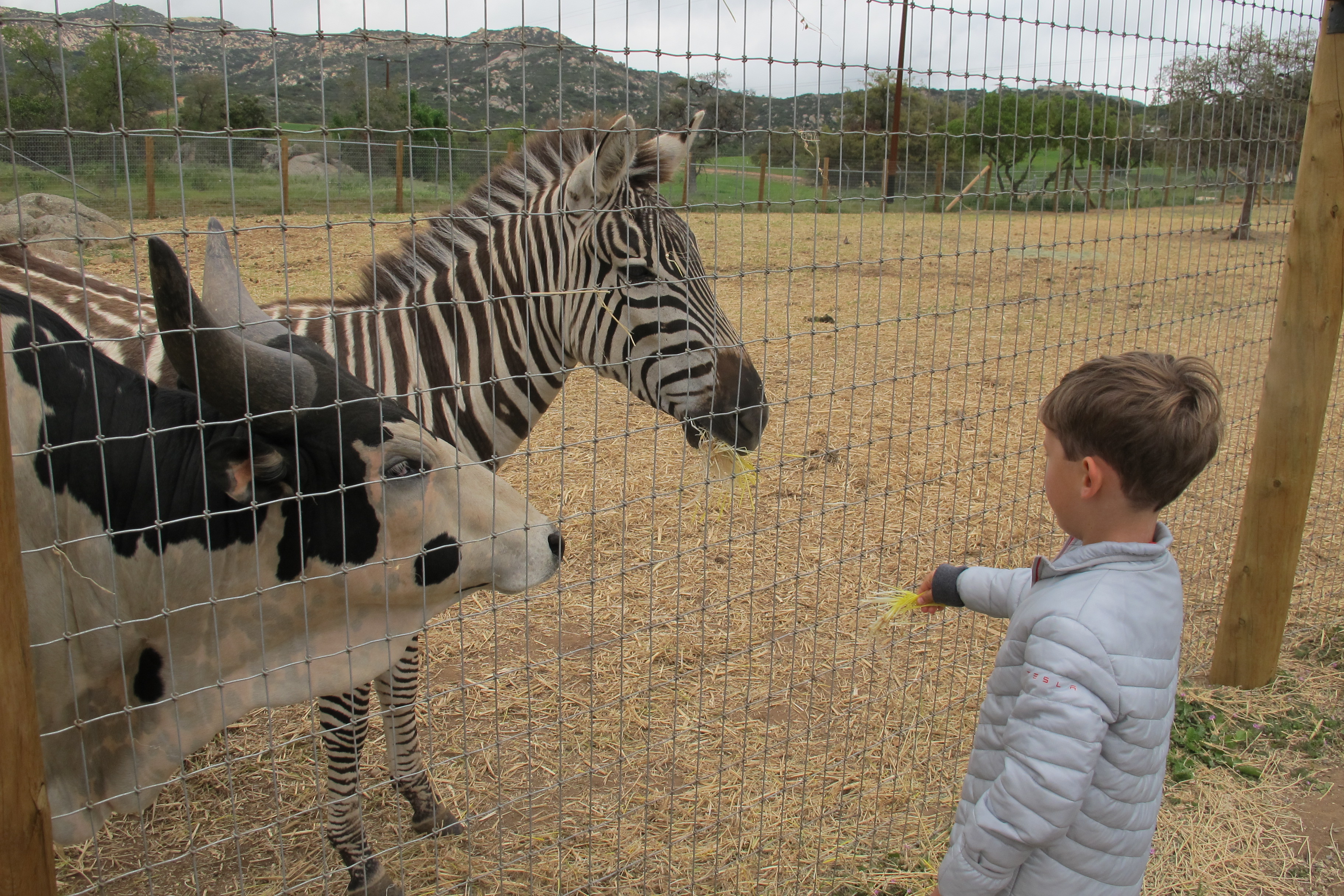 Planning Your Visit
The Children’s Nature Retreat is open 7 days a week. Call in advance (even on the same day) before your visit because the staff limits the retreat to a daily capacity of 100 guests to make sure each guest gets the most out of their experience. They also close the Retreat for school field trips, so you’ll want to be sure not to visit on one of those days.

Fundraiser Gala
Help the Children’s Nature Retreat serve children in need by attending their 2017 Disco Gala on May 19, 2017.

Parking is free and plentiful.

Photos by Beth Shea except where noted.

Have you visited the Children’s Nature Retreat? Tell is about it in the comments.