Jelly-filled donuts are so yesterday. The ‘it’ dessert of summer is almost too good to be true: a donut ice cream sandwich! That’s right, the latest culinary craze combines two classic, decadent treats into one: cool, refreshing ice cream + glazed, chewy donut = donut ice cream sandwich meeting euphoric little tastebuds. We’ve found the best spots around town to get your hands on this super sweet pairing. Read on for the scoop. 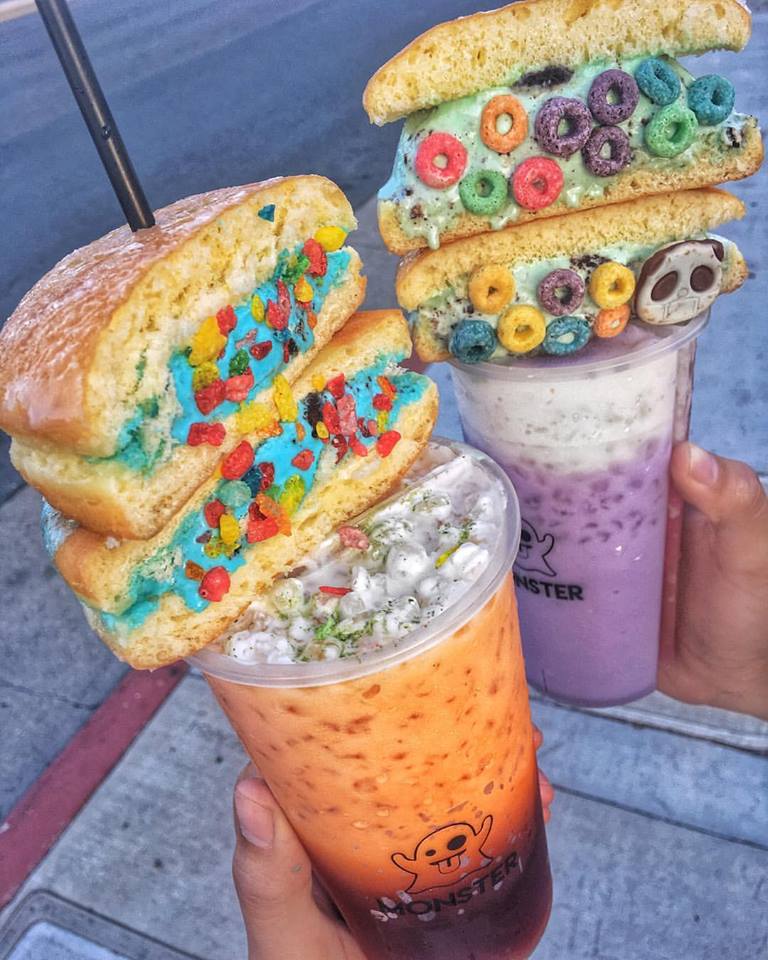 Cookie Monster
This East County ice cream shop prides itself on its premium handmade, small-batch ice cream that comes in eye-poppingly bright colors. The signature Monster Donut comes with two scoops of ice cream and can be topped with everything from cereal to mini chocolate chip cookies to mochi. Order yours with one of their specialty drinks (frappes, smoothies and milk teas) and your Monster Donut will be served right on the straw!

The Baked Bear
Started by two childhood friends from San Diego, this custom ice cream sandwich shop has locations all over the city. You can mix and match your “bread” here between cookies, brownies and donuts. Cookie on top and donut on bottom? Sure, why not! Original-recipe ice cream flavors include Bear Batter, Rocky Road and Salted Caramel Fudge. Once your sandwich is assembled, roll it around in toppings like mini M&Ms, sprinkles or Oreo crumbs. You can even heat it up so the outside is nice and warm and the inside is still cool and creamy. 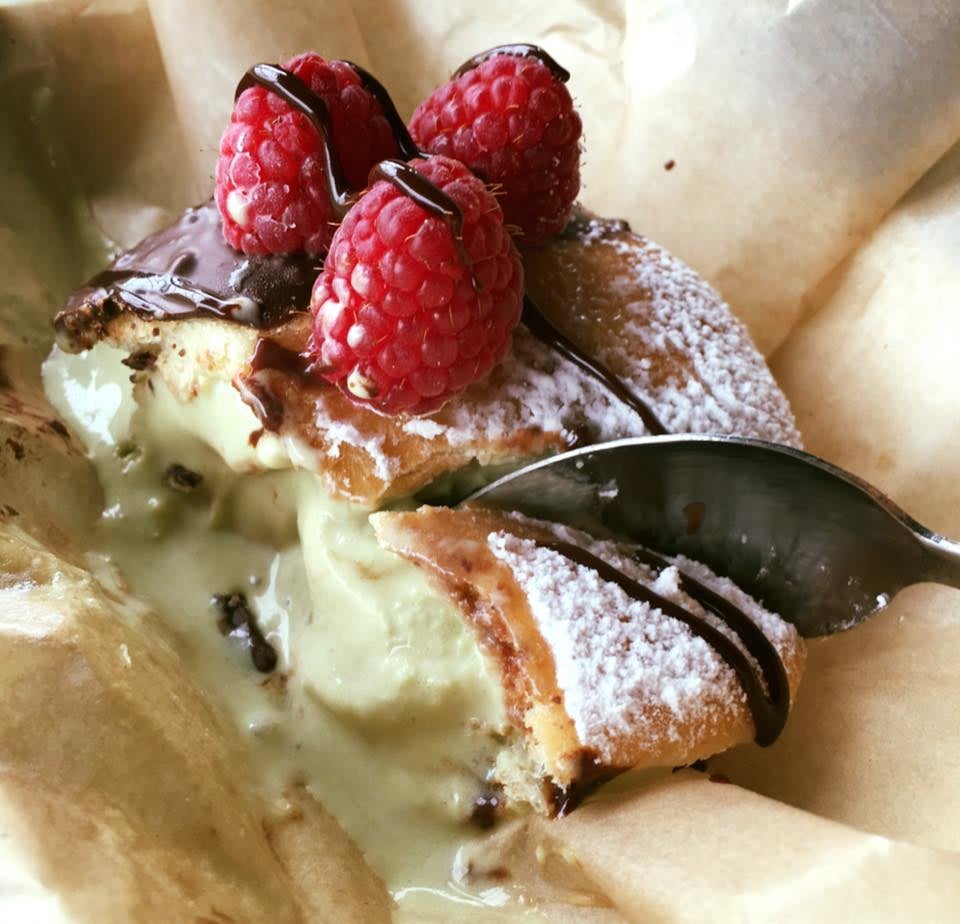 Coronado Spice & Tea
A spice and tea shop doesn’t sound like the most likely place for delicious ice cream and donuts, yet this North Park spot offers all of the above! Pick up some ancho chilies and grab a coffee and ice cream! There’s a rotating menu of local Mariposa ice creams and all can be sandwiched between a flaky glazed donut that can be rolled in an array of toppings and drizzled with chocolate or caramel sauce. Oh, did we mention there’s BBQ next door?

Donut Bar
Maybe sandwiches aren’t your thing. Maybe you’re thinking the best part of ice cream is the CONE. You can still indulge in the donut/ice cream fusion by visiting downtown hotspot Donut Bar who have magically transformed their delicious donut into a cone, which they will fill with a rotating menu of lush ice cream. Oh, and you might as well pick up a maple bacon donut while you’re there! 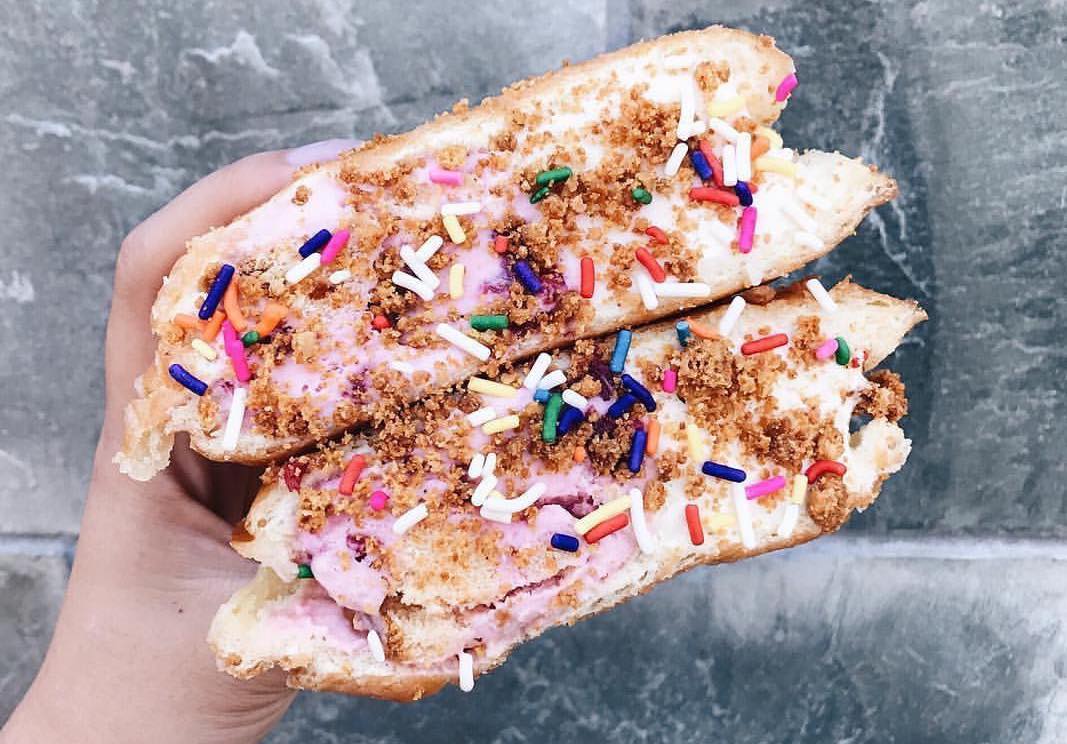 Afters Ice Cream
With locations throughout Southern California, the much-Instagrammed Afters has finally arrived in San Diego. And with it comes the milky bun, the donut’s Asian cousin. Fill yours with mouth-watering ice cream flavors like Vietnamese Coffee, Mint Monster or Acai Blueberry. Roll it in everything from sprinkles to cereal to mini peanut butter cups. Lines can be long, but good things come to those who wait!

Where’s your favorite spot for indulgent ice cream sandwiches? Tell us in the comments.