What do your kiddo’s fave Frozen 2 characters listen to on Spotify? Even though Anna, Elsa, Olaf and Kristoff are currently on their big screen Arendelle adventures, Spotify’s newly released annual Wrapped campaign now includes the Frozen gang’s stats for 2019.

Spotify Wrapped is your way of sharing what you’ve liked, listened to and streamed over the last decade. With the 2019 Wrapped or My Decade Wrapped share card, you can show friends and fam your results via Instagram, Twitter, Facebook or Snapchat. 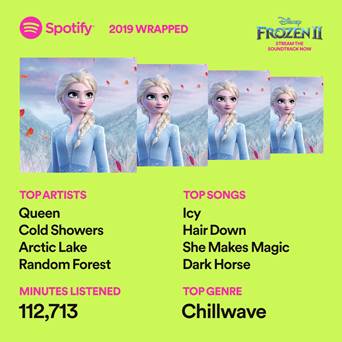 While plenty of non-fictional humans are using this end of the year/end of the decade feature, the Frozen gang is also sharing too. At least, what the experts at Spotify think the fictional favorites would be into.

So what’s on Anna and Elsa’s playlists? Anna’s top songs include “Hey, Soul Sister” and “How to Save a Life,” her podcast picks feature “The Sister Diary” and “The Fearless Chase” and her top genre is Scandipop. Elsa’s top artists include Queen and Arctic Lake while her top songs are “Icy,” “Hair Down,” “She Makes Magic” and “Dark Horse.”

Along with the cast of Frozen 2, you can also see the 2019 Spotify Wrapped cards for characters Netflix’s Stranger Things and HBO’s His Dark Materials here.

“Frozen 2” Merch Is Here & These Are the New Must-Haves