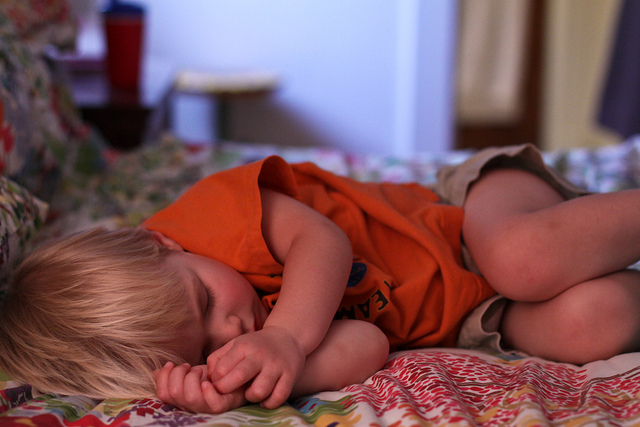 Naps don’t just provide kids (and parents!) with some good ol’ rest, it can also boost the memory in younger children. New research from the University of Arizona suggested that napping during the day has helped preschool-aged kids retain information.

The research team evaluated 39 three-year-olds and found that those who napped after learning new verbs had a better understanding of the words when tested 24 hours later. The three-year-olds were divided into two groups: habitual nappers (those who napped four or more times a week) and non-habitual nappers (three or fewer naps a week). Both groups were taught imaginary verbs– “blicking” and “rooping” — and showed them a video in which actors demonstrated with each ‘verb.’

The following day, the researchers quizzed the children on “blicking” and “rooping,” and noticed something interesting. Children who had napped within about an hour of learning the verbs performed better than those who stayed awake for at least five hours after learning, regardless of whether they were habitual or non-habitual nappers.

“Verbs are interesting because we know they are very challenging for children to learn and to retain over time,” says lead study author and UA alumna Michelle Sandoval. “Individual objects have clear boundaries, and children learn about those very early in development — before they hit their first birthday, they know a lot about objects. Verbs aren’t as neatly packaged. Besides a physically perceptible action, a verb contains information about the number of people involved and can contain information about when the action took place.”

Researchers believe this memory retention is because of slow-wave sleep.

“There’s a lot of evidence that different phases of sleep contribute to memory consolidation, and one of the really important phases is slow-wave sleep, which is one of the deepest forms of sleep,” said study co-author Rebecca Gómez, UA associate professor of psychology, cognitive science, and second language acquisition and teaching. “What’s really important about this phase is that essentially what the brain is doing is replaying memories during sleep, so those brain rhythms that occur during slow-wave sleep and other phases of non-REM sleep are actually reactivating those patterns — those memories — and replaying them and strengthening them.”

Rebecca encourages parents to implement a nap routine in their kid’s schedule.

Will you be adding more naps into your calendar? Let us know in the comments below!