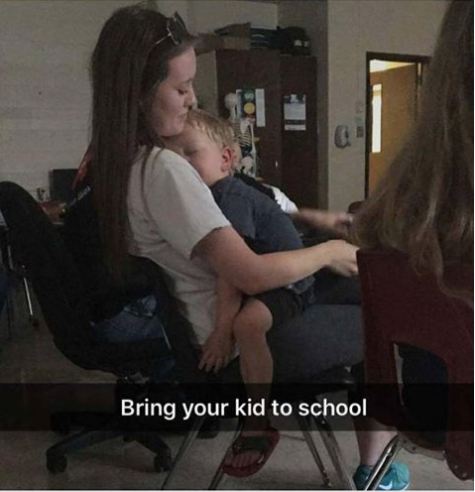 A high school student helped out her parents, big-time — and earned some major big sister points — when she agreed to pick up her three-year-old brother from school one day after her family had to attend a family emergency. What her parents probably didn’t realize was that the teen wasn’t going to take her little brother straight home; instead, she took him back to school with her so she could finish out the last class of the day.

“We had a family emergency type situation today that required our teenager to leave school early and pick up her little brother from his school,” reads the post, which was posted to the Facebook page Love What Matters. “I thought she took him home until I saw her snapchat. Instead of missing class she actually took her three year old brother back to high school with her and let him sleep on her while she finished her last class of the day.”

The mom told Babble that the teen is studying to be a nurse and didn’t want to miss her clinical rotations class.

“I’m not sure on the legalities here or what kind of rules were broken but I also just don’t care. My sweet teenager helped her family out and returned to her other responsibility while snuggling her baby brother.”

The mom goes on to wonder whether she should feel proud of herself for raising such a sweet daughter — or feel guilty for raising a daughter who would so blatantly stride into high school with a toddler in tow. (FYI… we think she should be totally proud!)

“I’m either the worst mom in the world or totally nailing it,” she says, to end her post. “Please don’t tell me which one, let me live in ignorant bliss while I stare at this picture. Life is short. These are the moments that make it so incredibly sweet.”

Do you think this was the right thing for the teen to do? Tell us your thoughts in the comments below.