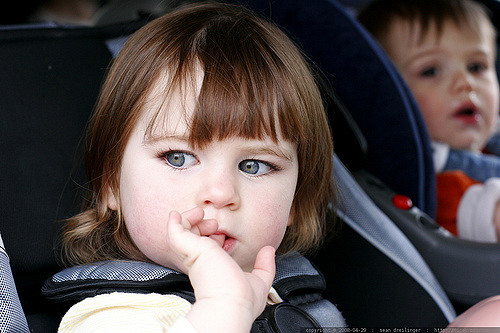 Traveling with a toddler should never be taken lightly. It’s hard enough to get my family in gear for a simple trip to the grocery store, let alone a multi-state trek over the holidays so distant relatives can coo over the baby and bury you with enough loud, blinking, migraine-inducing gifts that your car looks like something out of The Grapes of Wrath for your return trip.

No matter much you plan or how far in advance you start packing, something is bound to happen to throw a wrench in your road trip plans.

Usually that something calls you mommy and wears a diaper, but it could also be the weather, traffic, or any number of things that set your teeth on edge and make you vow to sell your car first thing when you get home and live your life as a blissful, bipedal Luddite until the day you die.

I speak from sad experience.

Come along for a recap of the worst car trip in (my) history.

Packing everything you need for a toddler on a road trip is no laughing matter. If you’ve never done it before, you basically need twice as much clothing and triple the diapers you’d normally use, plus a full toy chest and a cooler full of snacks. The thing about these fickle monsters is that you never know what they’re going to feel like eating, doing or wearing, so the path of least resistance is simply to bring it all along to avoid a Christmas Eve meltdown in front of your not-at-all-judgmental mother-in-law.

Add to that list a pile of gifts, a suitcase for yourself and two bleary-eyed, less-than-thrilled adults who’d really rather just Netflix and chill pass out after half a glass of wine, and you’ve got to pack at least a few days ahead to cram it all in.

Oh, and did I mention the Christmas miracle? Snow was on the way.

That meant leaving a day earlier than planned.

And that meant rushing so much that we forgot diapers.

Potty Training on the Road

Of course, we didn’t know we had forgotten the diapers until several hours into our white-knuckled journey to beat a blizzard over the river and through the woods. We thought we had it all under control, with my not-quite 2-year-old safely bundled and tucked into her car seat in the back.

No, it wasn’t until we noticed that the sing-song babble from the back seat was more insistently chanting “Poo-poo! Poo-poo!” that we got the message.

While my husband pulled off at the exit, I reached around for the diaper bag, which, of course, was nowhere to be found. In fact, we wouldn’t see it again for another three weeks, as it was buried under three feet of snow in our driveway while we were gone.

This left us with no choice other than to brightly talk up the joys of using a big girl potty. At a restaurant! Won’t that be fun?

It might have been an exciting first potty excursion if there had been anything other than The World’s Filthiest Fast Food Restaurant around to pull into. As I whisked my daughter into the ladies room, no amount of Mommy’s manic sing-song voice could cover over what we saw.

My daughter’s eyes got wide as she took in what looked to be a set designer’s idea of “dirty bathroom” —— gray grime streaked on every wall, wadded toilet paper on the sticky tile floor, a locked-and-loaded mousetrap in the corner.

Who could argue? The place was terrifying.

We marched back to the car, where I let fly a string of profanities about the state of that restroom.

And, as toddlers have an ear for four-letter words, I was overheard and promptly quoted from the back seat.

Never let it be said my daughter isn’t bright. She used that word perfectly, as she had, indeed, found a place to poo-poo.

My husband somehow MacGyvered together a car seat cover out of a stray garbage bag while I sacrificed my least favorite t-shirt of his to use as a new diaper. A few spritzes of perfume later, and we were on our way with our daughter merrily chanting her favorite new four-letter word as we went.

The Moral of the Story

Though lessons abound here about making a list and checking it twice, what we learned from this hellacious experience is that, no matter how awful it is at the time, you will laugh about it someday.

We weren’t laughing until we got back home and shared the experience with our also-in-the-trenches friends with toddlers. The rest of that holiday trip nearly killed us, but we did ultimately see the humor.

And we never drive by that exit without chanting the S-word until we dissolve into hysterics.