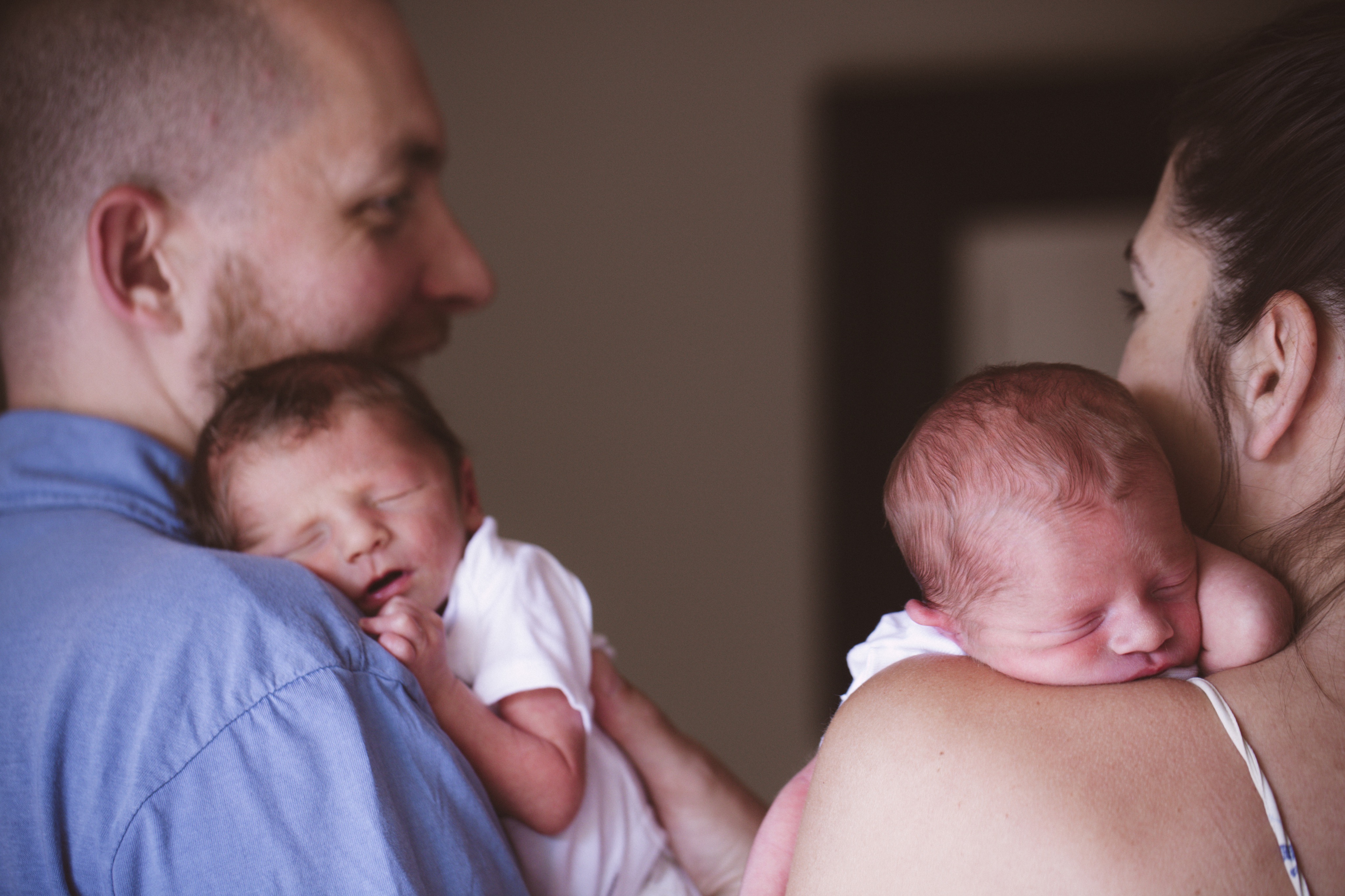 When you are pregnant people are always willing to give you any and every bit of advice they have in their arsenal.  Some helpful, most not, especially when you are expecting twins and the advice is coming from someone who either does not have twins or doesn’t even have kids.

Even still, you listen and you try to remember and you prep as much as you can for your impending arrivals.  But no matter what people have told you and how much you have prepared, read, taken classes, it really doesn’t hit home until the babies arrive.  For me there were a few things that I was totally unprepared for when I became a parent to twins.

1. Bone Deep Exhaustion.  This is something every soon to be mother hears about, tries to prepare for and thinks they understand what will happen once the babies arrive.  But no.  You have no f***ing idea how exhausted you will feel deep into your soul.  I remember visiting home one year and seeing my brother and sister-in-law, about 6 months after giving birth and the color was gone from their faces.  They had no peachy skin-tone, but more of a grayish hue to their face.  It was an eye-opening experience. My nephew is beyond amazing, but sleeping wasn’t his strong suit.  So I went into parenting with the vision of my brother’s gray face but still no real understanding until I gave birth, and ceased to have a good night sleep again.

As soon as morning comes, whatever time they decide that is, they hit the ground running, even when they are too young to move on their own.  Then when they begin to crawl, walk, run, so are you.  The amount of energy I put into the hours between rise and sleep is, in my mind, equivalent to running a marathon, everyday, but without the lovely scenery to zone out on.  It is physically draining as well as mentally.  Every day I am just trying to figure it this parenting thing out and wondering am I doing it right or mucking it up for them?

My guys were pretty good sleepers but the intense feeding schedule of the first few months, followed by, teething, milestones, sickness, transitions, toddler beds, dreams, being scared, the wind, the rain, the whatever the reason du jour is, I haven’t slept through a night since I was 7 months pregnant.  Even when they don’t wake up in the night or I spend a night away from them I still wake up about 2-3 times a night now.  I have no idea why, and it makes me sad.  I wonder if I will ever sleep again?  I miss it.

2. Toilet Duty.  Every day as I clean potty seat after potty seat I think “where did it all go wrong?”  The intimate relationship I have with feces is one that I never expected.

Twins equal a zillion diapers.  You could take a lovely vacation with the amount of money you spend on diapers when you have twins.  To off-set that cost we also used cloth diapers.  We got a bidet to attach to the toilet to clean the cloth diapers.  So for the first two years I was wiping asses and spraying diapers and cleaning the occasional spillage.  After that, gone were the diapers and hello potty chairs, which often calls for a more hands on approach.

I’m still wiping asses, plus the revolving door of seats that needs cleaning after each use.  This is a viscous aspect of parenting that doesn’t get talked about and should.  I remember a friend of mine told me about the day that her baby needed changing and toddler had an accident so she used the car wash bathroom to try to clean everyone up, inevitably getting things all over herself as she tried to maneuver in the small, public space.  “Motherhood is degrading” she said and she couldn’t have spoken truer words.

3. The Onslaught of Bacteria.  Speaking of degrading, they have sneezed in my mouth, on more than one occasion.  No one knew how or at this point cares to learn to cover their mouth and of course when they are sick they are attached to me.  It is inevitable but still, when it happens, when someone actually sneezes in your mouth or eyes, no matter how much you love them, it is foul.  There is a reason moms become way sicker than their kids when illness passes through the house.  Her body becomes the end zone for every bacteria spewing from the children and her bed their place of rest and recuperation.

One time while on Face Time with my mom, I thought one of the boys came behind me and hugged me until my mother said, “did you know he just wiped his mouth on your back?”  I would have walked out of the house with crap on my shirt if she hadn’t seen that.

In the past three years think I have had pee on my hands more than I haven’t.  I have drunk from my drink, which unbeknownst to me, they have also drank from and spit in, because spitting out liquid is fun.  I have had snot wiped on any part of my body that is closest to them at the time.   I have been pooped on, peed on, puked on, coughed on and sneezed on, almost on a daily basis.

At least no one peed on my face. That happened to my husband when he made the fatal error of leaning over to kiss one of the boys when I was changing them.  Right in the forehead he got it.  Still makes me laugh.

4. Annoyance with Strangers– This really begins with pregnancy.  Every woman who has carried a baby knows that uncomfortable feeling of some strange person’s hands touching our pregnant belly.  Then when they find out you are having twins, you either have to listen to them tell you how horrible and hard it is going to be or some story about their neighbor down the street whose cousin had twins.  Everyone who has zero experience with twins has something informative to tell you about twins.  It’s great.

Twins make you a mini celebrity when you go anywhere.  People love twins.  After they are born, strangers continue with their unsolicited advice, continue asking inappropriate questions about how you got pregnant with twins and are you breastfeeding them.  And now instead of touching you, they try to touch the babies.  Hands off!  I don’t want you touching them and neither do they, indicated by their crying as you are reaching for them. I would literally be backing my stroller away and yet they would still walk forward to grab the babies not getting the hint.

My twins are fraternal and to me look nothing alike.  But as I look back on baby pictures I can see how people mistook them for identical.  So in that case, I am sorry if I sounded a bit rude when I said no, they are not identical for the millionth time, (this really should be my husband apologizing).  But what I cannot forgive is the ridiculous exclamations like “do you know one has curly hair?” or “were they born on the same day?”

I also cannot get past the number of people who have stood there watching while I try to hold a door and get my stroller through it, or made us walk outside of the cross walk because they won’t move aside or literally stepped over us or pushed past as I try to get everyone organized and out a door.

5. The Kindness of Strangers – The amount of people who have helped me over the past three years has been so incredible. We live during a time when everyone, including myself, is in a rush to get everywhere.  For someone to literally stop what they are in the middle of doing to lend a hand, is at times overwhelming.  Being a new mom, more importantly, a new mom to twins, constantly has you in a state of panic when you leave the house.  It can be hard to not feel you are putting people out because your stroller takes up so much space or it takes you 20x the amount of time to get from point A to point B.  When a stranger shows patience and understanding, it can make a mom’s day.

So to all those strangers walking down the street who stopped to let me by, let me go before them in line, helped me get on and off planes, opened doors for me, helped pick up the contents of my bag that have spilled everywhere, given an encouraging word, helped me in a baby class, told me I am doing a great job, I want to thank you from the bottom of my exhausted, bursting heart.  You will never know how many of you saved me from a meltdown. I will always try to pay it forward.

I am an East Coast girl living in sunny California.  My life took a 180 once I gave birth to twins. I have spent the last couple of years trying to navigate the waters of parent to twins without any lifevest.