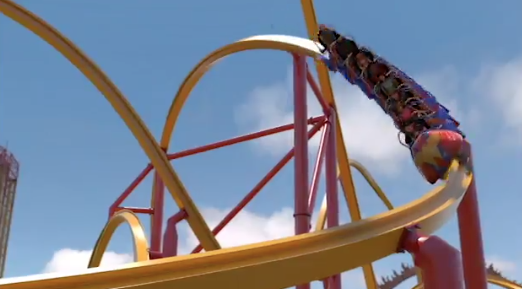 2017 is clearly the year of Wonder Woman and now there’s a new wonder-filled adventure for fans to look forward to. Six Flags has just unveiled plans for a brand new Wonder Woman-themed rollercoaster, and just like the movie it’s breaking new grounds.

As USA Today reports, Six Flags has announced the new Wonder Woman Golden Lasso Coaster will be opening at the Fiesta Texas park in San Antonio next spring. What makes this new ride so remarkable is that it will be the very first single rail IBox track coaster. Unlike the typical two-rail tracks, and previous iterations of single tracks, this new coaster will provide an ultra smooth ride that will make you feel like you’re gliding through the air. In addition to the single track, the train itself will also be narrower and feature single seats, so there will be no one riding on either side of you.

Jeff Seibert, president of Six Flags Fiesta Texas, told USA Today that the entire coaster structure will be visually stunning. As the narrow track means less steel beams and supports that are typically needed to hold it structurally, it will be a very close resemblance to Wonder Woman’s golden weapon looping in the air. The ride will also feature a 100-foot drop and a top speed of 52 miles per hour.

Would your little thrill-seekers like to ride on this new coaster? Tell us in the comments below.