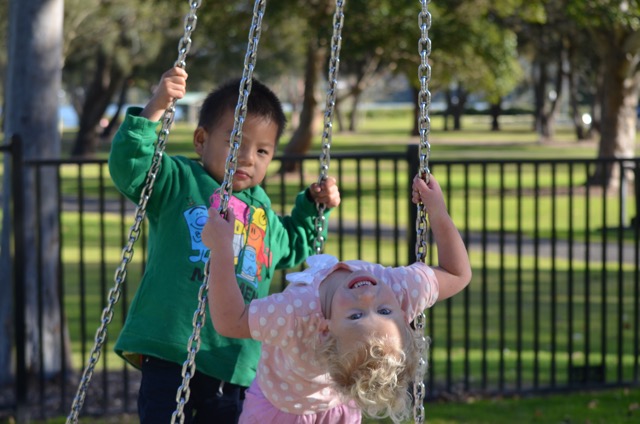 Nearly everyone has that favorite childhood memory where they played on the playground with their siblings or friends. Maybe you looked forward to racing to the top of the slide or climbing across the monkey bars before anyone else. And maybe now you’re that parent on the bench, watching your kiddo play.

But, what happens if your kid gets bored? You’ve already driven all the way to the park, so make sure you know how to have fun while you’re there.

It’s always a smart idea to go to the playground or park with some backup ideas in mind for how to entertain your kids—especially if they’re more used to playing with technology instead of the outdoors. There are lots of ways to have fun at the playground that doesn’t involve just the swings or the slide.

1. Hula Hoop Tag
Bring your trusty hula hoops from home for this game. Get at least eight to ten kids together in a circle, and have them hold hands. The two hula hoops should be linked into the circle at two different points, resting on conjoined hands. When you say “go,” the kids try to get through the hula hoop and pass it on to the next person without breaking hands—and without letting one hula hoop catch up with the other!

2. Mannequin Tag
This is another great game, and it can even be done with just three kids. The rules are essentially the same as regular tag, but in this game, whenever “it” tags someone, that kid has to freeze. Players can freeze in a running pose or a funny one, but if they move before being tagged by another runner, the game is over.

3. Chalk Wordgames
With a cheap bucket of chalk, you can give your little artist access to the kind of playtime that develops fine motor skills. This will teach her how to not only use her own skills better but also how to engage in the world around her. When the world is your coloring book and you draw outside the lines, the possibilities are limitless.

4. Jump Rope
A jump rope provides great exercise for kids, and there’s plenty of ways to play with one. Before you leave the house, teach your kids a jump-rope rhyme and how to double-dutch, and they’ll be entertained for hours. Be sure to pack band-aids, just in case. Tripping can result in knee and elbow scratches, so better safe than sorry!

5. Red Light, Green Light
Sometimes the classics are truly the best. One person is the traffic light, and the group of kids across the sand are the cars. If the “traffic light” yells “red” or “green,” the kids stop or go. The point is to tag the traffic light and switch spots. Play this game in the shade and you’re golden.

6. Marco Polo
Does your park also have a community pool attached? Let the kids play Marco Polo for a bit in the shallow end. One person has their eyes closed and yells, “Marco!” The rest respond, “Polo,” while trying to avoid being tagged by “Marco.” No one will be able to tell you why that’s what the game is called, but it sure is fun.

7. Telephone
Have the players sit in a circle and whisper a phrase into one of the kid’s ears. That person will then whisper it to the person next to them until it comes back around to the person next to the kid who started it all. The last person must announce what they heard, which is hardly ever right. Try to beat the odds on this one while you’re sitting in the shade at the park.

8. Four Square
If you still have that chalk around, draw a four-square court on the pavement and hand a bouncy ball to one of your players (There must be at least four.). Players must hit the ball to each other by bouncing it into someone else’s square. If the ball lands outside the court, the person who missed it is out.

9. Bean Bag Toss
This game will require you to purchase two boards and at least eight bean bags. The point is to land the bean bags on the board or through the hole at the top of the board to score points. There are different kinds of boards too, some even with designs that look like paint splatter point sections. Pick out the one that’ll be the most fun for your child, set it up at a distance, and have fun!

10. Hopscotch
Hopscotch is another classic that’ll probably be around for the rest of time. There are so many ways to play the game that there’s always going to be something new to try. Grab chalk and a rock, and your kids will be hopping their way through the afternoon.

11. Playground Challenge
This will work with one kid or multiple because playground challenges are customizable. In your head, map out a course for your child to run through. Say, across the jungle gym, down the slide, ten pumps on the swing, and three summersaults in the grass over the finish line. Set a timer, and any kid will love sprinting through their challenge course.

Playing at the playground doesn’t always have to mean using the equipment that’s provided in the traditional ways. Making up games will give you and your child a new reason to go to the park, and, because you’ll be involved, you’ll both have ten times more fun. Remember to stay hydrated while you hang out!