If loving Ali Wong‘s third original comedy special Don Wong on Netflix is wong, we don’t want to be right.

With her signature fearlessness, the comedian, writer and actress reveals her wildest fantasies, the challenges of monogamy, and how she really feels about single people, per the official release—and it debuted on Valentine’s Day, naturally.

Wong kicks off her set admitting that she’s “very jealous and bitter” that men with any success in comedy get to date models and actresses, while women—at the top of their game—might find themselves dating a 2-star Yelp magician. “Because when you are a woman with money, power, respect—your romantic options do not expand. They decline.”

She continues to illustrate—in typical raunchy and hysterical color—how gender, power and lies go hand-in-hand. “The lies will set you free.”

“Young men want a woman that’s chill,” she quips. “I have never ever wanted to date a man that was chill, because chill don’t pay the bills.”

She relates the story of a nephew who’s debating breaking up with a woman who’s a “boss at work” so she comes home and thinks she can boss him around. “Aunti Ali” reminds him that “that’s gonna happen.” And the schooling continues. “All women are very good at being extremely unpleasant and holding your happiness and self esteem hostage until we get what we f’ing deserve…That is a superpower that we evolved to compensate for our earning potential. You can’t tell any woman what to do, so you might as well pick the one that can give you health insurance, ok?” 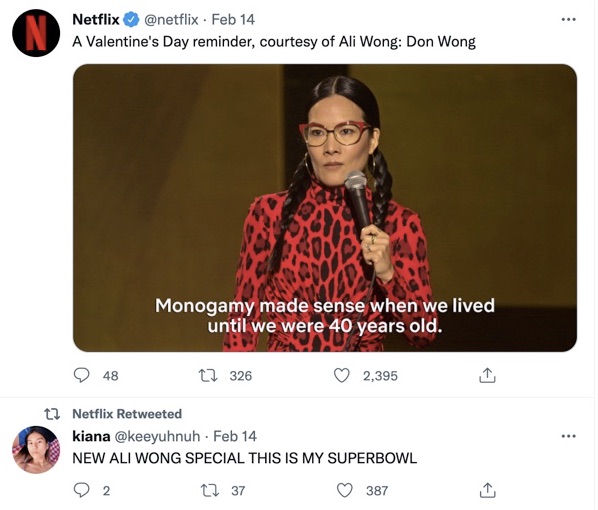 The best moments in Ali Wong’s new Netflix special Don Wong are the ones where her jokes get a little uncomfortable, but they’re so honest and delivered in a lighthearted way that you can’t help but laugh. And while she takes you on a weird journey down fantasy lane and philanderer’s alley, Don Wong ends with reassurance that, in fact, Wong does love her husband, and that he’s a great, supportive guy. And based on the hour before that revelation, you’ll be relieved.

25 Banned Books That Every Kid Needs to Read

The Best Indie Bookstores for Kids in Every State (& D.C.!)