You’re late, you’re late, to a very important date. We’re talking about your invitation to an utterly mad tea party in celebration of Coco’s third birthday. Since Coco loves to dress up like Alice from Alice in Wonderland, Coco’s mom thought it would be fun to plan a party around her daughter’s favorite storybook character. Well Alice, eat your heart out, because Coco’s Mad Hatter birthday party really takes the cake (with tea, of course). Luckily for Coco, she’s not the only one in her family obsessed with Alice and her whimsical adventure down the rabbit hole–her grandmother and her godfather are big Alice fans and were hugely instrumental in making this fantastic party come together. We have to tip our 10/6 size hat to superstar photographer Kay Bradford who captured all these magical moments of Coco’s Alice party. Take a look at some of the great shots and read on to get the deets on how this celebration came together. 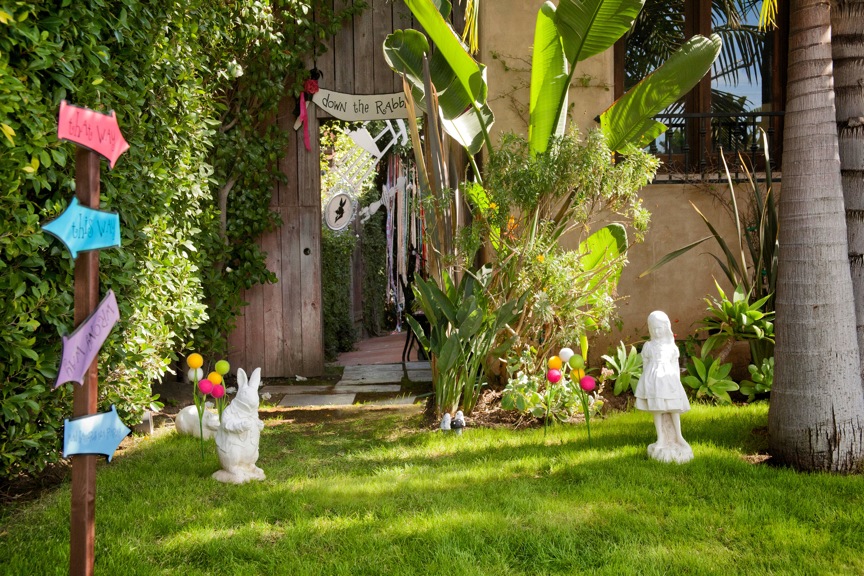 Coco’s third birthday party was hosted at her godfather’s backyard. In order to make guests feel like they were about to step into a magical English garden, the entrance to the party was quizically marked with signs pointing “This Way” and “That Way” purchased on Etsy. The Alice and White Rabbit garden statues came right from Coco’s grandmother, who collects Alice memorabilia. 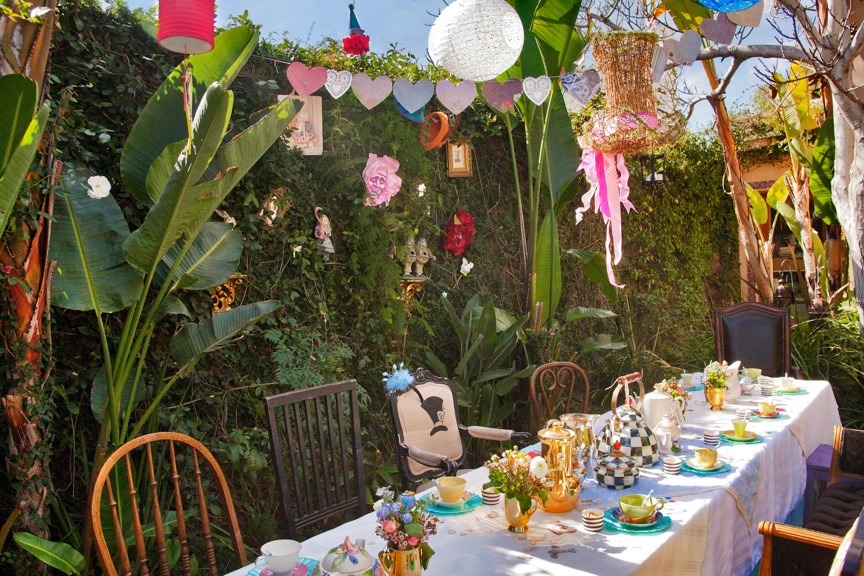 Ok, we’re truly envious of this spread that makes all of our stuffed animal tea parties we threw as kids look totally amateur. Coco’s talented godfather, John, is an artist who was largely responsible for many of the decorations at the party, including the hand-woven Mad Hatter’s hat suspended above the table (made from actual tree branches!) Check out his Etsy shop to see more of his amazing work.

The mix-matched chairs were an especially nice touch for the tea party, many of which came from thrift shops and the goodwill. 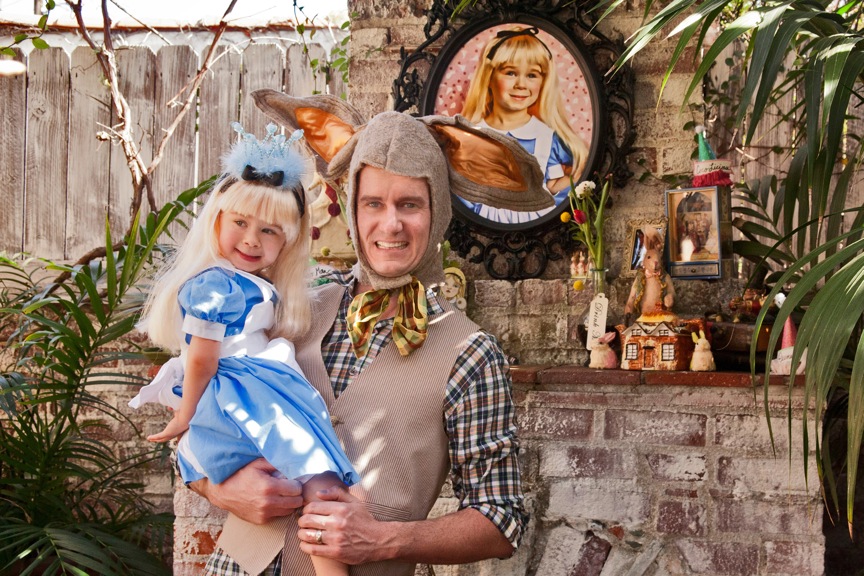 That’s the birthday girl all dolled up in her Alice costume. To really give the feel that guests had stepped into the home of the White Rabbit himself, Coco’s mom had photographer Kay add an “oil painting” filter over a picture of Coco in her dress. All of the hearth decorations were courtesy of Coco’s Alice-obsessed grandmother. Coco’s mom claims she literally went shopping at her mother’s house to find all of the little knick knacks for the party. 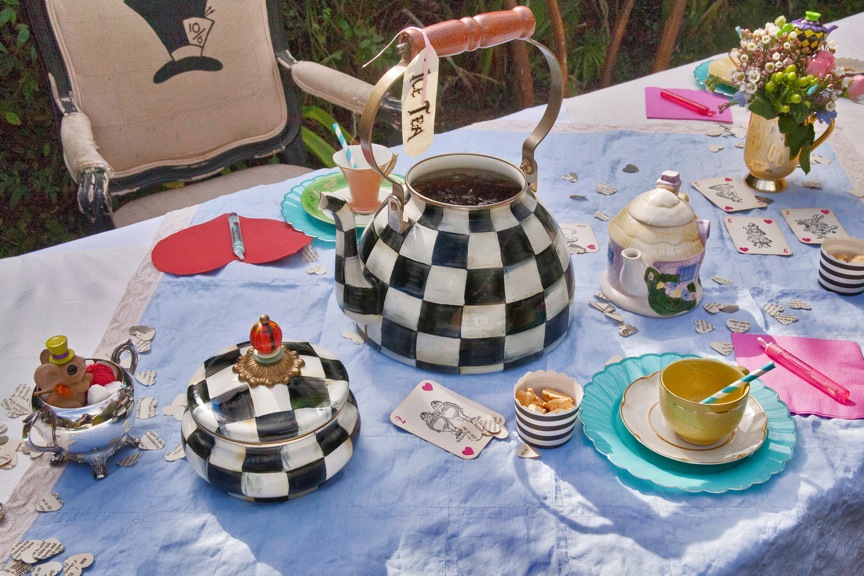 The tables were literally covered with Alice-themed teacups, playing cards, and teapots, many of which came from various thrift shops. 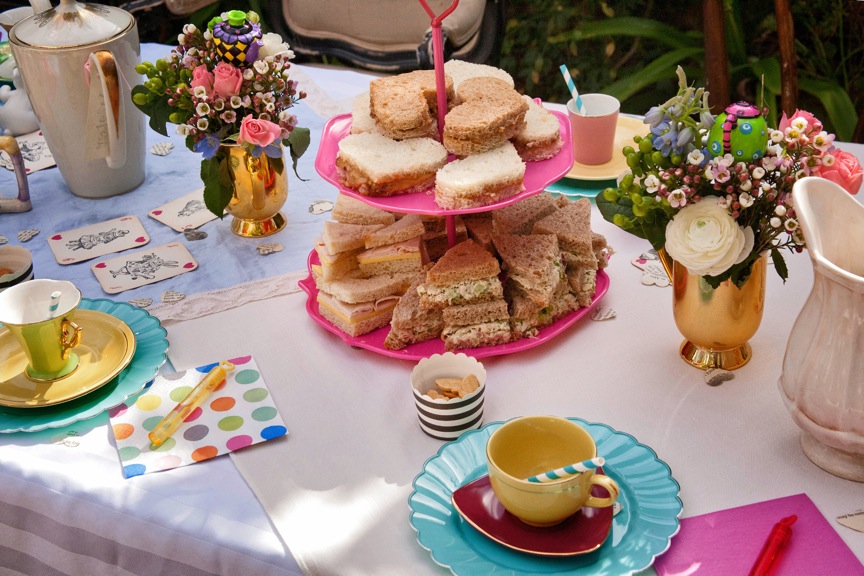 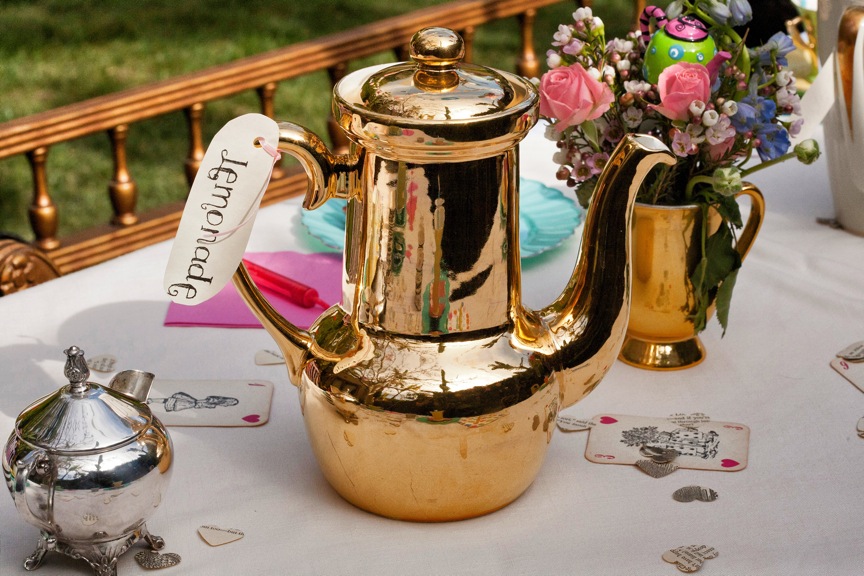 Even the room for the parents was fully decked out, complete with oversized playing cards hanging overhead and a colorful set of tea cups and plates. 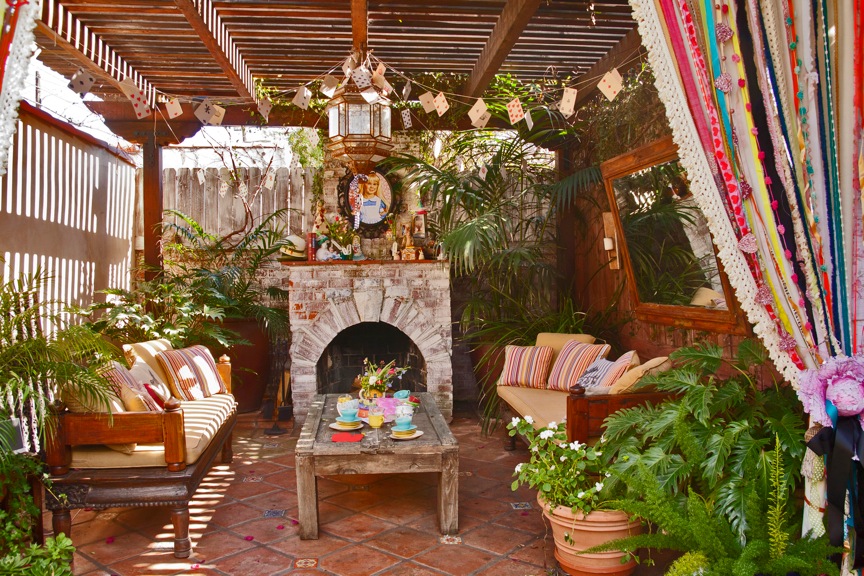 The Mad Hatter hat station was great for letting guests dress up as their favorite characters from the story and snag a photo or two as a reminder of all the fun they had at Coco’s party. 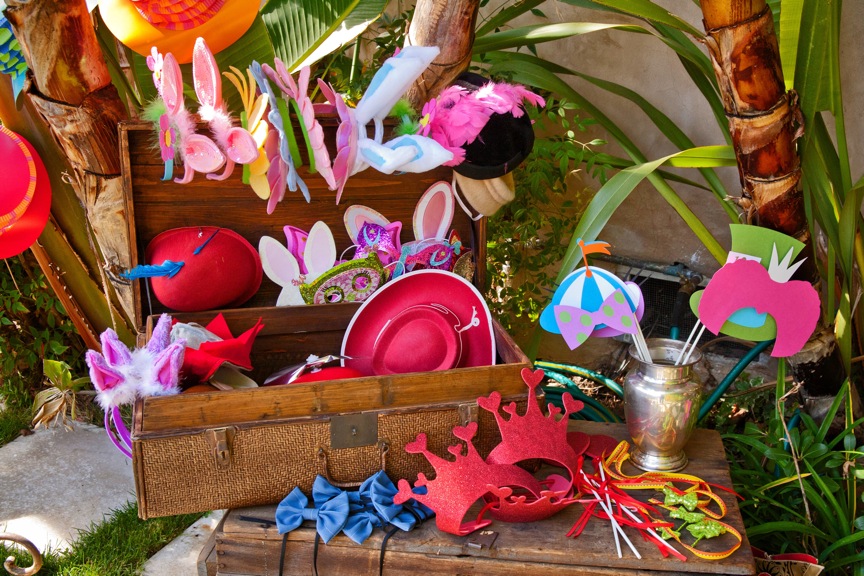 The Queen of Hearts! By the looks on Coco’s face, she was more than excited to see her the Queen take time out of her hedgehog croquet game to come wish Coco a Happy Birthday. 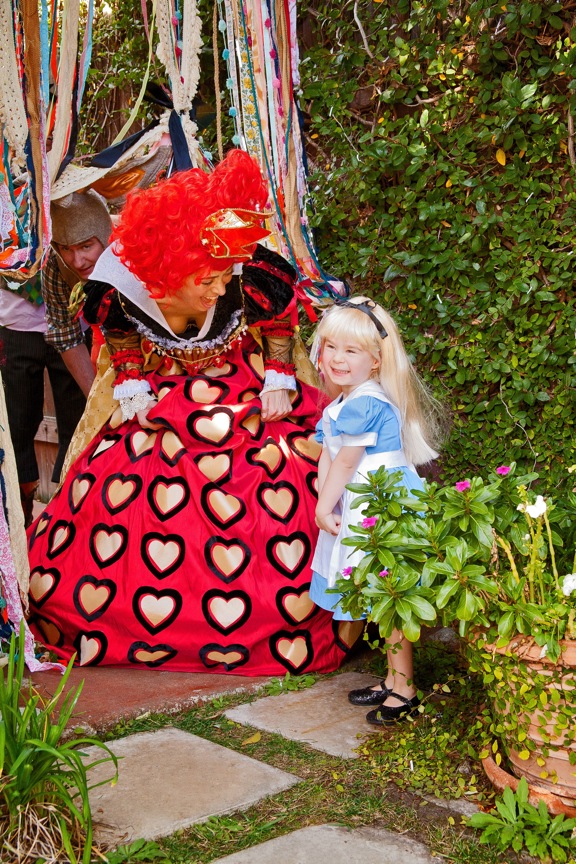 No self-respecting tea party is complete without a few party games. Coco’s godfather hand-painted the pin-the-smile-on-the-Cheshire-Cat game on brown butcher paper and sewed a few stuffed hedgehog toys into a ball so Coco’s guests could play Hot Hedgehog. The winner even got to take their own hedgehog home with them. After the games, everyone joined in on an impromptu dance party to the Alice in Wonderland soundtrack. To top off the festivities, everyone got to take a swing at the piñata… 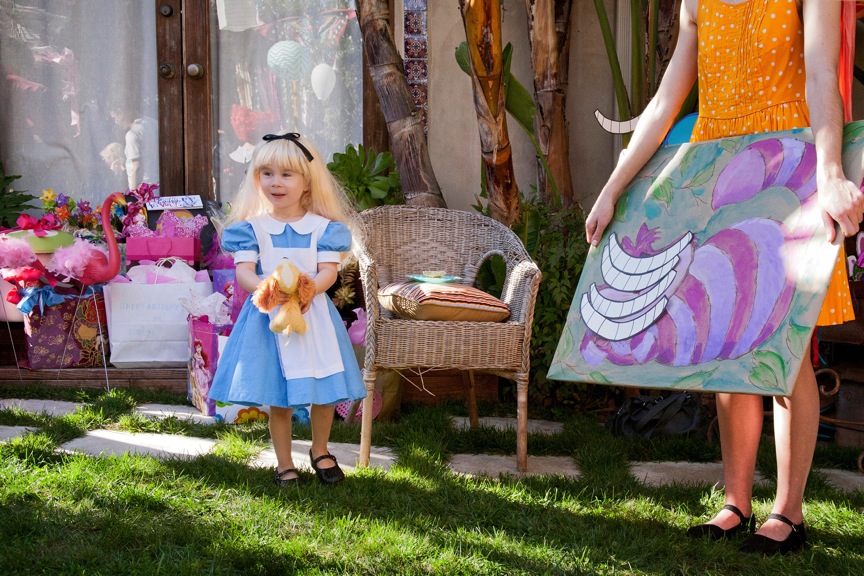 …shaped like the Cheshire Cat of course! The piñata was courtesy of Dale Piñatas. This little guy sat perched in the tree for the party, overseeing all the guests before it was his turn to come down and join in on the fun. 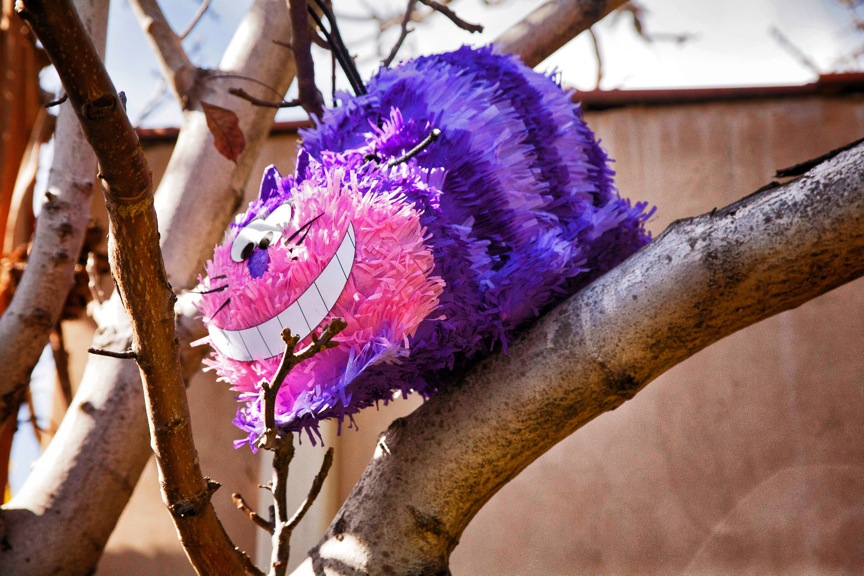 With decorations in just about every corner of the garden, no detail of the party was left unnoticed, even the flower beds were decorated with colorful pinwheels and decorated mushrooms. 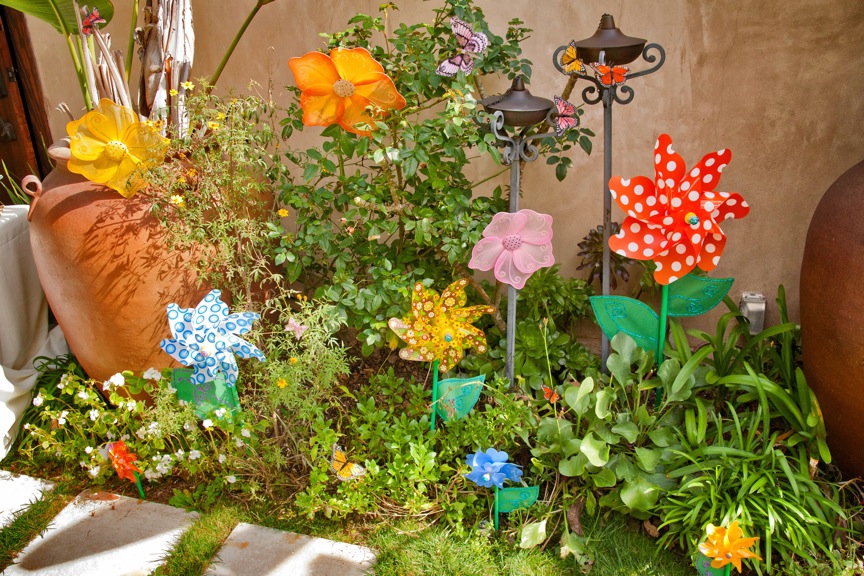 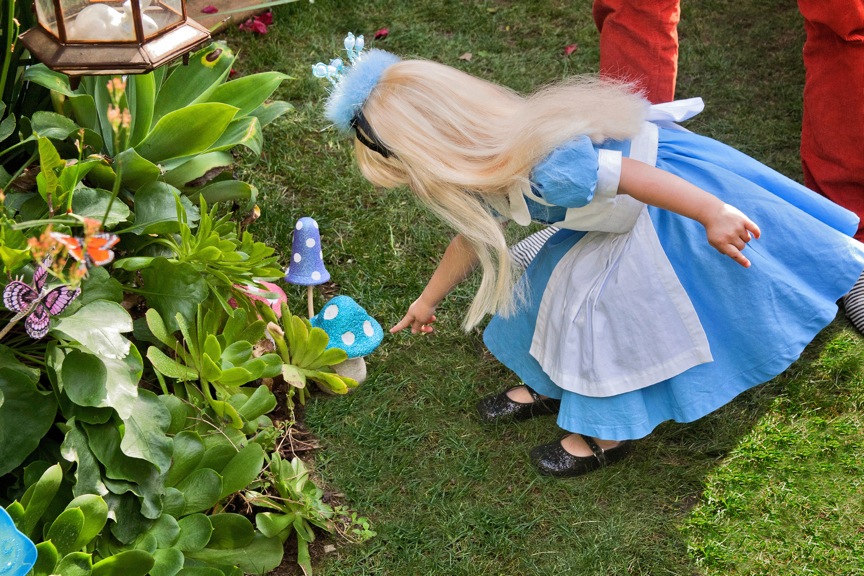 We can’t even begin to imagine how Coco’s next birthday party will turn out–this one is pretty hard to top. Coco’s mother says she’s incredibly grateful for all the help she received from her talented friends and family in making this fantastical party a reality. We’re exhausted just looking at the photos.

What is your favorite part of Coco’s whimsical birthday party? Share it with us in a comment below.

A very special thanks to Holly, Coco’s mom for all of her help in bringing this piece together.