Atlanta is known for constantly reinventing itself. We rise up from the ashes. New shopping centers, restaurants and attractions pop up every day. However, a few have stood the test of time. We’re talking 50 years or more. That’s oooold in this town. Taking the kids to some of these historic parks, attractions and eateries is not only fun, but will help give your little peanuts a sense of patriotism and the past. Pack the snacks and get ready for some old-fashioned sightseeing right here at home. 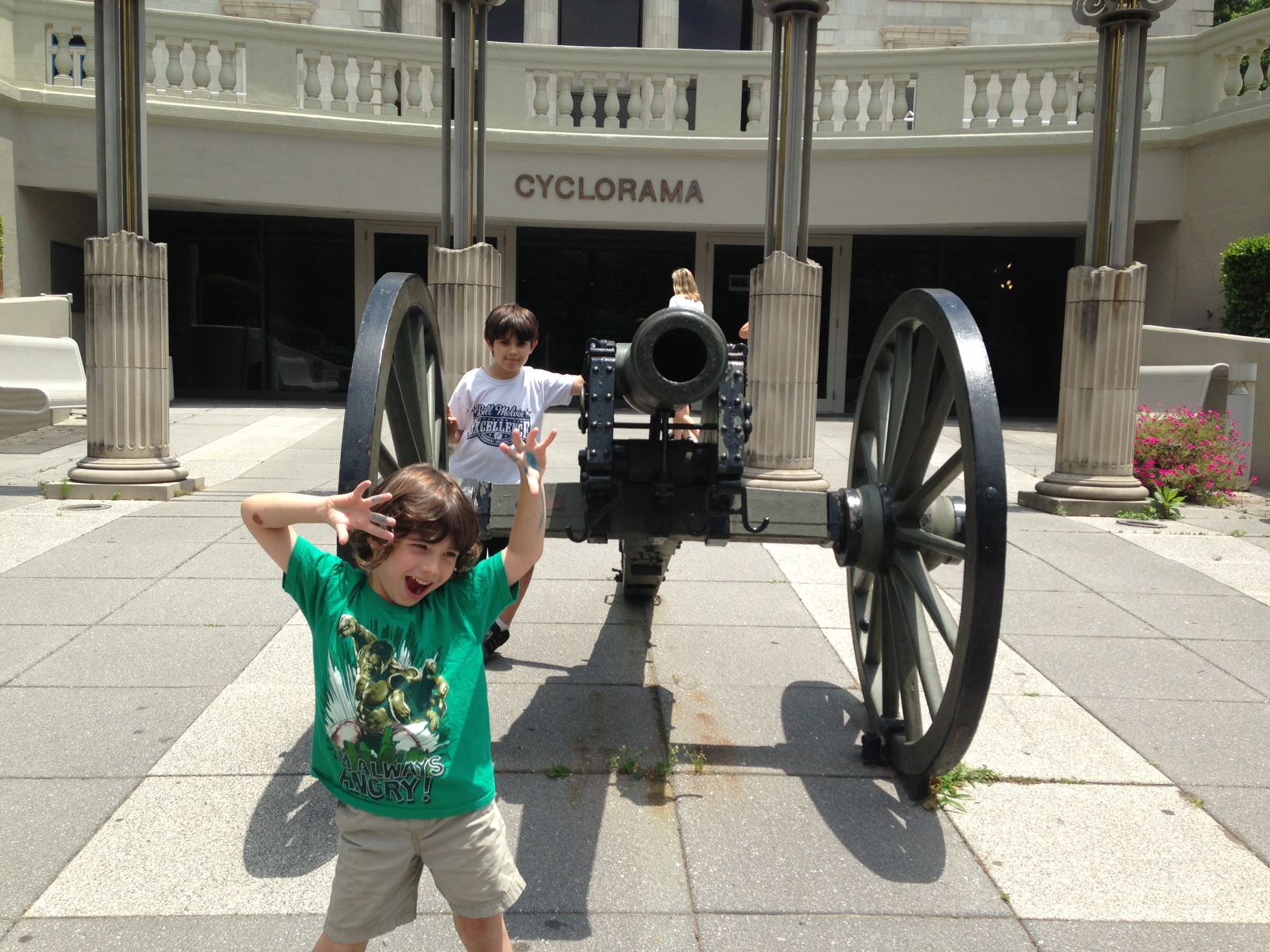 Atlanta Cyclorama
It doesn’t get much more old school Atlanta than this – an epic circular painting (or cyclorama) depicting the Civil War’s Battle of Atlanta. The painting has been a fixture in Grant Park since 1893. Back then admission was 10 cents! Today, the 42-foot-tall painting is one of only three cycloramas remaining in the United States. Lights, narration, sound effects and rotating seats add to the drama. The museum also features a 14-minute film on the Atlanta Campaign and the actual steam locomotive Texas, which played a key role in the Great Locomotive Chase of 1862.

Cost: Adults are $10, children ages 4-12 are $8, and children 3 and under are free.  Combo tickets are also available through Zoo Atlanta which is located next door.

Tip: While at the Cyclorama, take a stroll through Grant Park. The city’s largest and oldest public park, it was established in 1883. Download this Walking Tour before you go! 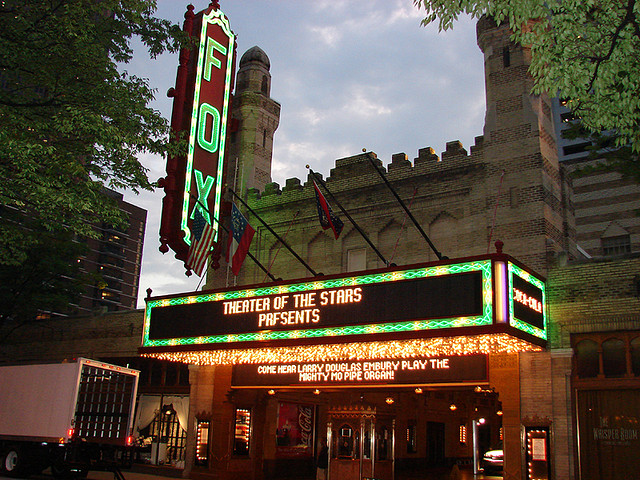 Fox Theatre
The beautiful Fox Theatre, built in 1929, is a great place to see a show. However, what’s even cooler is going behind the scenes on a guided tour of the historic building. It’s hard to believe that this former Yaarab Mosque (originally built by the Shriners) and movie palace was slated for demolition in the 1970s. The public outcry to save the Fox helped launch Atlanta’s preservation movement. From the starry ceiling to the orchestra pit to Mighty Mo’ the organ, the 60-minute tour focuses on history and happenings at the Fabulous Fox.

Tip: Tours are offered four times daily on Mondays and Thursdays and twice on Saturday mornings. Book online or call for times and tickets. 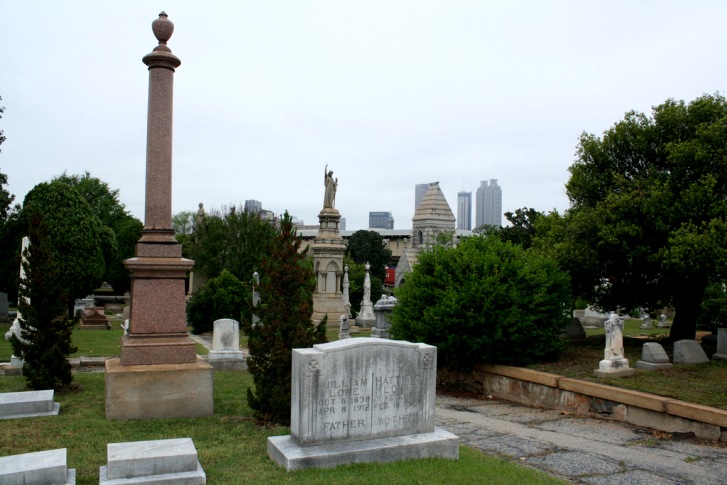 Oakland Cemetery
Don’t be spooked by one of Atlanta’s coolest architectural and historical treasures. Oakland Cemetery was founded in 1850 and is the final resting place of some 70,000 residents, including almost 7,000 Civil War soldiers. The graves of Gone With the Wind author Margaret Mitchell and golfer Bobby Jones are two of the most visited. For a more in-depth look, catch one of Oakland’s guided tours. Tours focus on architectural features and social themes. With its African American section, Jewish sections, military memorials and mausoleums dedicated to some of the city’s most prominent families, the cemetery provides a broad view into Atlanta’s history.  Even if you don’t have time for a tour, it’s a great place to take a stroll among ancient oaks, gardens and beautiful monuments. And believe it or not, kids love it!

Tip: Check out the many events that Oakland offers throughout the year, including Halloween Tours and the Tunes at the Tombs and Sunday in the Park festivals. 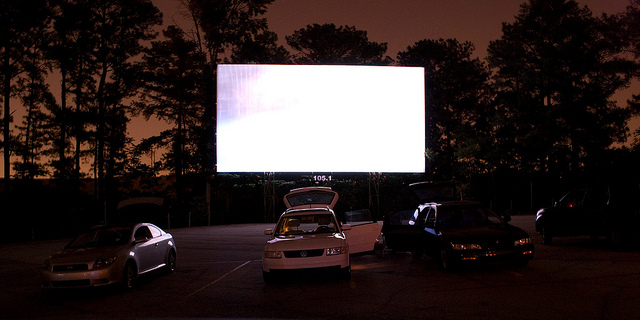 Starlight Six Drive-In
Operating since 1949, the Starlight is one of the few remaining drive-in movie theatres in the country. While not all films are family-friendly, there’s usually at least one G or PG rated feature among the new release films they show. Pack a picnic and arrive early to get a good spot. It is sure to be a memorable “old school” experience. Each admission includes a double feature!

Tip: Bring cash as credit cards are not accepted. 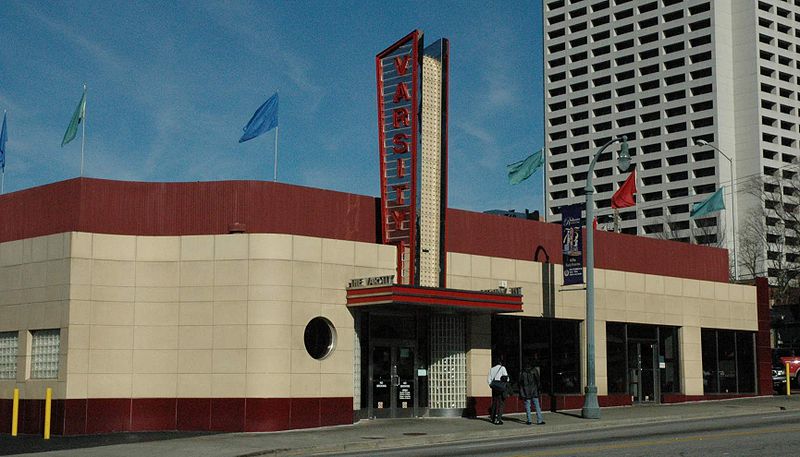 The Varsity
Where does the President of the United States go when he’s visiting Atlanta? The Varsity, of course. The original midtown drive-in has been a constant fixture on North Avenue since 1928. Now there are several locations across the metro area, but the original is the best. Eat in the car (for dramatic effect) or go inside to enjoy your chili dog and onion rings–or other Varsity classics. The kids will be happy to have a Varsity hat and Frosted Orange. It may be impossible to be considered a “real Atlantan” if you don’t eat here at least once!

Tip: Coach your kids on Varsity lingo before you so they’ll know what to say when asked, “What’ll ya have?”

How do you teach your kids about their history? Tell us below!

Photos courtesy of the author and Creative Commons via Flickr