The largest portable ferris wheel in the United States (it’s nearly 20 stories high), SkyView provides riders with magical city views coupled with a birds-eye view of whatever is going on at Centennial Olympic Park—which during the holidays means lots and lots and lots of twinkling lights. Here’s what you need to know before you go. 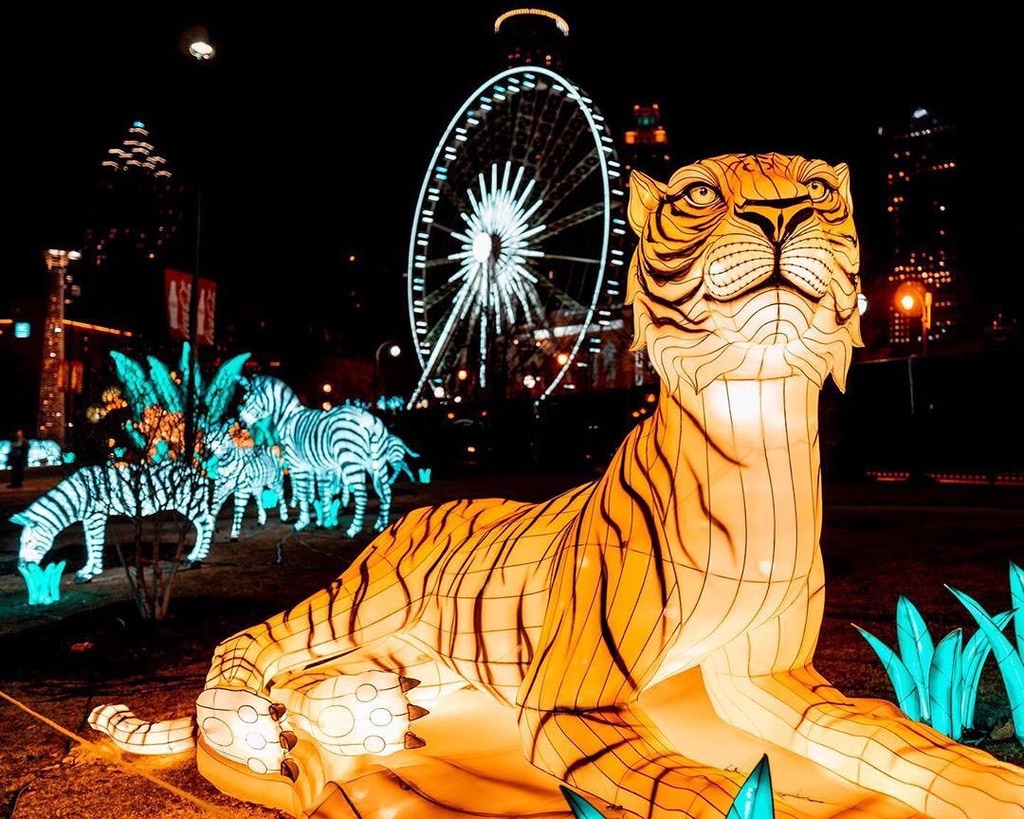 What to Expect Since SkyView is still so new, you might expect to wait a little while (generally no more than 20 minutes after you’ve bought your tickets) before boarding your gondola. Although outdoors, the waiting area is covered and has several fans aimed at the line. A photographer is on hand to capture your “before” image as you wait in line, which you can purchase with it’s digitally re-mastered background after you exit the ride. Each air-conditioned gondola is filled with only people in your party (unless someone is riding alone, in which case individuals are put into a gondola with another party), and can accommodate up to six people. Inside the gondola are two benches that face each other, and the view on the way up is to the West, while your view on the way down faces East. During your initial rotation you will likely stop several times as they continue to load the wheel, but then on your second, third, and fourth rotations you’ll be rolling with few interruptions. The entire trip once your securely tucked into your gondola takes about 15 minutes. 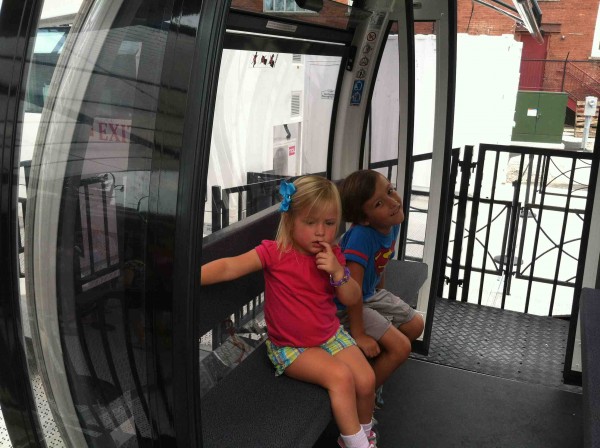 Where to Go Located near the intersection of Luckie Street and Centennial Olympic Park, SkyView is easily accessible from either the Interstate or any major in-town artery. You can find it just South of Centennial Olympic Park (near the water fountains), and there is parking in an unattended lot immediately next to the ferris wheel (plan on paying $10 to park in the lot closest to the wheel, or $5 to park a few blocks away). Making a day of downtown? Park at the deck for the Aquarium and the World of Coke, and leave your car there all day until you and your crew of exhausted littles scream “Uncle!” and head towards home. TIP: In the event that you do decide to hit one of the other attractions downtown (see our article on the Coolest Month Ever to decide among the Children’s Museum, the World of Coke, and the Aquarium), be sure to head to SkyView first. A moderately long walk from the Aquarium/ World of Coke parking lot will be much better tolerated on the front end of your day than on the back end. 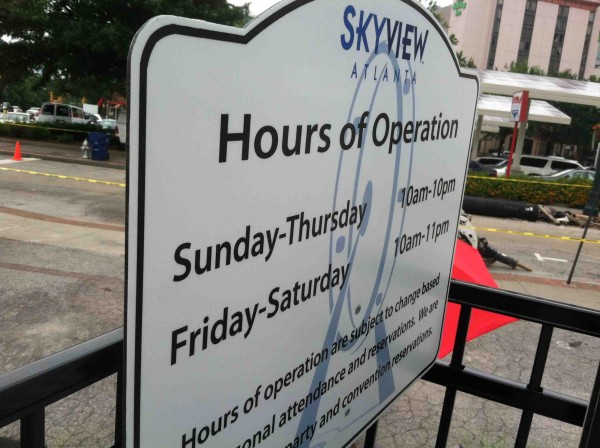 When to Go SkyView is open 7 days a week, from 10:00 a.m. to 10:00 p.m. Monday through Wednesday, and from 10:00 a.m. to midnight Thursday through Saturday. On Sunday, SkyView opens at noon and closes at 10:00 p.m. TIP: Since it’s summer and absolutely none of our kids are staying up until dark since that would be waaaay after bedtime (wink, wink), a daytime trip to SkyView is best made any time from 10:00 a.m. until about 5:00 p.m. The crowds are thinner, the lines are shorter, and if you go in the morning, the heat is less stifling. Be aware, however, that they’ll shut the whole thing down if it’s lightning (as those are some fireworks nobody wants to see up close). 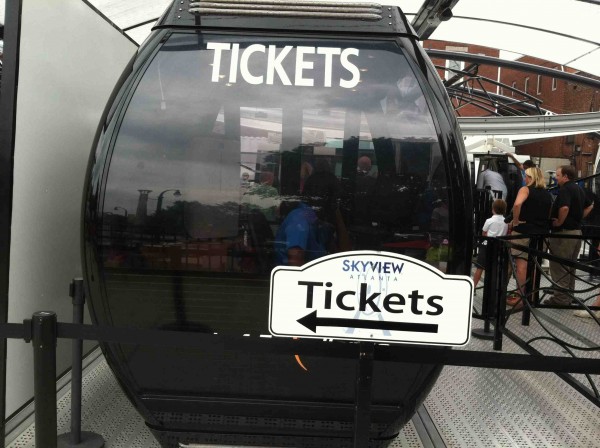 What to Take Since we’re parents, the idea of specifying what to take to an attraction like this is a little redundant. We’ve got our emergency kits filled with changes of clothes, diapers, drinks, and snacks pretty well figured out. However, since SkyView currently has no restroom options beyond the port-a-potty at the back of the lot, be sure to empty bladders before you go and bring your hand sanitizer in case you must go where no mother wants to go with kids. The nearest concessions are in Centennial Park, so certainly bring water. And, since the ride will rock their world (bring your camera!) and they will not want to leave, it might not be a bad idea to sneak a few dum-dums into the side pocket of your bag. We’re just keeping it real. 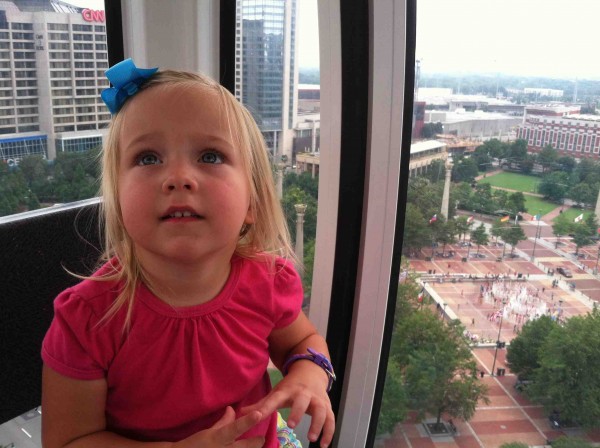 What Not to Take Basically, don’t take anything you wouldn’t take to the airport, and also be sure to leave Fido at home (as if any sane mom would tote all her kids downtown plus the pooch). If you’re doing a strategic strike on the ferris wheel alone and don’t plan to hit any of the other downtown attractions, you may not need a stroller, depending on the number of kids you have in tow (strollers aren’t allowed in the gondola, but there is a stroller parking area located near the base of the wheel). 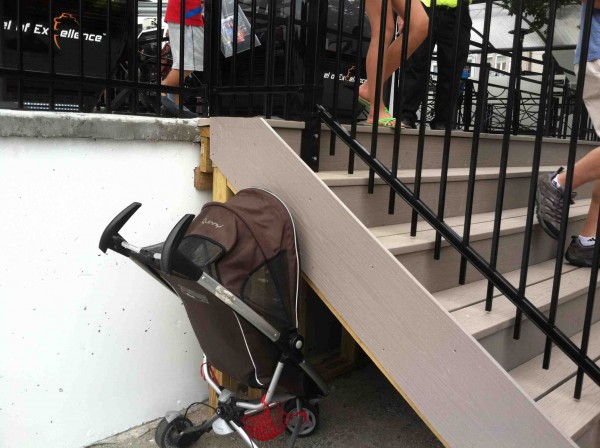 What Else Being one of the first to experience Atlanta’s newest attractions is pretty cool, but if your pack is super posh, you can purchase tickets to the VIP gondola, replete with leather seats, tinted windows, a glass floor, and no waiting in line. For the birthday planners out there, email SkyView’s dedicated event coordinator to begin brainstorming together on the best birthday party ever. 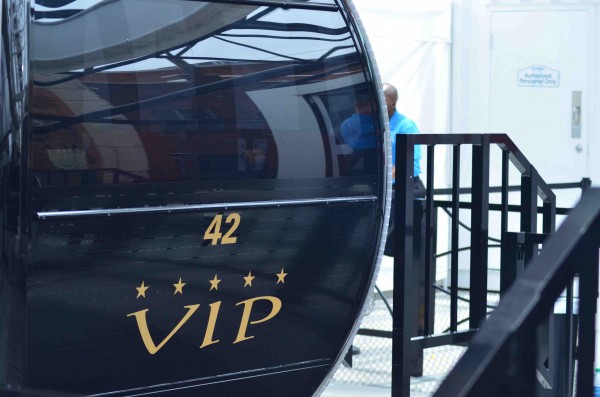 Why to Go While a trip into the heart of downtown can sometimes present a challenge (one way streets, construction, or events that we’ve never even heard about that attract thousands of people to a six square block area and catch us by surprise), SkyView is worth the effort. Does Superman fly? Yes. Does Spiderman defy gravity? Yes. Can your kid (and you) feel like a Superhero as you slice through the sky on a giant ferris wheel? Absolutely. Go. Be a Superhero. 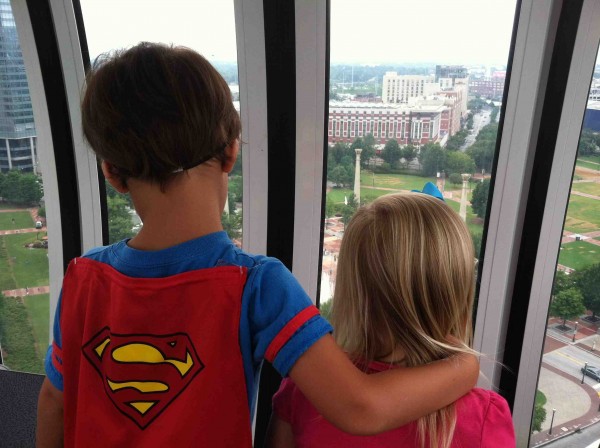 Details: SkyView Atlanta, 168 Luckie Street NW, Atlanta, Ga 30303, Adults $14.45, Seniors and Military $13.00, Children 3 and older $9.10, Children 2 and younger free What do you think of Atlanta’s new ferris wheel? Tell us below! –Shelley Massey All photos courtesy of the author