If you think you have to choose between never caving on the topic of a cell phone or letting your child tumble freely into the tech abyss—think again. Turns out, not all phones will turn your kid into social media junkies or video game addicts. Some phones will do just what they’re supposed to do, i.e., help you communicate with your child.

According to a report from Digital Wellness Lab at Boston Children’s Hospital, the average age at which most kids get a cell phone is 10, with most parents reporting they got their kids a device to connect with them and keep them safe (especially when they’re away from home). The report also said that while many parents worried beforehand about a phone having negative effects, it usually did not live up to those fears (especially when the phones were filtered and supervised).

But before you hand over the keys to the cellular kingdom, consider what sort of freedom you want your kids to have: Do you want them to have a phone only for calling and texting, or are you OK with a few games and apps? Do you want to be able to control the phone’s every feature—or do you just want a remote view of the action? We tried out the top options on the market; keep reading to see the pros and cons of each one below.

Phone watches are great because of the obvious—they’re physically strapped onto your child’s body. That means you don’t have to worry (as much) about whether the phone will be left at school or dropped onto the ground. They’re also usually limited in features, so your kid won’t be glued to the screen all day long. And while you could shell out the nearly $500 for an Apple watch, there are less expensive options that are designed for younger wearers. These include:

Verizon’s sleek little smartwatch is designed specifically for kids. It’s waterproof, durable and easy to navigate—plus kids will love fun (but limited) features like a step counter, exercise games and a voice changer.

Makers of the Gabb watch promise to offer “tech solutions without distractions.” That means a phone watch that lets your kid call or text 10 pre-determined contacts, plus GPS tracking to keep your child on a digital leash while they’re out in the world.

Remember the days when a phone was just a phone (you know, and not a mini computer)? Some phone-makers want to bring that era back, so you can give your child a simple phone without all the distractions. With these phones, your kid won’t be able to load TikTok if they tried:

The Gabb phone is the perfect “first phone” for kids who can handle having a phone instead of a watch (I.e., they’re not going to leave it at school or a playground the first week of using it). Sleek and straightforward, Gabb uses a  modified ZTE touchscreen smartphone to give kids calling and texting capabilities without internet, gaming or social media features. Kids will love the way it looks and feels (you’d never know it wasn’t a “real phone,” says our tester); parents will love that their kids can’t do much more than use it to communicate.

2001 called and wants its phone back. If you can get your kids on board with the retro vibe of this old-fashioned flip phone, the Daisy is a great way to give your kids a phone for the sole purpose of keeping in touch. That means, they can talk and text—but that’s about it (Note: Don’t bank on long texting conversations as the small touch screen makes it tough.). If zero-distractions is what you’re going for, it doesn’t get more basic than this.

Cost: $195 (plus whatever your carrier charges for adding a phone line)

Best Phone for Giving Your Kids Apps… but Not “Those Apps”

Billing itself as a “phone that grows up with your child,” the Pinwheel may be the best of both worlds for your little techie: It has tons of apps for your kid to peruse—but they’re only apps deemed educational or enriching by Pinwheel’s team of curators. “Using a phone as entertainment doesn’t set kids up well for success,” said Pinwheel’s “Chief Mom” Shelley Delayne. “Using it as a tool to help manage their life, using it for communication, using it to learn new skills — those benefit a kid.”

That means YES to Kindle, Chess and Scratch, and NO to TikTok, Instagram and Facebook. Parents are given the control to pick and choose from the more than 250 curated apps and decide which—if any—should be available on their child’s device.

Cost: $149-$329 depending on the model you choose (plus $15 a month for Pinwheel subscription and whatever your carrier charges for an added phone line)

Are you ready to give your kids a no-holds-barred phone but still nervous about what they may say or do with that freedom? The makers of the Aqua One phone by Cyber Dive believe kids (mostly older) should be allowed to do what they want on their phones—as long as their parents have complete oversight. That means, on the Aqua One, that while parents can’t block messages or apps, they can see exactly what kids are doing on their phones at all times.

“Parental control software is a band-aid solution to a massive wound. It creates a facade of safety,” said Cyber Dive CTO and co-founder Derek Jackson. “It results in children exploring on their own, figuring out ways to circumvent the controls, and being exposed to new things that they don’t know how to interpret or understand. They aren’t as ready for the firehose of information that the internet provides because of parental controls.”

Jackson said that instead of controlling kids, it’s better to give parents access and teach kids mindfulness. “When a schoolmate sends your child a nude photo on Snapchat, you no longer have to worry about never finding out,” he said. “Instead, you can be the one to start the conversation with your child; not from a place of judgment, but a place of understanding and acceptance.”

Cost: The phone is free; $69 per month subscription

Parents have the control with this phone that is perfect for kids dipping their toes in for the first time. Troomie uses real phones with locked down features that include the pre-loaded KidSmart OS that can be controlled through the Troomi Parent Portal.

Geared towards nine to 12 year-olds, the Samsung phones are meant to grow with your budding tween and prepare them to responsibly use them as they mature. They offer military grade security, no social media apps or addictive games.

If You Want to Give Your Kid Your Old Phone

Do you have an old phone your kid is dying to inherit? Ready to upgrade your iPhone and want to give your child your current device? You don’t have to buy a new phone to keep your kid safe online. There is a multitude of phone/message filtering apps and devices to choose from—whether you want to block particular apps, read your kids’ text messages or pause the internet when your kid wants to play Roblox after school instead of doing homework. Here are our favorite apps and devices:

Bark – Bark monitors texts, emails, YouTube and 24+ different social media platforms for signs of potential issues like cyberbullying, adult content, online predators, drug use, self-harm, depression and suicidal ideation—and will notify you immediately if any of these are detected. It also allows you to block apps that you don’t want your child using or set particular times they can use them.

Available at bark.us for $9 per month.

Circle Home Plus – An external device that attaches to your router and lets you set screen time limits, pause the Internet, and filter content across every device in your home. You can also set a “Safe Search” and “YouTube restricted” mode that keeps explicit content off your child’s devices.  Want to reward your child with screen time? There’s a “By Reward Only” feature that’ll give your child more time or app play when you deem it as “earned.”

Available for $129 (purchase includes 1-year, then $9.99/month after the first year) at meetcircle.com

Screentime for iPhone – Available on all iPhones, Screentime can block apps or websites you don’t want your child to visit and set bedtimes or “downtime” hours. You have to do this from the device itself, but it’s password-protected, so kids won’t be able to change the settings unless they see you tapping the code.

Google Family Link – For Android or Google phones, Family Link lets you view app activity, set screen time limits, filter specific websites and get reports showing how much time kids are spending on their favorite apps (and what time of day they’re doing it). You can also block apps your child wants to download from the Google Play Store, as well as block in-app purchases.

Available on all Android devices for free. For more information, click here.

Voices: Should I Get My Kid a Smartphone?

Voices: You Want a Cell Phone: Here Are My 5 Non-Negotiable Rules 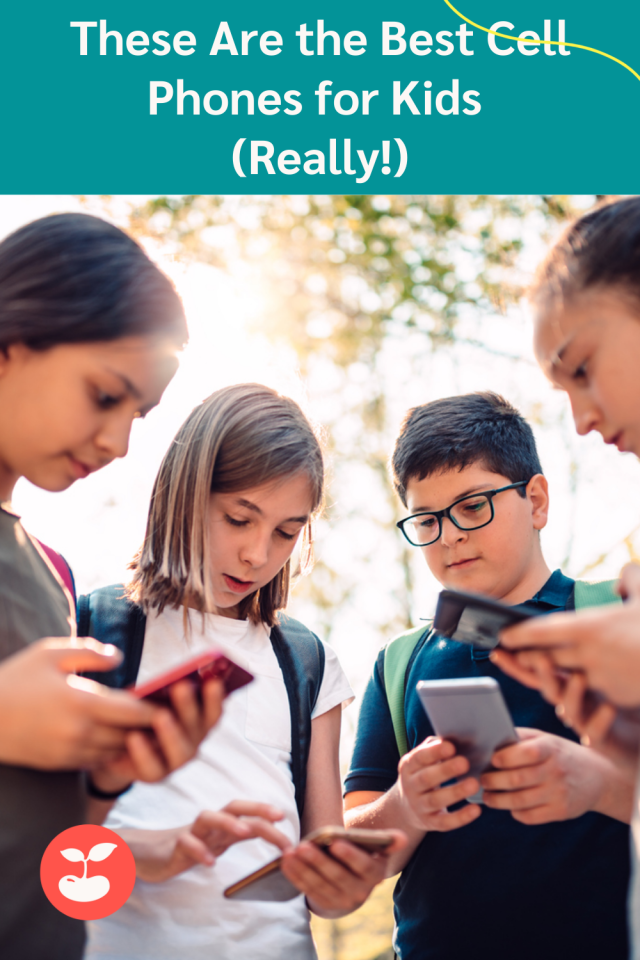