Wrigleyville is where Cubs fans go bananas. And now kids will whoop it up there, too. That’s because Margaret Donahue Park just opened on School Street—and it’s unlike any playground we’ve ever seen. Full of Chicago accents (like play structures resembling Willis Tower and the Hancock Building) and homegrown spirit (check out the huge Cubs logo painted on the turf), this is a play spot with heart. Oh, and did we mention the splash pad? Read on. 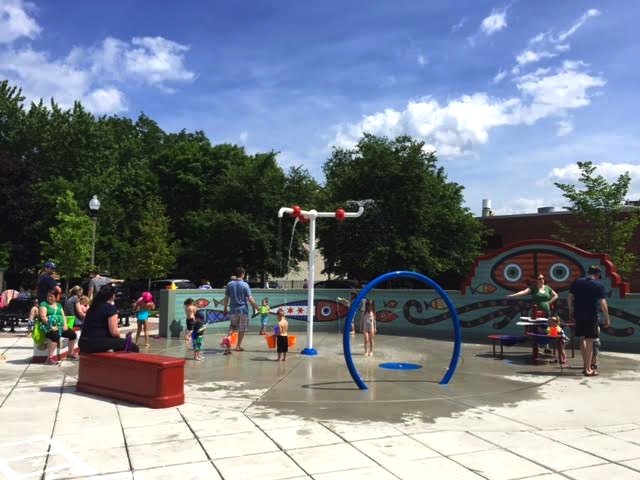 Splash Pad Madness
You’ll come to Margaret Donahue Park, a gated paradise located just blocks from Wrigley Field, to swing, climb and play. But let’s face it: In summer, you’re really there for the splash pad. It’s small and simple, but in great shape and so colorful. Bring plastic buckets and collect water underneath a revolving spout; it turns around and sprays up, down and all around. There’s also an arched sprinkler to run through and cool off in, and a ground fountain that shoots up with gusto.

While kids frolic, parents can sit on benches or a circular table. A bright, whimsical mosaic mural sweeps around the H20 action for a backdrop as joyful as the summer sun. But don’t spend all day in the water, because there’s more in store … 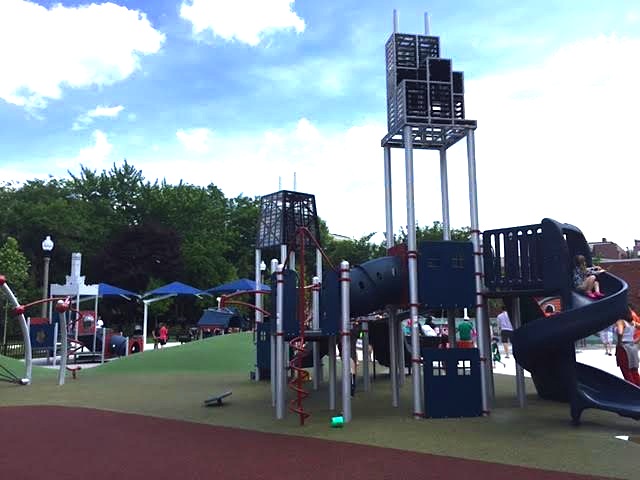 Playful Chicago Touches
This isn’t just any spiral slide and climbing wall. They’re part of a mini Chicago universe—a play structure topped off by re-creations of Willis Tower and the Hancock Building. Giving the park its true local feel, this red and blue attraction for older kids (ages 4-8) has it all, from a slide to an elevated tunnel to a climbing wall to a spinning climbing pole. Just a few feet away is a smaller area for toddlers, and it’s crowned by a re-creation of the Historic Water Tower. 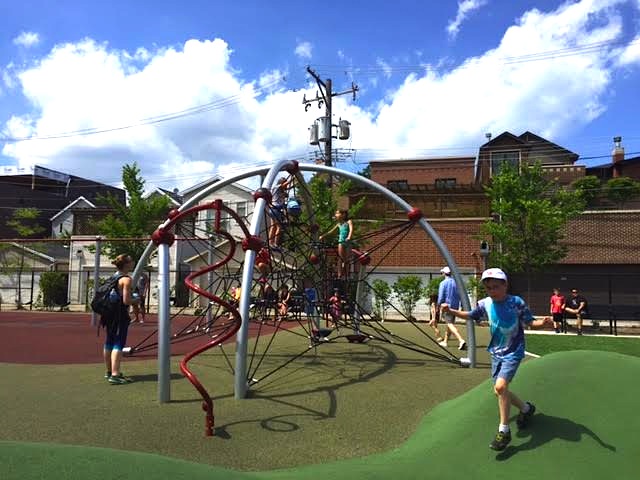 Challenges for All Ages
Ambitious kids will want to activate their inner Spiderman on the large climbing web made from interwoven ropes and plastic steps. Go for a ride on the attached pole that spins ’round and ’round. Then take off running up and down the cushy rubberized mounds nearby. Just don’t be surprised if kids with water buckets race by — water play doesn’t stay contained to the splash pad.

A swing set has two bucket swings for babes and a handicapped-accessible swing, along with three standard swings. Set at the far end of the playground, they’re great perches to soar above the action and take everything in. 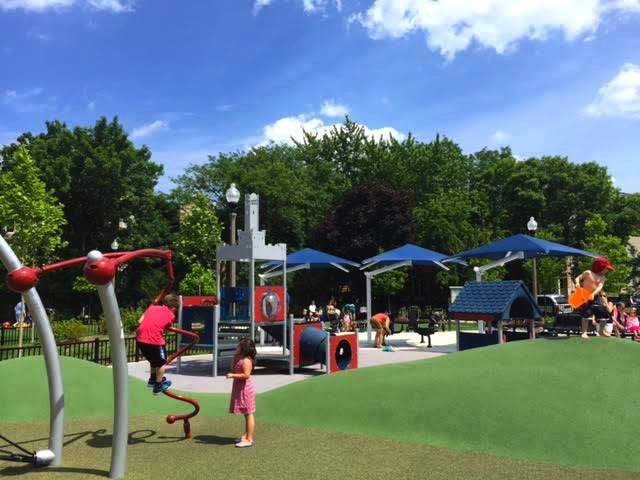 Turf for Picnicking & Playing
Keep in mind this park has very little shade, but there are tables for picnicking that are sheltered by canopies. From the tables, you get a good view of just about every nook of the park. And since it’s all gated, this is a safe place for little ones to roam free. Pack a lunch and spend the morning or afternoon.

The far end of the playground invites kids to really run wild. It features a large swath of turf painted with the Cubs logo. Here, you can do just about anything, from toss a Frisbee to kick a soccer ball to play a friendly game of tag. You could even bring your baseball tee and wiffle ball. After all, this park is named after one of the first woman executives in major league baseball. 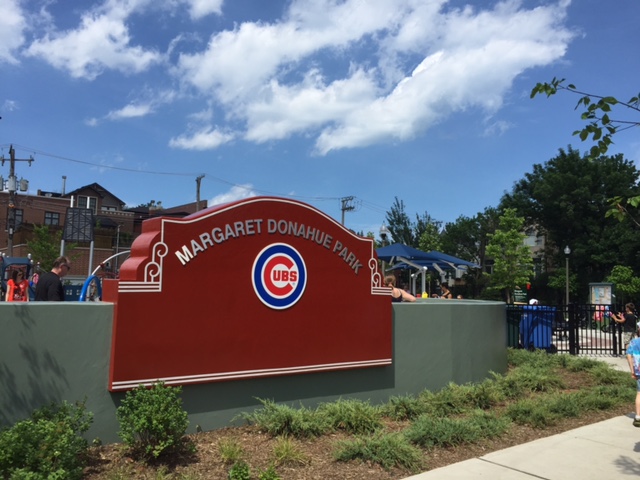 Good to Know
Margaret Donahue Park is open daily, from 6 a.m.-11 p.m. Admission is free. There is no parking lot, and street parking is permit only during Cubs games. While parking can get tricky, a visit here is worth a few block walk — just bring a stroller or wagon for little ones.

Have you been to this amazing new playground yet? Let us know what you think of it in the Comments!