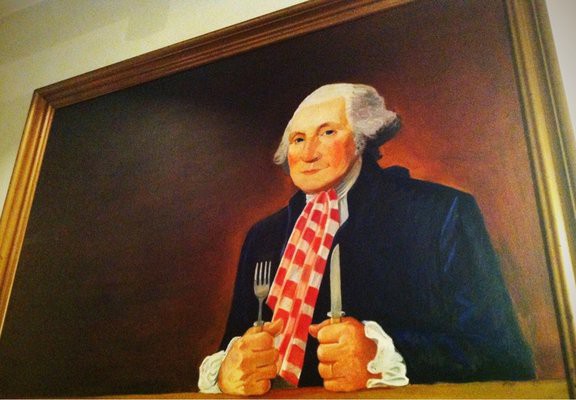 photo from Gatsby’s Tavern Alexandria by Laura Z via Yelp

George Washington was the first president of the United States but he did not chop down a cherry tree. Read on for a few more interesting facts about the man behind the myth.

2. His family arrived in America in 1657, on a ship called the Sea Horse of London.

3.He was an excellent dancer.

4. He did throw a silver dollar across the Potomac River. The Potomac is over a mile wide and silver dollars did not exist then. His grandson did say once that George threw a piece of slate across the Rappahannock River in Fredericksburg, which is narrower.

6. The cherry tree story is just that: a story. The tale is that Washington, as a little boy, chopped down a cherry tree in his family’s yard and told his father the truth about it, even though it meant punishment. This story was fabricated by a Mason Locke Weems, a bookseller who wrote the first biography about Washington (after George’s death in 1799).

7. George Washington had really bad teeth and was afflicted with many dental diseases and pain.

8. Washington’s white hair was not a wig, although he did powder his hair for the white appearance. Click here for a tutorial on how to rock the style.

Know any cool facts about George Washington? Share them with us in the comments below!