Tom Hanks famously said “There’s no crying in baseball,” but he’s never been at a game with a hot, tired, bored and hungry kid who’s in the middle of a grand slam-sized meltdown. While catching a game can be a daunting task with little ones in tow, we know for a fact that it can (and should!) be done. Here’s the scoop on maximizing your time, money and fun at Nationals Park as the Washington Nationals get in gear for their Major League Baseball season. 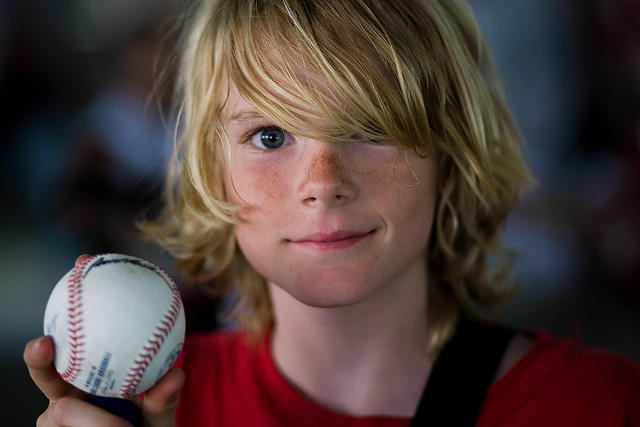 Getting There
Taking the Green Line Metro to the Navy Yard stop is your best bet, but be warned: trains will be packed shortly before and right after games, meaning your family will be getting up close and personal with thousands of other fans. Driving can be tricky thanks to limited parking and heavy traffic, but if you go to a Sunday game, free street parking is available in the neighborhoods just off South Capitol Street. Otherwise, expect to pay $15-$30 for parking in nearby lots. 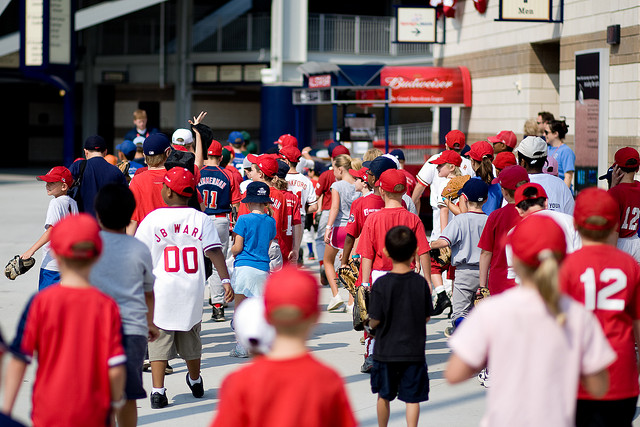 Finding Seats
There aren’t many bad seats in the stadium, but for day games, the third base side of the field offers great sightlines without being directly in the sun. If you sit in the upper levels along the first base line, you’ll get a peek-a-boo view of the U.S Capitol building. And the Nationals offer Family Fun Packs, which include concessions, for select weekend games. If you have antsy ones who won’t sit for long, an alternate plan is to buy standing room only tickets at the box office ($5) and then grab a reservation at the Red Porch restaurant, which has a great outfield view and good food to keep them occupied for a few innings. 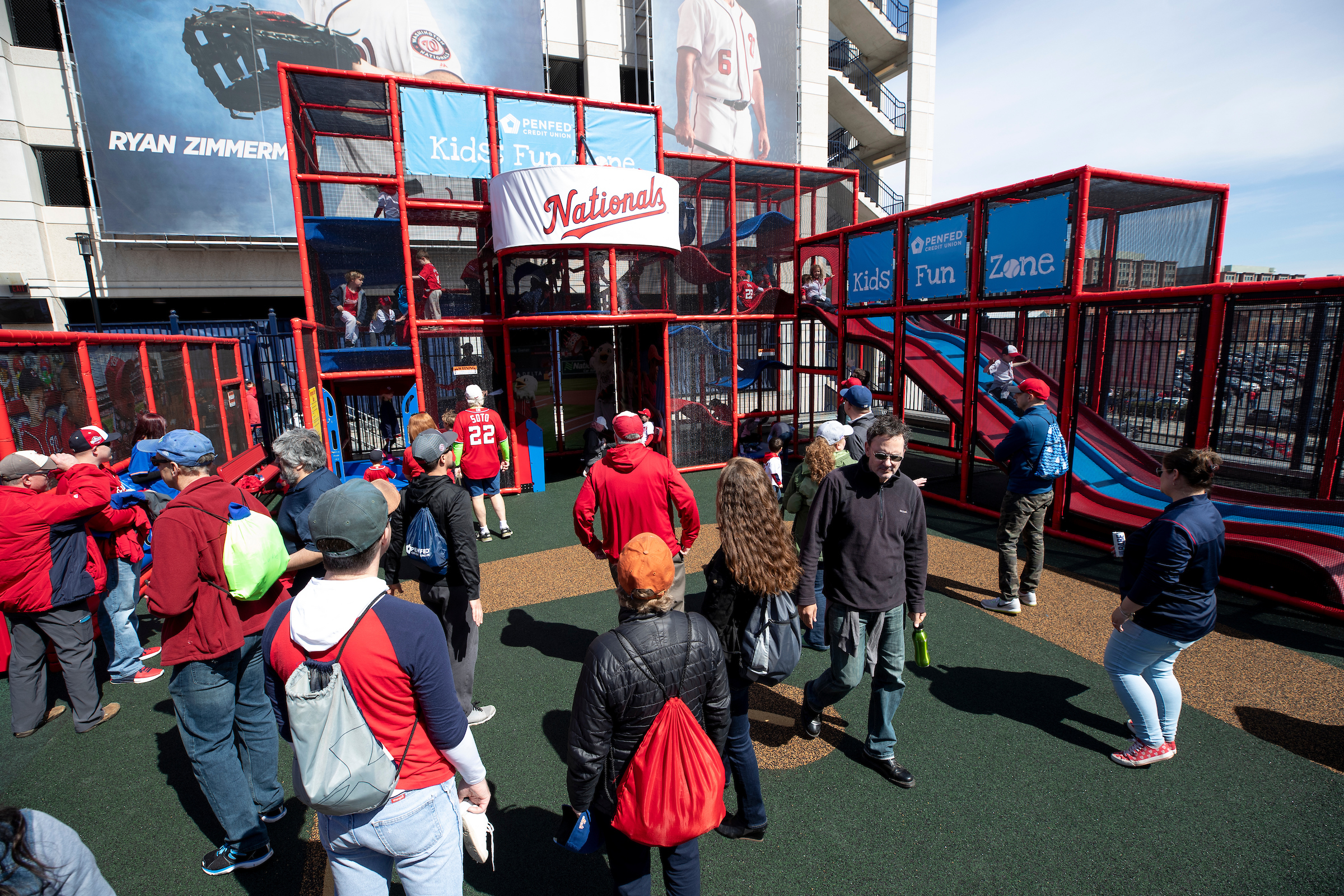 Filling Bellies
Kids love eating at sporting events, and fortunately, Nats Park has something for all tastes. To go along with the classic selections of hot dogs, ice cream and pizza, there are some special areas that likely will appeal to your youngsters. The Rookie stand (Section 143) offers junior-sized hot dogs, kid’s meals and PB&J sandwiches. You can get veggie tacos (Section 136), Korean fried chicken (Section 238), empanadas (Section 244), and lobster rolls (Section 140). There’s also a Gluten-Free Grill (located in Center Field Plaza) and a Kosher Grill (Section 145). Don’t forget, you can bring in outside items, as long as they are in clear, single-serve bags within a soft-sided cooler. 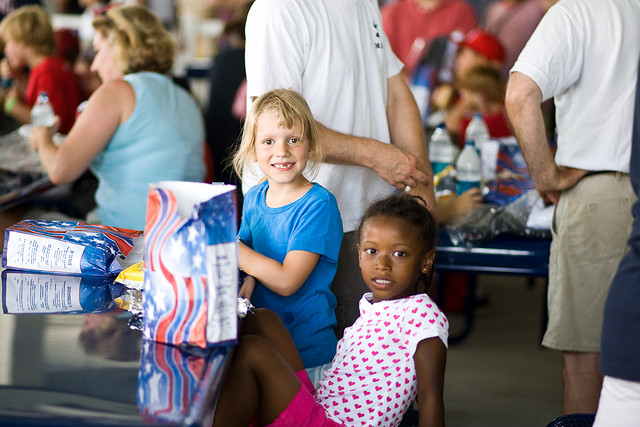 Having Fun
Other than the action on the diamond? Nationals Park has a children’s play area just to the left of the center field entrance, which is perfect for letting your little ones blow off some steam. After every Sunday day game, all fans 12 & under are invited to run the bases following the game, weather
permitting. Fireworks Nights will include four “Fireworks Friday” games, including Memorial
Day Weekend, Flag Day, and Labor Day Weekend, as well as a special “Freedom Fireworks” show on July 3. Make sure you’re in your seats for the Presidents Race, which occurs after the top of the fourth inning. The Presidents also make their way throughout the concourse, along with Nationals mascot Screech, so keep your camera handy. 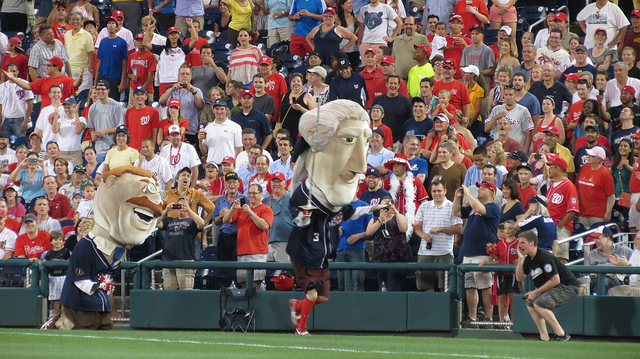 Scoring Extra Perks
The center field gates at Nationals Park open 2 ½ hours before the game starts, so if you get there early, it might be the best opportunity to snag a home run ball during batting practice. Folks get there early and line up along the outfield walls, however, so be quick and bring your glove. Fans must obtain a free voucher in order to participate in the autograph sessions, which happen every Sunday home game. Vouchers will be
distributed on a first-come, first-served basis at Section 103, starting when the gates open two hours before
first pitch.

Photos courtesy of MissChatter and Matthew Straubmuller via Creative Commons