According to the National Park Service, the most visited attraction in our nation’s capitol is The Lincoln Memorial. In fact, eight of the top ten visited places in the District are, you guessed it, memorials and monuments. While these landmarks are visually stunning, getting children to get excited about chiseled stone and cast metal can be well, challenging. There are a number of tours that can make zipping around the historic sites more fun. Like a segway tour or a guided kayak expedition at sunset. But if you want to bring those hunks of marble and sculpted bronze to life, read on for some simple tips to make a family trip to the monuments have more meaning. 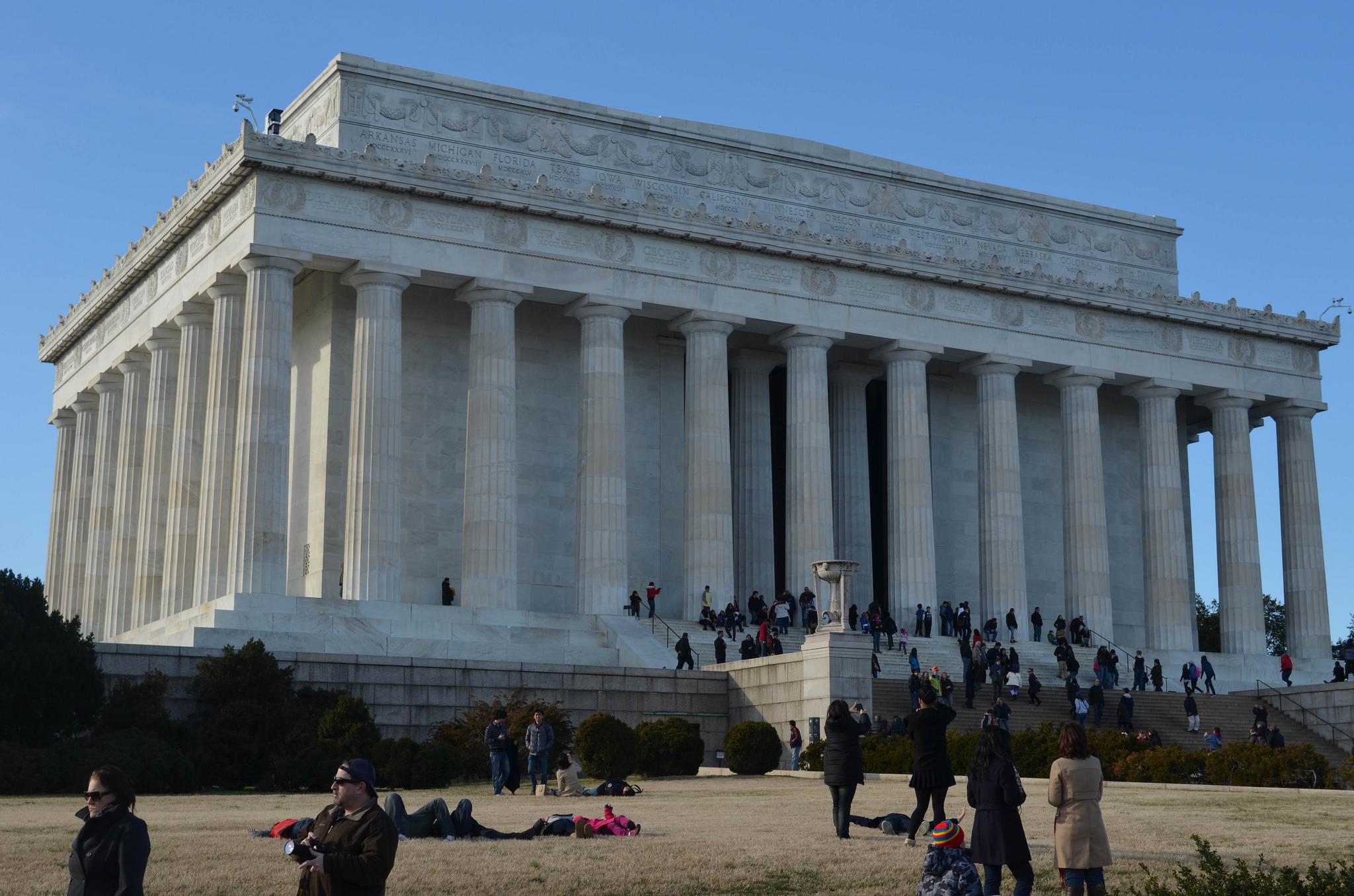 Photo: m01229 via flickr
The Lincoln Memorial
The Lincoln Memorial is arguably the most impressive of DC’s monuments. For one, it’s the largest monument dedicated to a person in the world. When you climb the 87 steps from the Reflecting Pool to the monument, you can feel the sheer magnitude of its size. The 16th president is seated inside, so we suggest you and your crew also take a seat! The steps to this memorial are an ideal place to sit and take in the view. It’s also a great place to read a book (after all, Lincoln was an avid reader).  Looking at Lincoln by Maira Kalman and I am Abraham Lincoln by Brad Meltzer are worth a read (or listen and watch here). 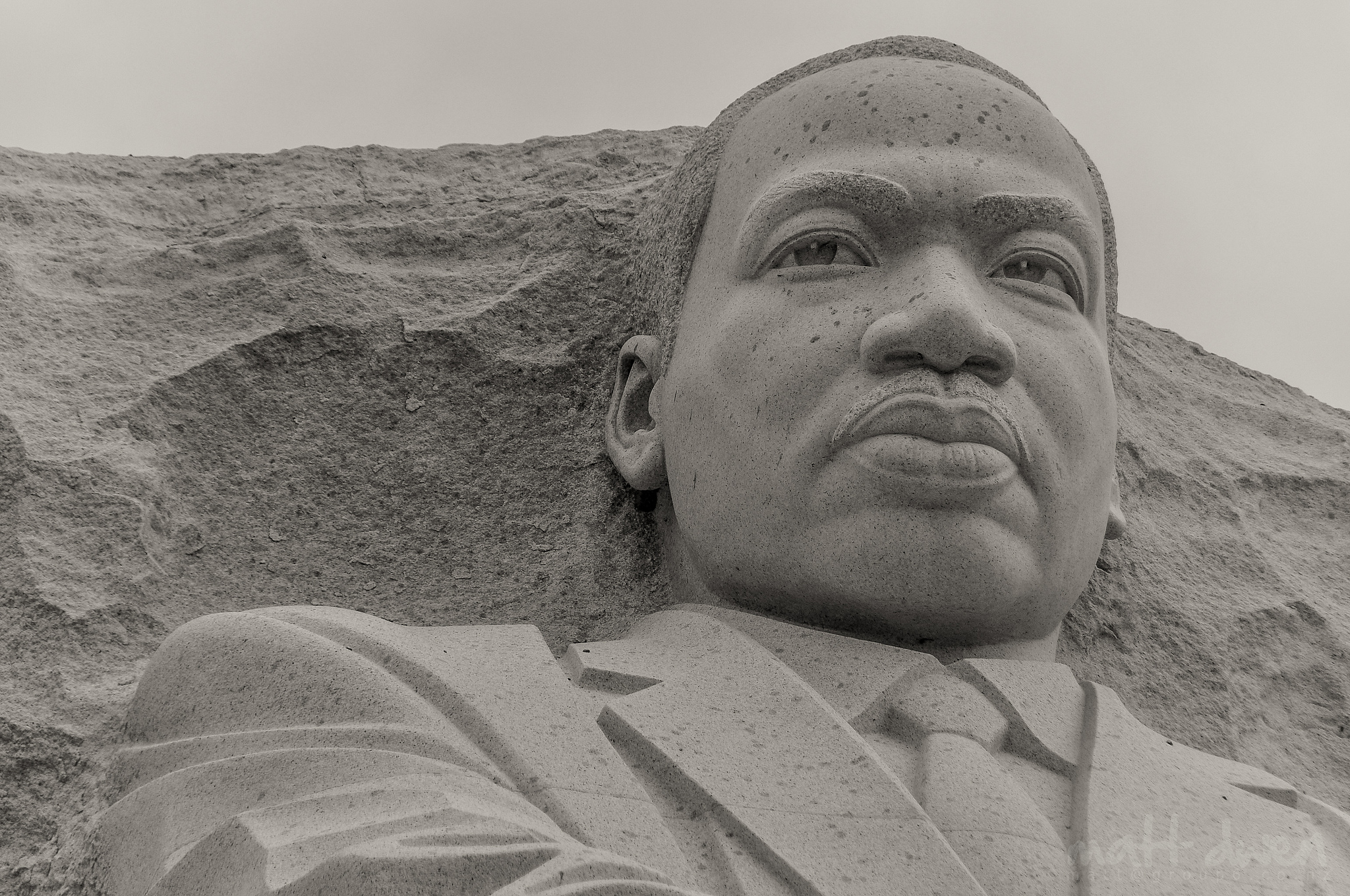 Photo: mattdwen via flickr
Martin Luther King, Jr. Memorial
To honor the most powerful voice of the Civil Rights movement, this memorial has 15 quotes etched in granite. And while the words are moving to read, hearing Dr. King give the famous “I Have a Dream” speech under his stone shadow is even more powerful (listening to the speech on the steps of The Lincoln Memorial is also a must do). You can download the speech from PBS (they also offer some educational lessons on the site). Let your youngest kiddos celebrate Martin Luther King, Jr. with their own voice; this little diddy is best sung to the tune of Twinkle, Twinkle Little Star: Freedom, Freedom, let it ring. “Let it ring, said Dr. King. Let us live in harmony. Peace and love for you and me. Freedom, freedom, let it ring. “Let it ring,” said Dr. King.
Online: nps.gov/mlkm 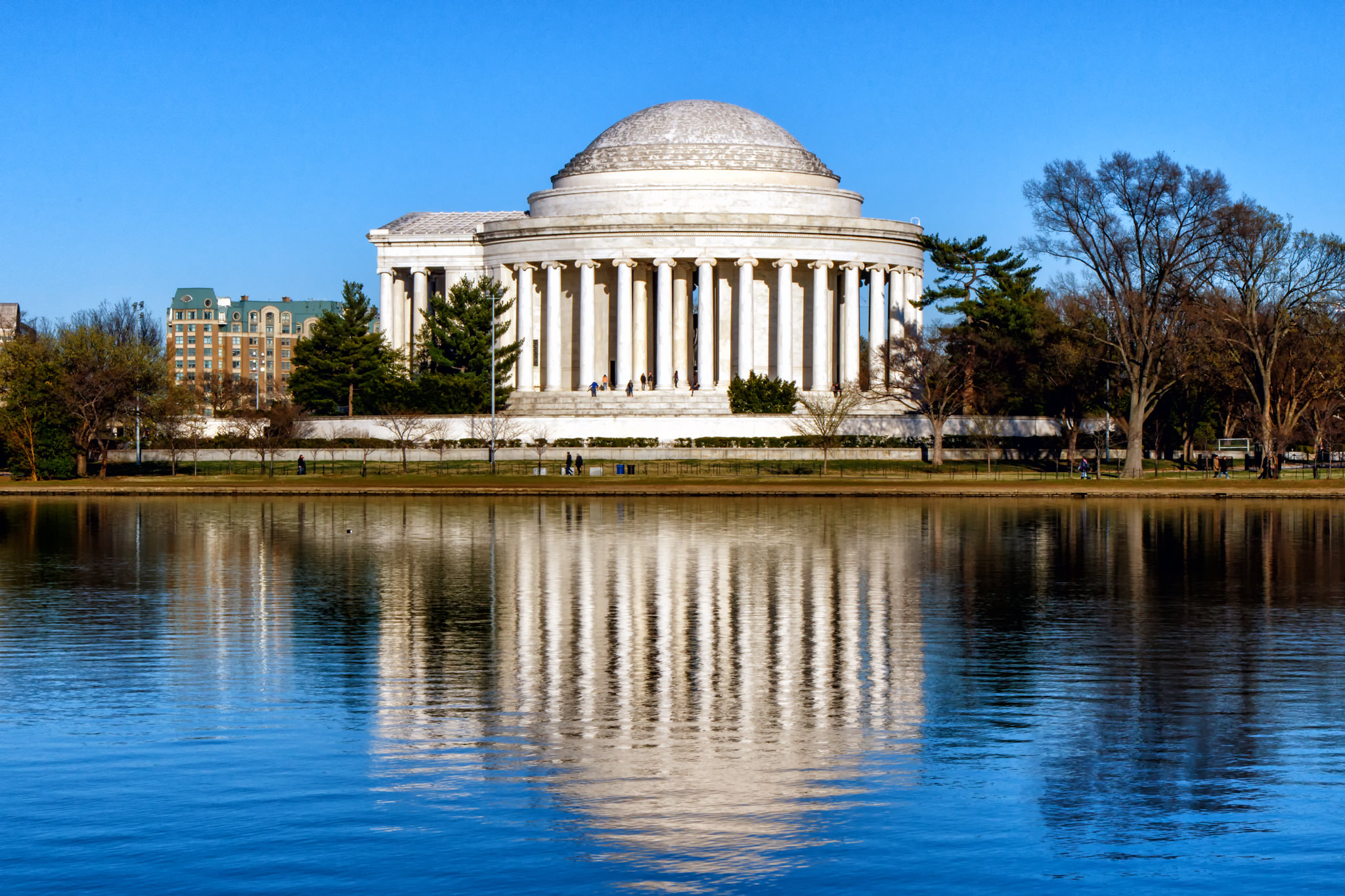 The Jefferson Memorial
The Jefferson is the majestic backdrop to many of DC’s most notable events, like the Cherry Blossom Festival. It was built to resemble the Parthenon of Rome and may be one of DC’s most iconic landmarks. It memorializes our third president, Thomas Jefferson, who is best known as the author of the Declaration of Independence. The complexities of the man — who penned the phrase “All men are created equal” while failing to free slaves on his own plantation— might be out of reach for your younger crew, but his passion for nature is easy to grasp. You can rent a peddle boat to explore the tidal basin or try fishing along side the memorial.  While studying nature, Jefferson amassed a great fossil collection (which you can view at Monticello); visitors can hunt for fossils which can be seen in the marble at the base of the memorial. 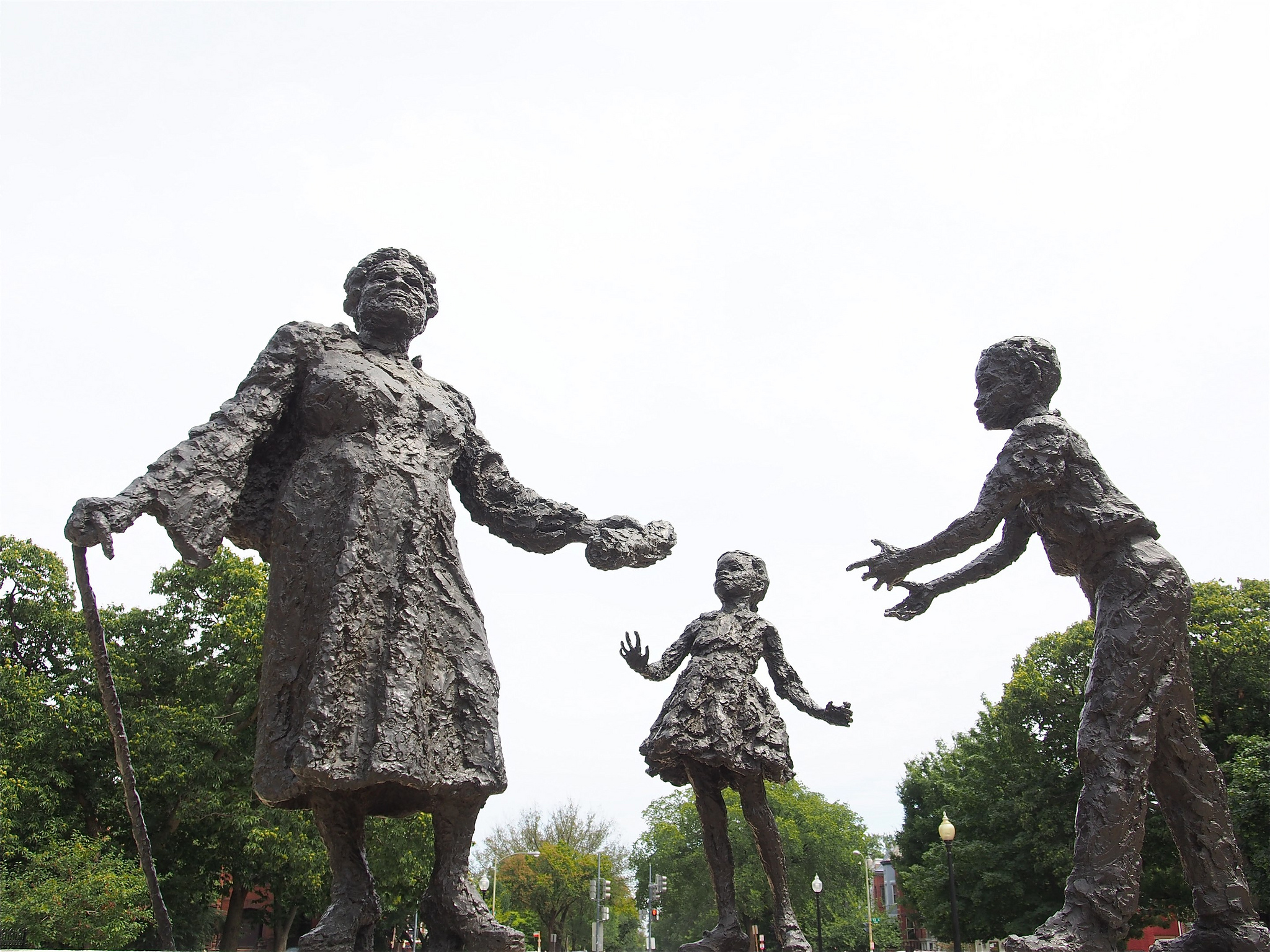 Photo: Miki Jourdan via flickr
Mary McLeod Bethune Memorial
The men memorialized on the National Mall aren’t the only inspiring individuals to have influenced our nation’s history; for a peak at the first DC statue to honor both a woman and an African-American, head to Lincoln Park to visit the Mary McLeod Bethune memorial (erected in 1974). Bethune is remembered as a civil rights leader, a suffragist and the first African-American woman to head a Federal agency. She may be best known for her contributions to education; she founded the Bethune-Cookman University, which is today’s only historically black college to have been founded by a woman. What better way to celebrate Bethune’s passion for education than with the game I Spy with sight words.  Come prepared with flashcards for the following words, which can all be found in the statue’s inscription: LOVE, HOPE, EDUCATION, RESPECT, FAITH, and DIGNITY. 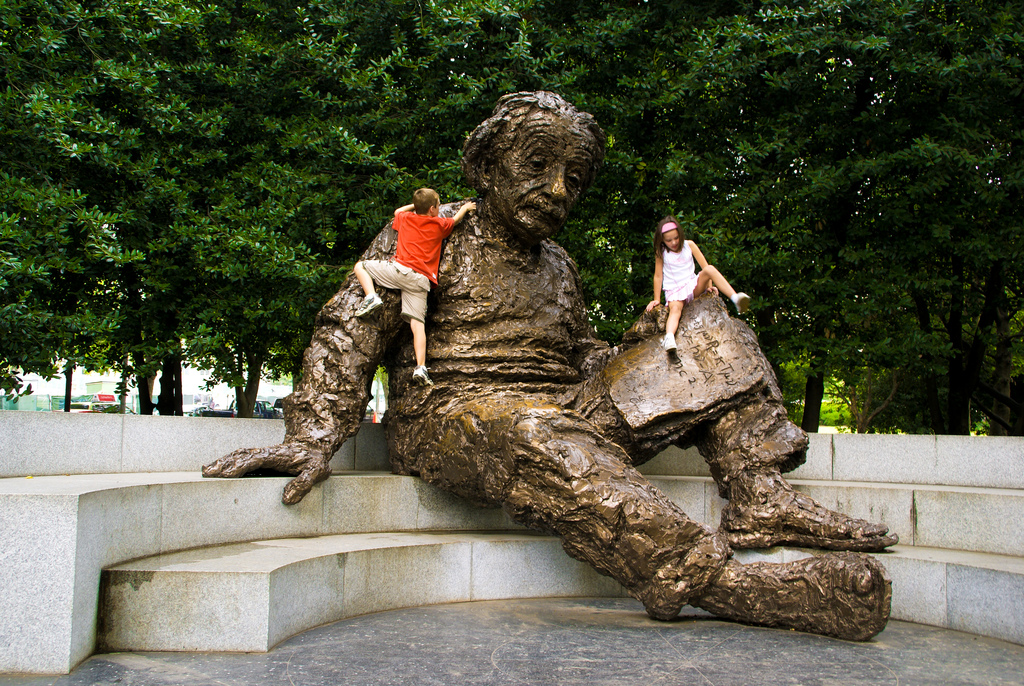 The most approachable statue in DC is the memorial dedicated to Albert Einstein. This pitstop across from the National Mall may be an opportune place to wax poetic about Einstein’s contributions to science, but we’ll be honest. It’s also a really great photo opp. The National Academy of Sciences encourages visitors to mug it up with the late scientist. And be shore to hashtag your photo with #PhotosWithAlbert.