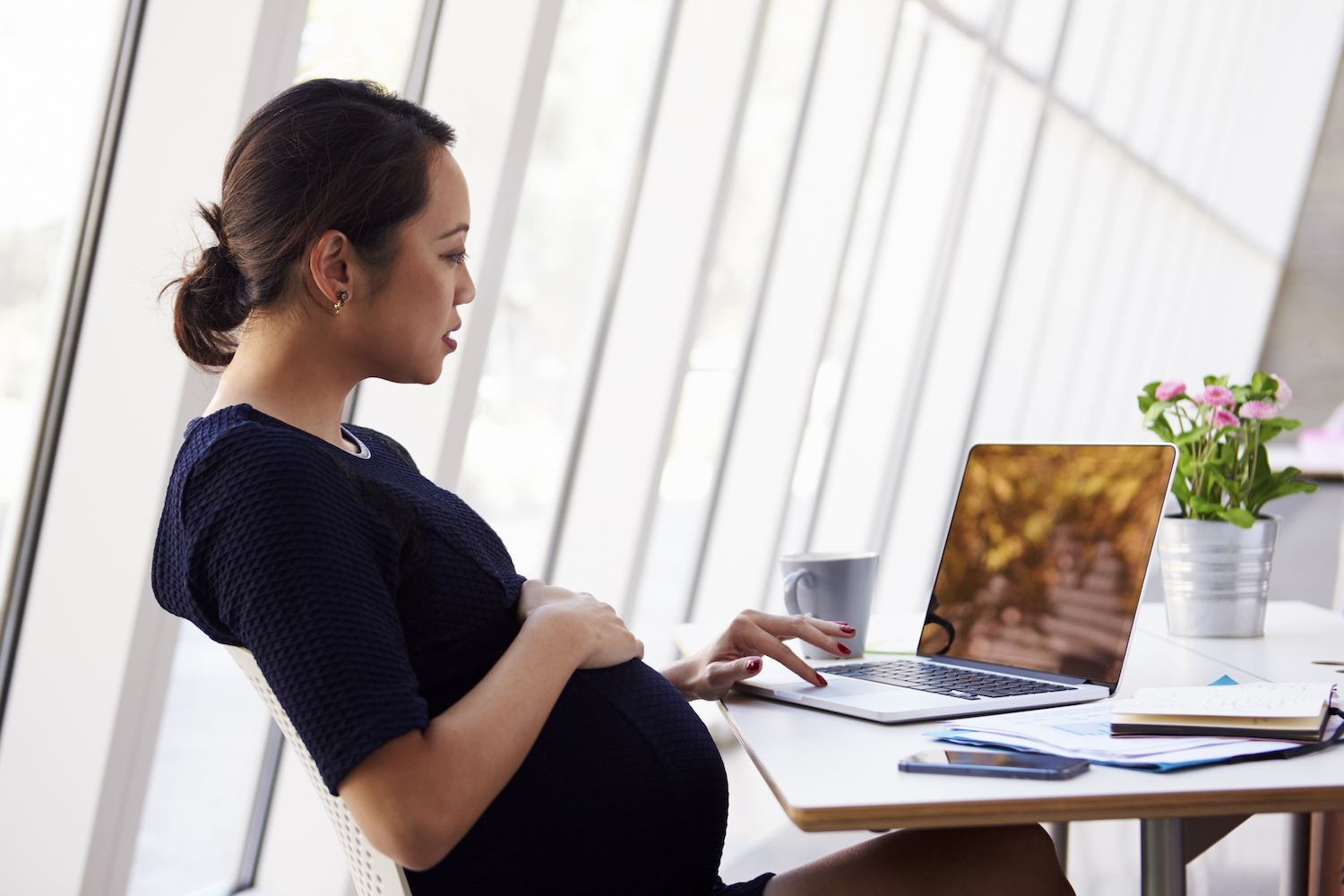 It was my first day at my new job.

I was so nervous that I felt like my heart was going to jump out of my chest. I had taken a hiatus from working when we moved across the country, and I had gotten comfortable with the stay-at-home mom life. But with my son at school full-time, it was time for me to return to the workforce and help out with the family finances.

Oh wait, did I mention I was pregnant? And that my boss had no clue?

Argh. The guilt. During the interview, I had an internal battle of epic proportions in my head on whether or not to reveal my pregnancy. I was about three months pregnant at the time so I looked like I might have eaten a little too much for lunch, but my pregnant belly wasn’t immediately obvious. So it’s up to me to tell the interviewers about my pregnancy.

The law says they are not supposed to ask, and I am not obligated to tell. But I felt so dishonest like I was lying by omission. I wanted this job badly because it offered flexible hours so I could pick up my son from school. Plus, I was running out of time—I was about to start on a job when I was in my third trimester and could barely apply what I learned in my training before going on maternity leave. In the end, my fear that my pregnancy would deter the company from hiring me trumped my guilt, and I kept my mouth shut.

But maybe I shouldn’t have.

Oh wait, did I mention that this was a vape company?

As I stepped into the building on my first day of work, I was met by a cloud of smoke. There was so much smoke in the air that I had trouble seeing through it. Then I realized what was happening. O.M.G. They allow vaping inside the building! And EVERY SINGLE EMPLOYEE vaped. All except me.

I immediately ran out of the building like a bat out of hell, drawing curious and surprised looks from everyone I passed on the way out. I called my manager from outside the building, and the following conversation ensued:

Me: “Good morning! Do you mind meeting me outside the front door?”

Manager: “Why? Are the doors locked?”

Me: “No, no, I just need to talk to you about something.”

Manager: “Oh, just come to my office! Do you know where it is?”

Me: “I can’t go inside the building. Can you come out?”

Manager: “OH…CRAP. I mean, wow. Stay outside. I will call you right back.”

I waited in my car anxiously for my manager’s call. I saw him run across the first floor from his office to the CEO’s office, face full of panic. Aw man, am I fired for not telling them I am pregnant? They can’t do that, can they? But how can I work in a building full of vape cloud that contains nicotine and risk harm to my baby?

After what seemed like forever (but in reality probably 30 minutes or so), my manager came out of the building with the CEO of the company. They politely asked me to go home and work from there, and not to return to the office until further notice.

For the next several days, I “worked” from home. Well, not really. I mean, I didn’t even step foot into my office yet, what work did I possibly have to do? I tried to learn as much as I could at home, but in the back of my head, I was mentally preparing to lose a job that I never really had.

My decision to not tell my hiring manager about my pregnancy during the interview kept replaying in my head. I was more than qualified for the job, and I blew the interview out of the water. Despite it being a vape company, I did not see any indication of employees vaping indoors during my interview. And as much as people are not supposed to discriminate against pregnant women, I felt like the fact that I will be taking care of a newborn within months of starting my job would have played into the hiring decision. How could it not?

At the end of the day, every day, I would get a call from my manager asking me to stay at home one more day. The top management was still discussing my case and hadn’t made a final decision yet. Lots of meetings were being held, and they had to call in the employment lawyer. Apparently, I was the first pregnant woman they ever had to deal with in the workplace so finding out I was pregnant was mind-blowing. I felt so bad that my pregnancy was turning the company upside down, but, hey, I did not expect to walk into a building full of vape cloud either.

Finally, after five days of deliberation, the management made a decision. I was told to come back to work the following Monday, but with no explanations. “Don’t worry, you will be fine,” was all I got from my manager.

So on Monday, I packed my lunch and drove to work. I carefully walked into the office, afraid to expose my baby to any more nicotine. But the air was clear. No vape cloud. What happened?

My manager pulled me into his office and told me to shut the door. He said to me in a hushed tone: “Management decided to ban vaping inside the building. We didn’t tell the employees why, so you don’t have to worry about people blaming you. We just told them that it was an executive decision that came down from the CEO to make the workplace more professional for our customers. And do not feel guilty about this, we have been tossing the idea of banning vaping inside the office for a while now. We value your work experience and your talent and if it takes banning vaping for you to come work for us, then so be it.”

Huh. Perhaps there is hope for humanity after all.

Betty Boiron is a mother of two who strives to inspire other moms to embrace motherhood as the hot mess it is. When she is not busy chasing after her kids or digging herself out of piles of laundry, you can find her writing on her blog Mombrite.