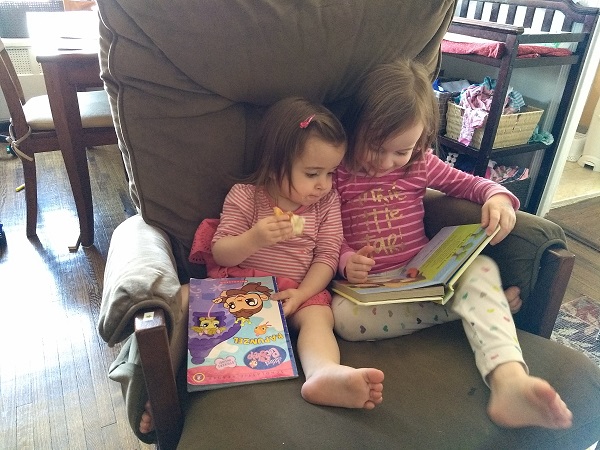 “Do you get bored with the work?” my son asked as I bustled around the kitchen, trying to get the kids through supper.

“What do you mean?” I responded. “Are you wondering if people ever get bored at their jobs?”

“You—do you ever get bored with all the work you do?” He waved his hands around the chaotic kitchen.

Hey, at least my five-year-old recognizes that momming is a full-time job. And here he was, pondering whether I get bored ploughing through all the tasks that mothering four young kids entails.

“Honestly, I’m too busy to get bored. Some parts of being a mom do seem repetitive or menial. But caring for you kids is never boring.”

“Mom—why aren’t you giving me watermelon?”

“Sorry, bud. I got delayed by a whole bunch of things that needed to happen first. It’d be faster if you just dished it up yourself,” which he was happy to do as I chopped the chicken.

Meanwhile, my daughter walked in with a picture she had colored. “This is what I dreamt about,” she said, holding up a rainbow creation that looked like it jumped off the pages of a Dr. Seuss book.

“Really? Last night I dreamt about cleaning out your closet,” I said. “That’s about as mundane as it gets, huh?”

What helps me in these moments is to reorient my perspective on motherhood. When raising kids veers off toward “monotonous mom duties” instead of “maternal bliss,” I take a moment to consciously choose to approach life with a joyful frame of mind.

For instance, a friend once taught me to put a positive spin on tedious laundry folding. As you pick up each piece of clothing, pray for the family member it belongs to or think about something you appreciate about them. This might be hard if all you can focus on is the tantrum your kid just dished out or the child who thinks biting her brother is acceptable. But give it a try; I’ve found that it’s hard to hold a grudge against someone you’re praying for. And with all that laundry, it’s a good chunk of time up for grabs.

In addition to keeping everyone clothed, momming means I spend ridiculous amounts of time cleaning up messes, juggling schedules, and preparing meals for a family of six. But just because managing my household is all-encompassing time-wise, it doesn’t mean that my mom job needs to be my source of worth.

Family—just like work, health, success, comfort, and approval—is innately good. But when we put any one of these on a pedestal, we elevate it to an unhealthy level, and life just gets out of whack. For me, it’s easy to idolize motherhood, especially on days when I let it define who I am. In those moments, the super-mom expectation is just waiting to crush me. And then I remember: Sometimes dinner just needs to be popcorn and peanut butter crackers.

When I treat motherhood as if it’s my be-all and end-all, I don’t flourish. I eventually hit a wall and burn out. Or, I get unnecessarily defensive; some comment from a passerby telling me to put on my baby’s hat will echo around in my head for hours. Instead, take a breath, say, “Thank you,” and move on.

The moments when motherhood seems most meaningful are when I take a step back from active mothering, such as:

Reflecting on this list, raising kids appears to be one of those vocations where your goal is to work yourself out of job. (College, here they come!) It’s when I loosen my grip on the reins that I can delight in my children’s developing independence, life skills, and character. By remembering now who I am as an individual and a wife (rather than just a mom), hopefully empty-nesting won’t be such a shock to the system and, instead, be the next wonderful phase in a full life.

So, I let my kids dish up their own watermelon (and struggle to put their shoes on, and dry themselves off after the bath, and sound out spelling words on their own . . .). It’s not being lazy; it’s investing in our future. And when I’m a grandma, I’ll be ready to dive back in like only a veteran mom can.

Kristin Van de Water is a former journalist and teacher who relies on humor, faith, and her mom crew to get her through the day. Raising four kids in a two-bedroom NYC apartment, Kristin is always on the lookout for life hacks to save time, space, money, and her sanity.