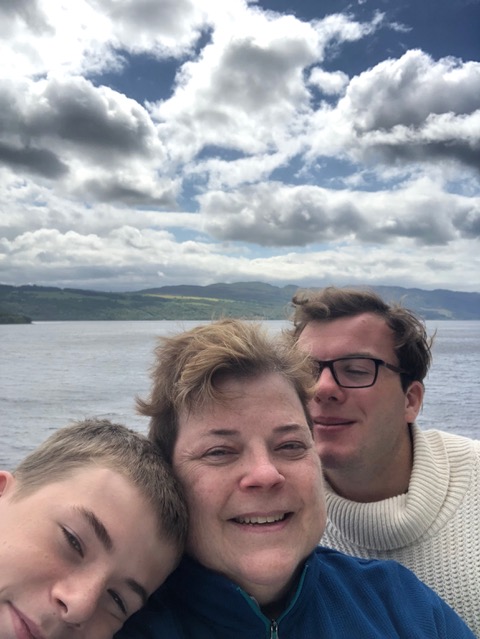 Telling children that a parent has cancer is one of the most difficult things a newly diagnosed parent must face. For starters, there’s no one or “right” way to have this conversation. Every family copes with life’s challenges uniquely. As a two-time cancer survivor, wife, and mom of three children, here are some of my thoughts about “telling the kids” based on my experiences.

At first blush, a parent’s instinct may be to avoid telling the children in order to protect them. When I was first diagnosed with breast cancer four years ago, my children were ages 19, 15, and 10, my husband and I decided that we would tell them when we had all of the relevant information—diagnosis, treatment plan, prognosis—so that we would be on the same page and could deal with the news together. It seemed like a logical plan at the time, but for various reasons, it didn’t work out as I’d hoped. In fact, my plan to share the information at one time made a difficult and stressful time much harder. Instead of trying to control the narrative, I should have shared the information, particularly with my teenage children, as I received it.

In addition, as a practical matter, it’s hard to keep cancer a secret. Children know when secrets are being kept. They’ll pick up on their parents’ worry, anxiety, and hushed voices and wonder what is being kept from them. Understandably then, kids might believe that whatever is happening is too awful to talk about, which in turn might make them feel isolated from the very people who are supposed to care for them.

Another problem with not telling children about a cancer diagnosis is that, if their parents don’t tell them, they’ll inevitably hear it elsewhere. A classmate or a neighbor might say something, not knowing that the news hasn’t been shared. Now, the children may find themselves in the bewildered space of not knowing what to believe and questioning whether they can trust their parents.

There’s no getting around it—children need to be told about a parent’s cancer diagnosis. However, before having these painful and hard conversations, take some time to plan what to say. Talk to a spouse, partner, therapist, or a health care professional. Consider writing down important points so you can pay attention to your children’s reactions. Be prepared for your children to ask whether you will die. It was the first question my younger son asked. In response, I explained that my cancer was caught early, that I would have surgery and chemotherapy to get better, and that I had great doctors taking care of me. Also, don’t be afraid of being emotional. It’s okay to cry together. It’s okay to admit that this is a frightening time, but reassure them that the family will get through it together.

How much information to share depends on the children’s ages. In general, children aged eight years or younger don’t need detailed information, while older children and teens will want to know more. However, according to the American Cancer Society, at a minimum, children should be told the following:

When naming the cancer, it may be helpful to use a doll, stuffed animal, book, or drawing to show or preschoolers and school-aged children where the cancer is. Young children are concrete thinkers so they likely will focus on the outside effects of the disease, such as hair loss or weight changes. Tell the children that they didn’t cause the parent’s cancer. Nothing they did or didn’t do caused their parent to get this disease—it’s not their fault. Parents should assure their children that cancer isn’t contagious and let them know that it’s okay to hug and show affection for each other.

Parents need to be honest about any changes that may happen to their children’s day-to-day lives. For example, children should be told that the parent might be away from home for several hours a day so that he or she can the treatment they need to get better. Family and friends may provide meals because the parent may be too tired to cook. Classmates’ or teammates’ parents may take children to and from school, sports, or other activities. Grandparents or other relatives or friends may stay with the children if the parent has to go to the hospital. The sick parent might need extra help with chores. By letting the children know this information upfront, the changes in their routines may be less upsetting.

Parents need to give their children time to absorb and process this news and therefore should be prepared to have more than one cancer conversation. Keep the lines of communication open and encourage children to ask questions and share their concerns. Try to have these conversations during a quiet time without interruptions so that the kids feel that they’re being heard. If parents don’t know the answer to their children’s questions, tell them that and follow-up later with an explanation.

And above all else, remind children that they are now and always loved. Cancer will never change that.

Christine Shields Corrigan, a two-time cancer survivor, wife, and mom, gives voice to the beautiful ordinary in her lyrical and practical essays. Her work about family, illness, writing, and resilient survivorship has appeared in a number of outlets.