Every spring, as winter’s chill dissipates and the days grow ever long, a fierce competitive spirit fills the LA air that can only mean one thing. School acceptance letters! (Uh…and baseball!) With the Dodgers’ opening day quickly rounding into home Friday, April 4th, you can practically smell the peanuts and Dodger Dogs wafting through the stands. To get your pint-sized sluggers psyched for what’s sure to be a World Series-winning season (Clayton Kershaw, are you listening?), head over to Dodger Stadium for a once-in-a-lifetime look behind the proverbial blue curtain. 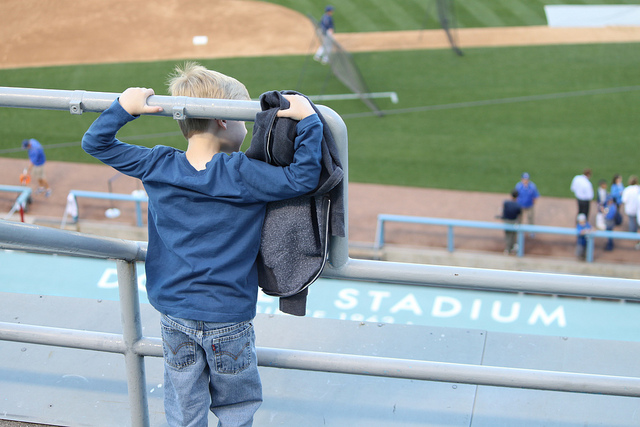 Behind the Blue Curtain
Daily stadium tours give mini mega fans an insider’s glimpse at the ballpark’s most restricted and non-public areas. But what’s most fascinating is the incredible history lesson you get not only about the iconic Dodgers’ organization, but also about the game of baseball itself.

Field of Dreams
Imagine soaking in the majesty of the third oldest ballpark in Major League Baseball without battling the beer-soaked crowds. Led by an uber-knowledgeable and infectiously enthusiastic member of the Dodger staff, the tour kicks off at Top Deck Level where you’ll enjoy stunning stadium views. A staff photographer is on hand throughout the tour, happily snapping photos of you and your tikes as you move about the ballpark. (Pics are available for purchase at the conclusion of the tour for around $10 a pop.) Of course, you’re also more than welcome to bring your own camera instead and Instagram every single second for free. 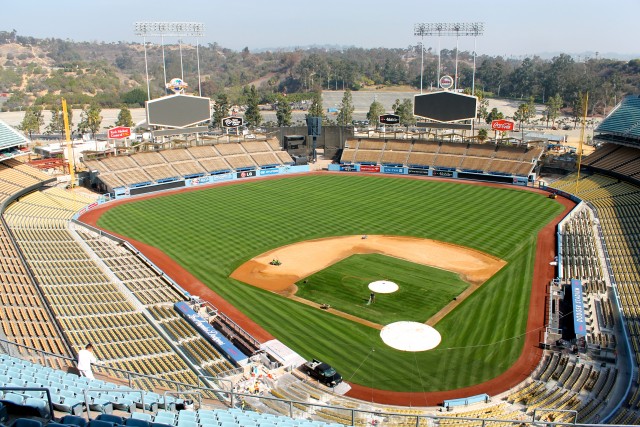 Vin Scully Press Box
During the tour, fans gain access to the Vin Scully Press Box where the Dodger action is covered from every angle. Anyone who’s ever watched or listened to a Dodger game will tell you legendary broadcaster, Vin Scully, is as integral to the team as any player on the field. With his unique gift for insightful and compelling commentary,  Scully effortlessly humanizes players beyond the flash and big salaries, and oozes a pure childlike passion for the sport. At 85 years young, he returns to the press box once more this season for a record 65th year doing play-by-play.

Also in the press box, fans see where talented organist, Nancy Bea Hefley, has gleefully played “Take Me Out to the Ball Game” during the seventh inning stretch since 1988. Sadly, with Major League ballparks phasing out live organ music in favor of DJ’s and canned Bieber jamz, Nancy’s continued contribution to the game is pretty darn special. 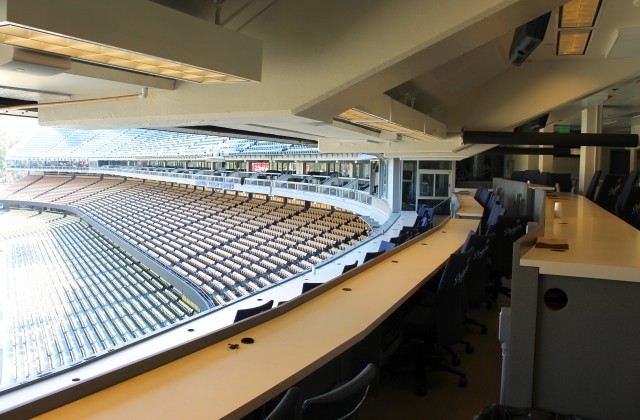 “Winning!”
You may never get closer to baseball greatness than this unless, of course, you’re hiding under Yasiel Puig’s bed. Fans get an up-close and personal look at the myriad accolades the Dodgers organization has garnered over the years, including six World Series titles and numerous Most Valuable Player (MVP) Awards. We think there’s more than enough room in that case for another Commissioner’s Trophy this season, no? Just sayin’. 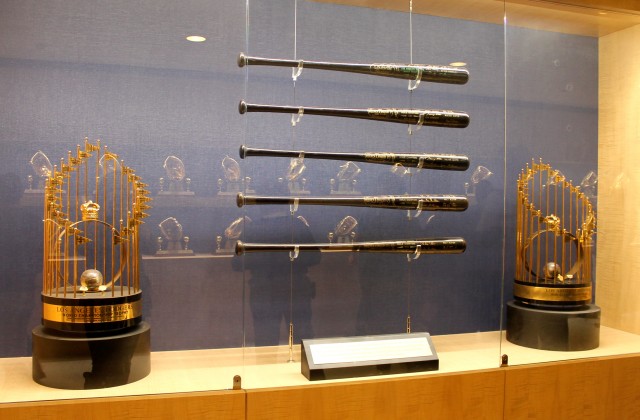 Hall of Fame
In addition to the Lexus Dugout Club and VIP lounge and restaurant where celebs hangout behind home plate (we hear Conan O’Brien is a regular), fans may also get a revealing glimpse inside the visiting team’s locker room, the general manager’s extensive bobble head collection, Dodger weight room and indoor batting cages depending on availability the day of the tour. But absolutely nothing, nada, niente, zip, zilch is cooler than seeing Jackie Robinson’s retired jersey in the Dodger hall of fame. Along with #42, game-changing legends like Tommy Lasorda, Sandy Coufax and Pee Wee Reese are featured, too. 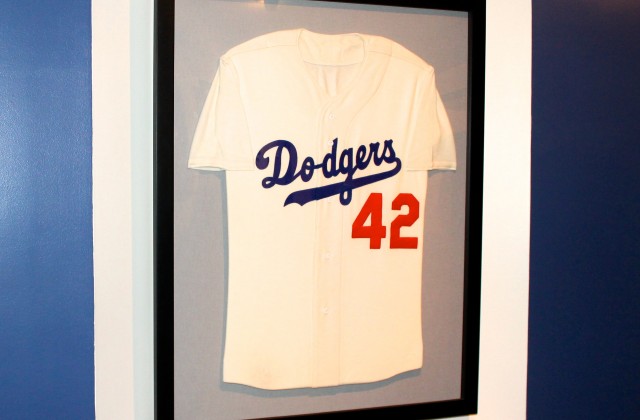 Batter Up!
Now, let’s face it. This is the moment kiddos (and admittedly, we adults) have giddily been waiting for all tour long – a chance to actually sit in the Dodgers dugout and take the field. As you slowly ascend the stairs and the grandeur of the surrounding stands becomes visible, you practically hear the theme from “The Natural” begin to play. Fans get a good 10 minutes or so to poke around, pretend chat on the dugout phone and take plenty of photos that will inevitably end up on every family’s Christmas card. 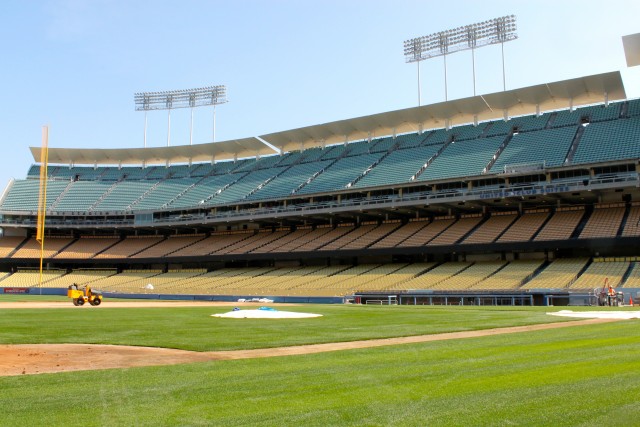 It’s Not Enough to Be Nominated
At the tour’s conclusion, you and your tots are treated to a look at the Jackie Robinson Rookie of the Year Awards and Cy Young Awards. Pint-sized pitchers will most definitely want a pic next to Clayton Kershaw’s Cy Young bling. After all, they too could be on this wall someday. 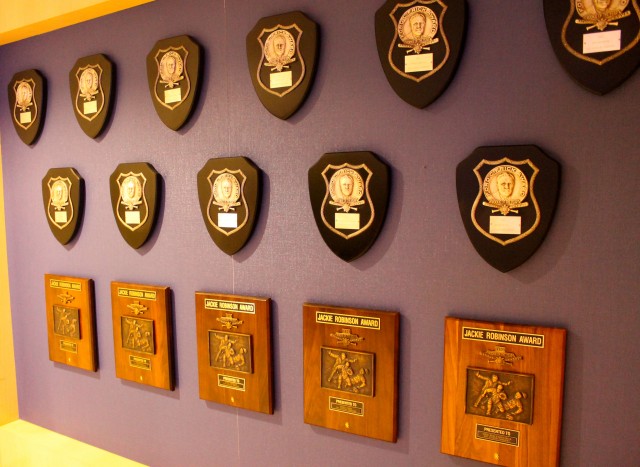 Good to Know: The entire tour is stroller accessible, so feel free to bring your littlest little-leaguers along for the fun.

Parking: Parking is conveniently located in Lot P, right outside the Top of the Park store. Dodger onesies and mini bats anyone?

Insider Tip: Still need more time on the field? At every Sun. home game, kids can run the bases after the game!