You won’t have to dig too hard to find Jurassic sized fun for your little dino lovers all over Los Angeles. With two new exhibits this summer, in addition to some old faves, you can hunt for fossils, ride a T-Rex and find dinosaurs at playgrounds, museums and even the zoo. 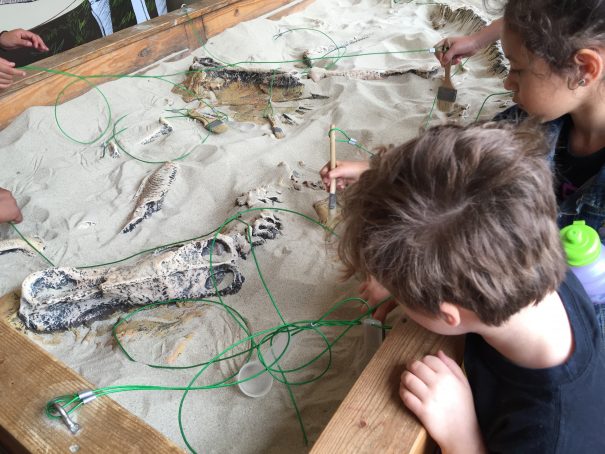 Natural History Museum
Every dedicated dino expert knows that the Natural History Museum Great Hall of Dinosaurs is the place to visit to dig up all of the facts on these prehistoric wonders. The 14,000 square foot renovated Dinosaur Hall at the NHM brings paleontology alive by displaying completed skeletons and fossils of dinosaurs from all over the world, representing each period of dinosaur life. When you’re done studying up on the life cycle of the T-Rex, take your super-silly-sauruses to Level 2 where they can watch real life paleontologists prepare actual fossils in the Dino Lab. If interactive is more your thing, check out the Dinosaur Encounter show (times vary; this summer you can catch it Thursday, Saturday & Sunday several times a day) that uses large-scale puppets to bring the T-Rex and Triceratops to life, capturing the imagination of any die-hard dino-fan. All of these dino-tastic attractions are part of the permanent exhibits at NHM and included in admission.

But wait, there’s more!  Starting July 3, your kiddos curiosities will soar upon meeting the incredibly diverse winged reptiles of the Pterosaurs: Flight in the Age of Dinosaurs exhibit. This prehistoric attraction will be visiting NHM until October 2, 2016 and will include rare fossils from all over the world in addition to life-size models, videos and interactive exhibits of the earth’s first flighted bird. Tickets to the NHM are $12 for adults and $5 for kids over 2. To visit the temporary Pterosaurs exhibit with a timed ticket entrance, expect to spend a little bit more with a $22/adult, $10/child ticket that covers both the Pterosaurs and general Museum entrance. Make sure to check the website before visiting for information on parking, which can be tricky on USC football game days. 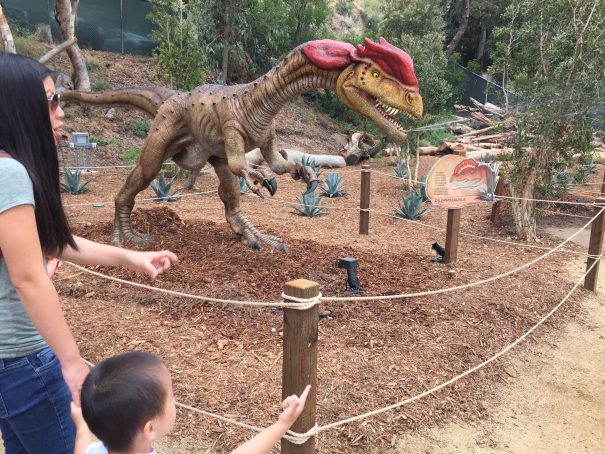 Dinosaurs: Unextinct at the LA Zoo
Lions, tigers and dinosaurs? Oh my! Go back in time with the LA Zoo to a lost world when dinosaurs roamed the earth. For the price of Zoo admission ($15-$20) plus an additional $5 a person you can visit “Unextinct at the LA Zoo.”  This Dino event brings animatronic dinosaurs to life, displaying them in their natural habitat among a lush landscape of the earliest trees and plants. Stand in awe in the middle of these life-sized replicas of an array of dinosaurs, ranging in heights up to almost 22 feet and 6,700 pounds!

If the awe inspiring size of these giganto-sauruses isn’t enough for your super dino fans, the exhibit also offers a Fossil Dig where they can brush away sand to uncover “bones” made from a fiberglass mold of an actual dinosaur fossil. Get your cameras ready for the many Jurassic-sized photo ops and try your hand at walking the dinosaur with the Stegosaurus robot that you can control. Make sure to download the free “Dinosaurs: Alive at the LA Zoo” augmented reality app and complete the quiz to win a prize at the Dino gift shop. Don’t wait too long to partake in this colossal adventure; the Stone Age scene is extinct as of November 1. 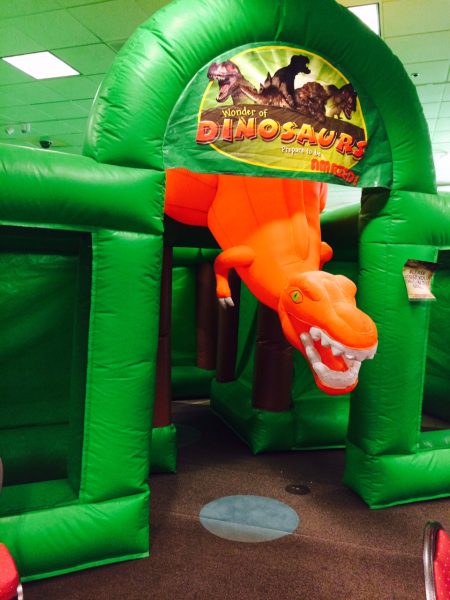 Wonder of Dinosaurs
Sure you can study them and dig for them, but what if you just want to play?  You can play in and with the dinosaurs at this Redondo Beach self-guided exhibit that combines animatronic dinosaurs with inflatable bouncers, mazes, mini-golf and more. For the next 2 years, you can visit this family friendly exhibit within the South Bay Galleria. Also available for parties, this wonder-filled exhibit even has robotic dinosaur rides. Appropriate for ages 2 & up, your pack will enjoy watching the moving and static dinosaurs as well as getting out their own roars and giggles in the inflatable dino-themed bouncers (don’t forget those socks). There’s even prehistoric fun to be had by mom and dad in the inflatable dino maze and mini-golf game.

Most activities are included in admission prices ($8-$16) but face painting, dino photo-op and fossil and gem bags cost extra. Only infant strollers are allowed on the floor and all other strollers can be parked in designated areas. If you’re planning to visit this lost world of fun, please note that prices are slightly higher on weekends. All kids permanently dependent on wheelchairs are admitted for free and Wonder of Dinosaurs donates part of proceeds to a California charity dedicated to the needs of disabled children. 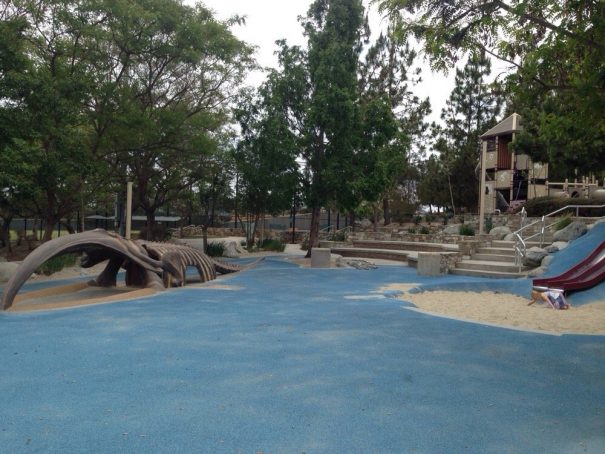 Fossil Reef Park
Sometimes you just want to play and play and play.  A weekend jaunt to Laguna is as good as a trip back in time. Jurassic imaginations will be sparked with endless inspiration at this Laguna Hills Prehistoric Playground. Fossil Reef Park is a paleo-adventure playground that reflects the historical significance of the area. Your junior dino-digger will be enthralled with the playground bridge that has imprints of actual fossils over 15 million years old. Under the bridge, a replica of a Hadrosaur fossil is embedded into the bridge wall, along with fossil pieces of a saber toothed cat, duck-billed dinosaur and mammoths. With a bowhead whale skeleton to climb and two separate play structures to explore, Fossil Reef Park is guaranteed to keep your tiny T-Rex busy. This multi-level playground can make it difficult to keep track of the youngest of your crew on a busy day but there is a separate toddler area within the playground and lots of green for running and picnicking. If your toddler tires when walking on those little legs, pack the stroller for this adventure as the parking can be a bit far.

Then when they’re all tuckered out, you get to enjoy exploring and eating in beautiful Laguna Beach. 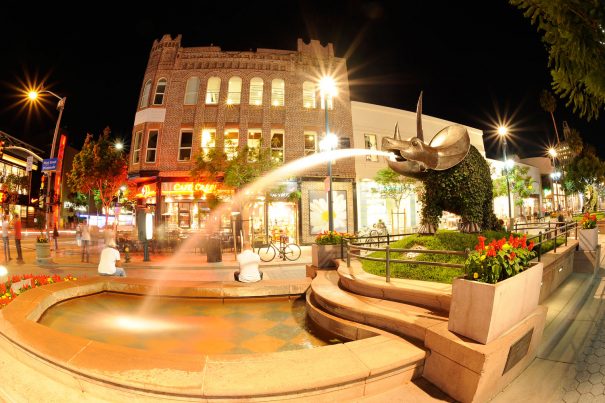 The “Dinosaurs of Santa Monica”
If you want to stay closer to home and get a glimpse of the dinos in their natural habitat (shopping?), play a casual game of “eye spy a dinosaur” with your pint-size paleontologists as you walk the streets of Santa Monica. A free public art display at the 3rd Street Promenade, the “Dinosaurs of Santa Monica” are made up of six stainless steel and copper topiary fountains that bring a prehistoric charm to the modern day restaurants and shops. Look for these prehistoric finds on Third Street between Broadway Avenue and Wilshire Blvd. It’s a fun side adventure after a day at the beach, a shopping or movie outing on the Promenade or as part of a train trip to the sea. 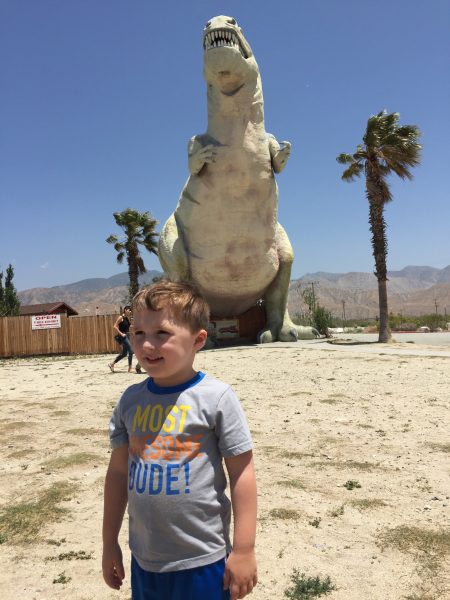 Cabazon Dinosaurs
Next time you head to the desert, you definitely need to stop and meet these guys. (You may recognize the famous dinosaurs from Pee Wee’s Big Adventure.) The Cabazon Dinosaurs have been a staple along I-10 since the early 1960’s when Dinny (pronounced Dine-y), the 150 ft. long Apatosaurus, was built to attract patrons to the now permanently closed Wheel Restaurant. In 1981 Mr. Rex, the 3 story T-Rex, joined him. Visitors are free to climb atop Dinny to a cute, kitschy gift shop but to get inside the mouth of the towering T-Rex you have to enter through the museum side which has an admission fee: $10 for adults and $9 for kids ages 3 & up. 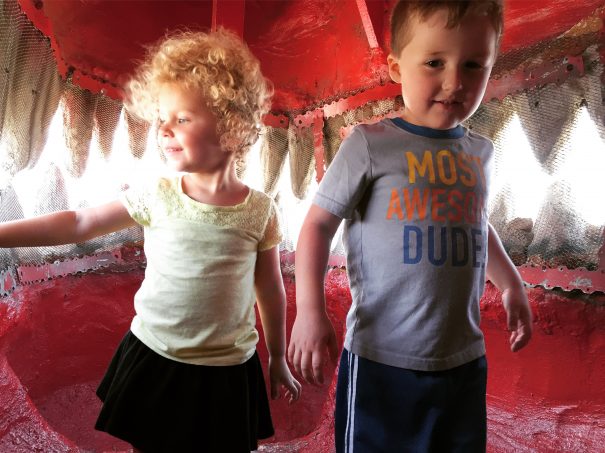 When you’re done snapping pics atop Mr. Rex’s big toes, follow the signs behind the giant dinos to the Creationist Museum in the back where dinosaurs and wild animals cohabit peacefully among desert plants. This museum boasts a couple of animatronic rides with gentle movements for timid tots, but at $2 a ride in addition to the admission fee, you may want to proceed straight through to the “fossil dig” sand pit and “gem stone” panning activity which are included with admission. Strollers are welcomed on the dino paths but be aware of the lack of shade and sandy trails.

What are the dinosaur attractions that make your little ones ROAR? Share with us in the comments!