Just when we thought Grand Park couldn’t possibly get any better, they opened a whimsical new playground that looks as though it was plucked right out of a Dr. Seuss book. For families who already adore the Grand Park’s crazy popular “splash pad” at the historic fountain, this magical play space is giving us one more reason to fall in love with downtown all over again. 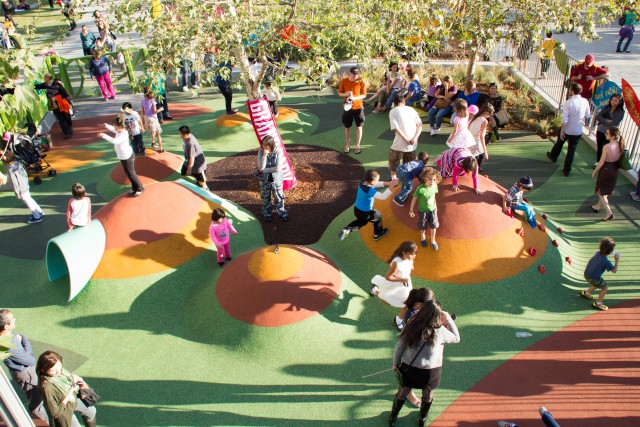 You’ll find the playground at the southeast end of Grand Park between Broadway and Spring Streets.  The new million dollar playground encourages pint-sized Angelenos to romp, explore and use their vivid imaginations to create fantastical adventures.

Rios Clementi Hale Studios (the original architect of Grand Park) designed the space to be truly one-of-a-kind, like nothing else you can find in the city. And it is.  Among the many highlights your wiggle worms can expect to enjoy are a custom 20 ft. high treehouse with a tall roller slide and a 12 ft. tube slide, along with three tiers of platforms tucked inside the climber. The soaring tower gives tots a realistic sense of what it’s like to climb a tree. With loads of ways for little ones to peer out, the treehouse offers a “kids-eye-view” of the sprawling park and breathtaking cityscape. 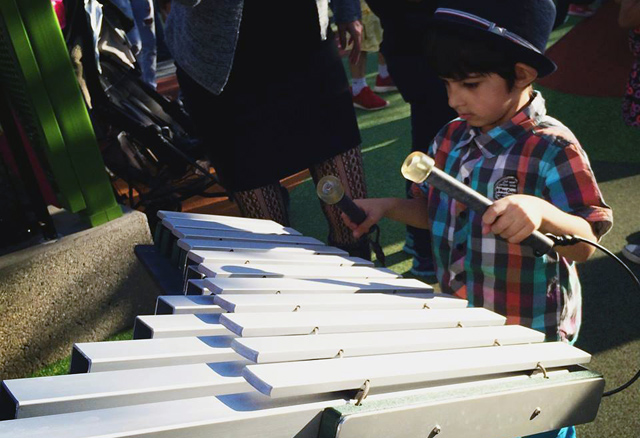 The floor of the playground is a super soft surface that resembles a forest floor with gigantic leaf shapes in colors inspired by nature. It also includes seven berms that range from 1ft. to 4 ft. tall with some featuring groovy extras like rock-climbing handles, a rope climber and tunnel that babes can scamper through. Down the road, outdoor musical instruments will be added to the area so little ones can create some jamz of their own while they play. (Your neighbors at home thank you for that.) 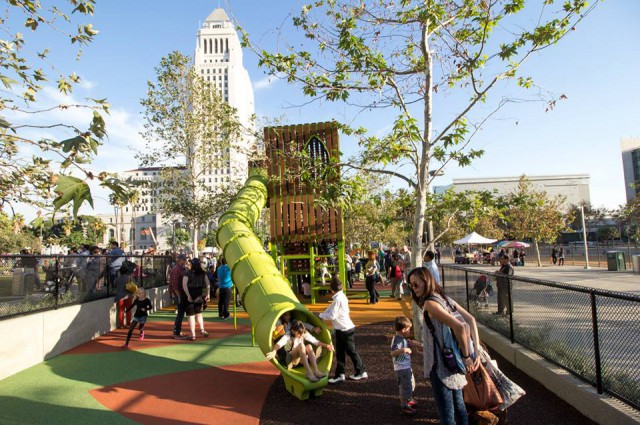 Gorgeous sycamore trees have also been placed around the playground and will ultimately grow together to create a continuous shade canopy – something LA parents will no doubt appreciate, during toasty summer months. Big leaves posted along the fence surrounding the playground feature the words “Let’s Play” translated into 24 of the languages you can hear in Los Angeles County. Just in case you needed a reminder or what an awesome and diverse city we live in.

Additionally, the playground (like the rest of Grand Park) is totally ADA accessible encouraging kiddos of all abilities to get out and join in the fun.

Parking: While guests are welcome to park in Lot 10 on N. Broadway between First Street and Temple, we strongly encourage families to take the Metro Red/Purple Line to the Civic Center/Grand Park stop. It’s tons easier & cheaper (parking is $3/15 minutes or $10 on weekends and $20 on weekdays- ouch!) and gives rugrats a thrill. 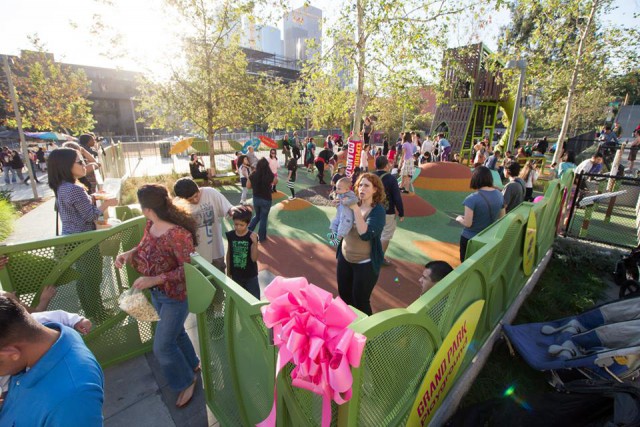 What truly unique playgrounds have you discovered in your hood? We’re always on the lookout for special new spots to uncover and share. Give us a shout in the comments section.