Universal Studios Hollywood brings the magic of Hollywood’s past and present to life through their world-famous studio tour, theme park attractions and the unforgettable Wizarding World of Harry Potter. 2019 promises to bring even more to “The Entertainment Capital of LA” and we’ve got the inside scoop! Read on to learn what’s on the horizon for Universal in 2019 and plan your family getaway pronto! 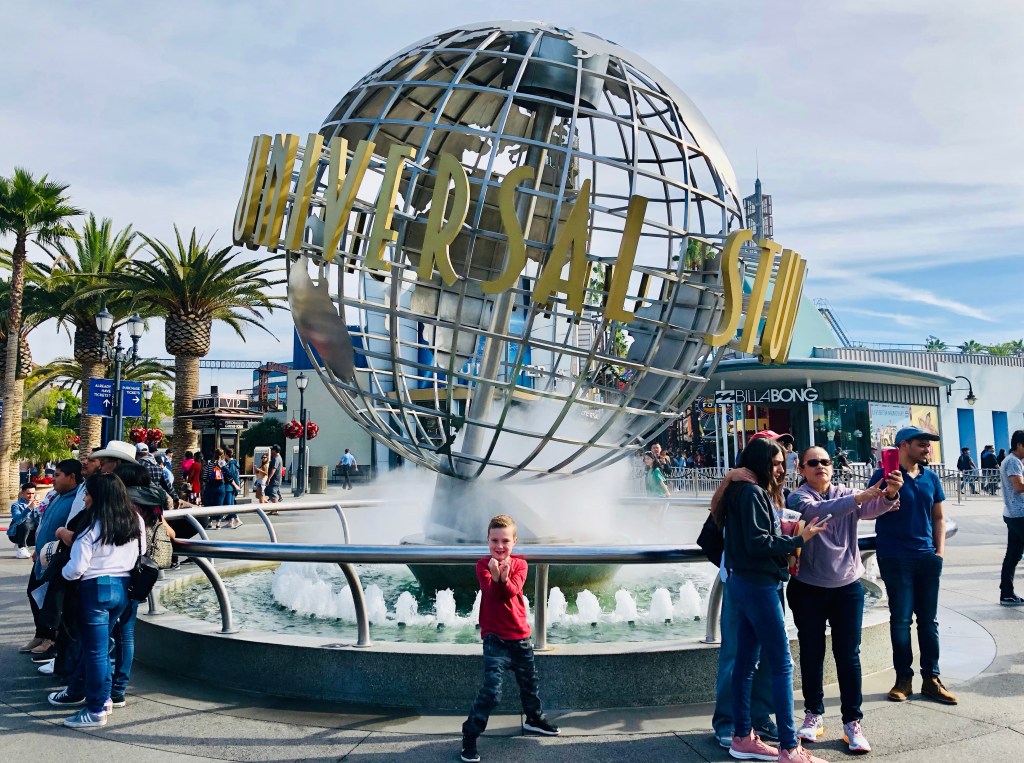 Running Universal: Lace up those sneakers and get ready as Universal is off to the races! The inaugural Minion Run hits the pavement on May 11, 2019 and will feature Illumination’s mischievous Minions from the popular “Despicable Me Minion Mayhem” ride. Participants ages five and older are invited to wind their way around Universal Studios Hollywood and through parts of Universal Studios’ historic backlot, made famous in more than 8,000 movies and television shows. Runners of all experience levels are welcome and race registration includes a swag bag and specially-priced theme park tickets. 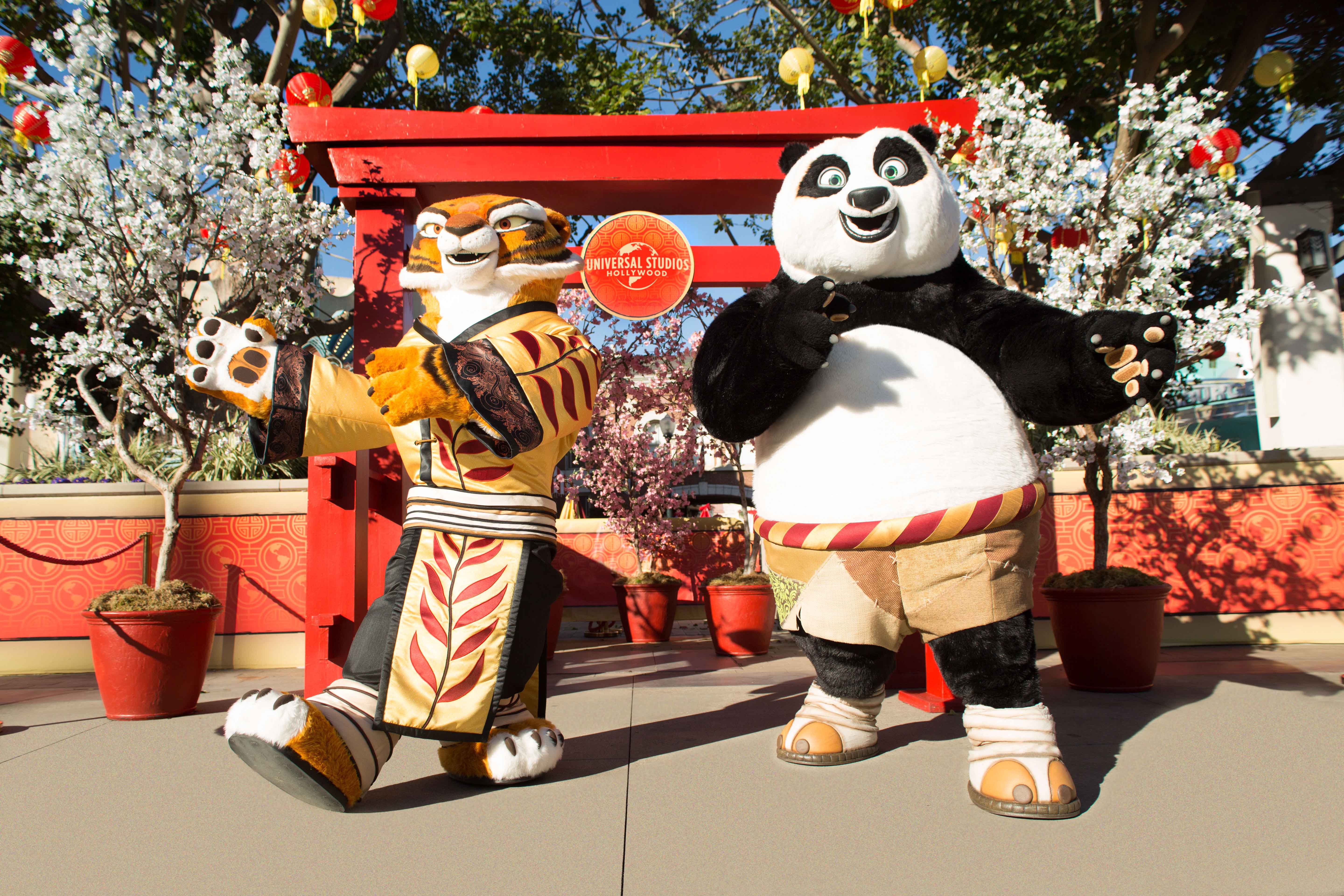 Lunar New Year Celebration: Welcome the Year of the Pig at Universal Studios Hollywood during the month of February. Universal Plaza in the heart of the theme park will be festooned with customary red Chinese lanterns and stunning plum blossom Wishing Trees to set the stage. The festivities will come to life as guests discover the 12 zodiac animal signs accompanied by their symbolic attributes. 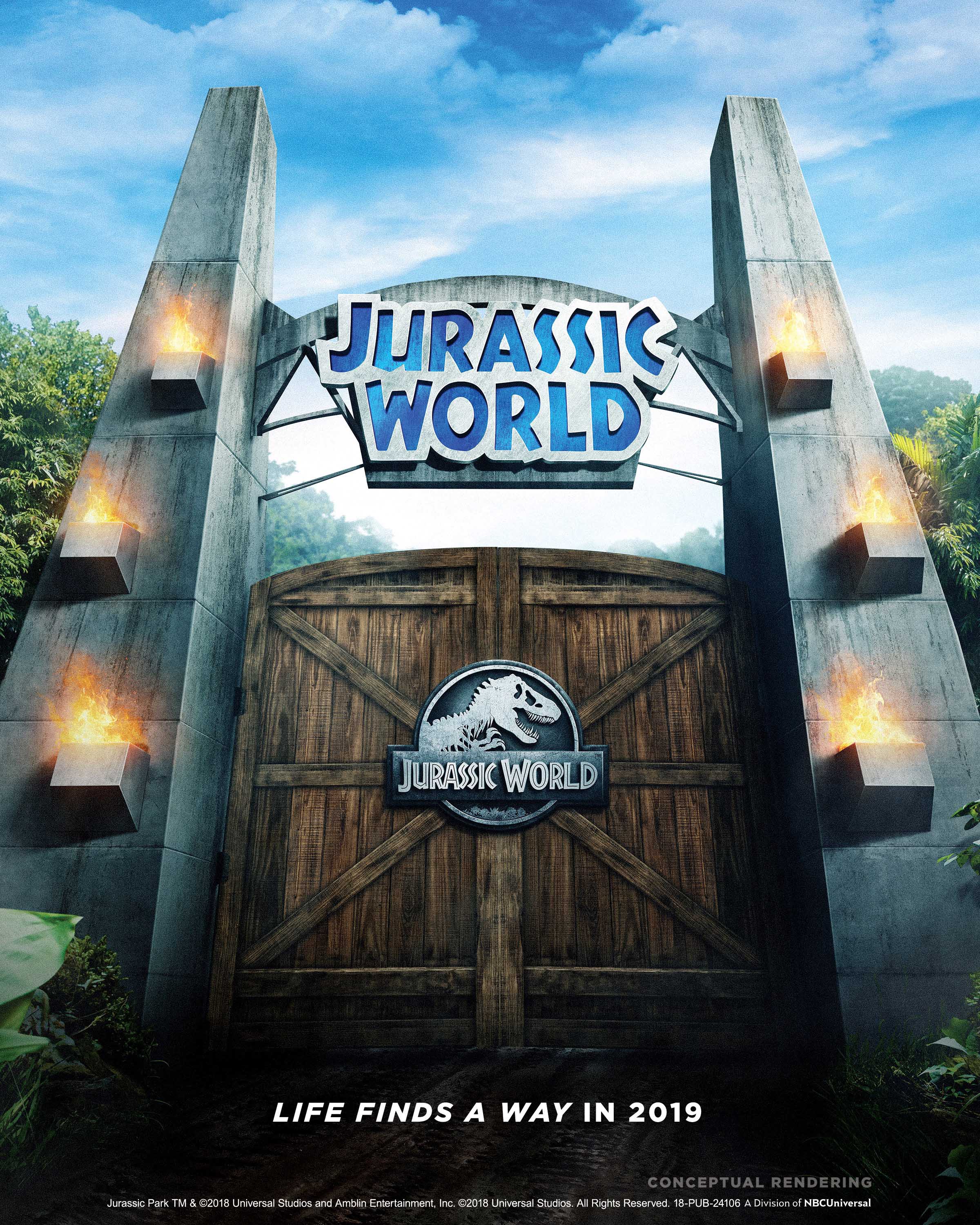 Jurassic World Ride: In 2019, colossal, dimensional dinosaurs will once again roam the Earth and astound guests when Universal Studios Hollywood debuts an all-new technologically-advanced epic adventure inspired by Universal Pictures’ blockbuster film franchise. Drawing from the favorite elements of the original “Jurassic Park—The Ride,” this next-generation thrill ride will be a fully reimagined iteration of the ground-breaking adventure. With the introduction of never-before-seen dinosaurs, enhanced storytelling, lush scenic design, an entirely new color scheme and uncompromised state-of the art technology, the ride will capture elements never experienced within a theme park. 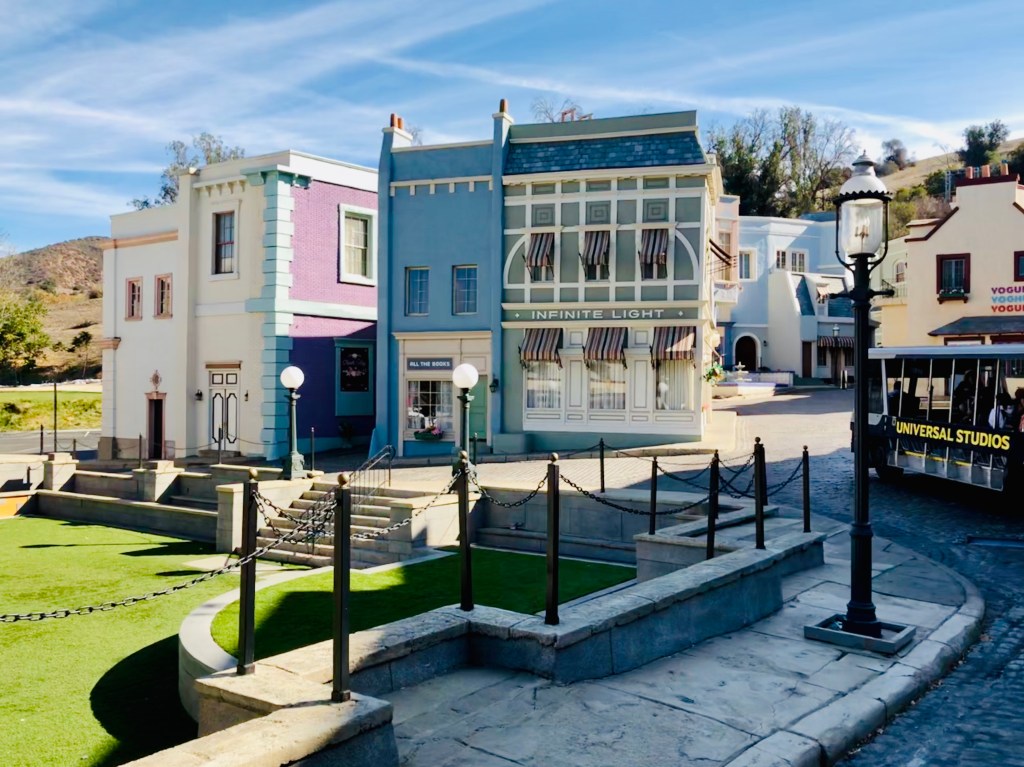 Studio Tour Tram Ride: The hour-long studio tour tram offers future filmmakers and mini movie moguls an incredible behind the scenes peek at how movies and television shows are made. Guests visit working soundstages, backlot sets, movie facades and recreated streets of the world, as well as a plethora of attractions showcasing amazing special effects that’ll blow your mind.

Tour Highlights: Back to the Future fans will love seeing the world-famous Hill Valley Courthouse Square where Marty zoomed away in Doc’s DeLorean. Look out for New York City streets, a simulated flash flood in a Mexican Village, the 747 jetliner crash site from War of the Worlds, a visit from Jaws himself at Jaws Lake, the Whoville set from Dr. Seuss’s The Grinch Who Stole Christmas, original sets from Jurassic Park: The Lost World and of course the infamous Bates Motel and house from Psycho.

Special Effects: Special effects rule this ride as guests experience “Earthquake—The Big One” (a fully-dressed movie set that simulates the devastation of an 8.3 earthquake in a subway station). Kids will also lose their shizzle over “King-Kong 360 3D” which is a one-of-a-kind experience by director Peter Jackson that throws guests in the middle of a jungle battle between 25’ tall King Kong and a 35’ tall voracious dinosaur. The tour’s grand finale treats families to Fast & Furious —Supercharged—an adrenaline-fueled 3D-HD thrill ride inspired by the studio’s most successful movie franchise of all time. Visitors are swept into the high-stakes underground world of fast cars and heart-pounding escapades as they travel at accelerated speeds of up to 120 mph through the streets of LA. 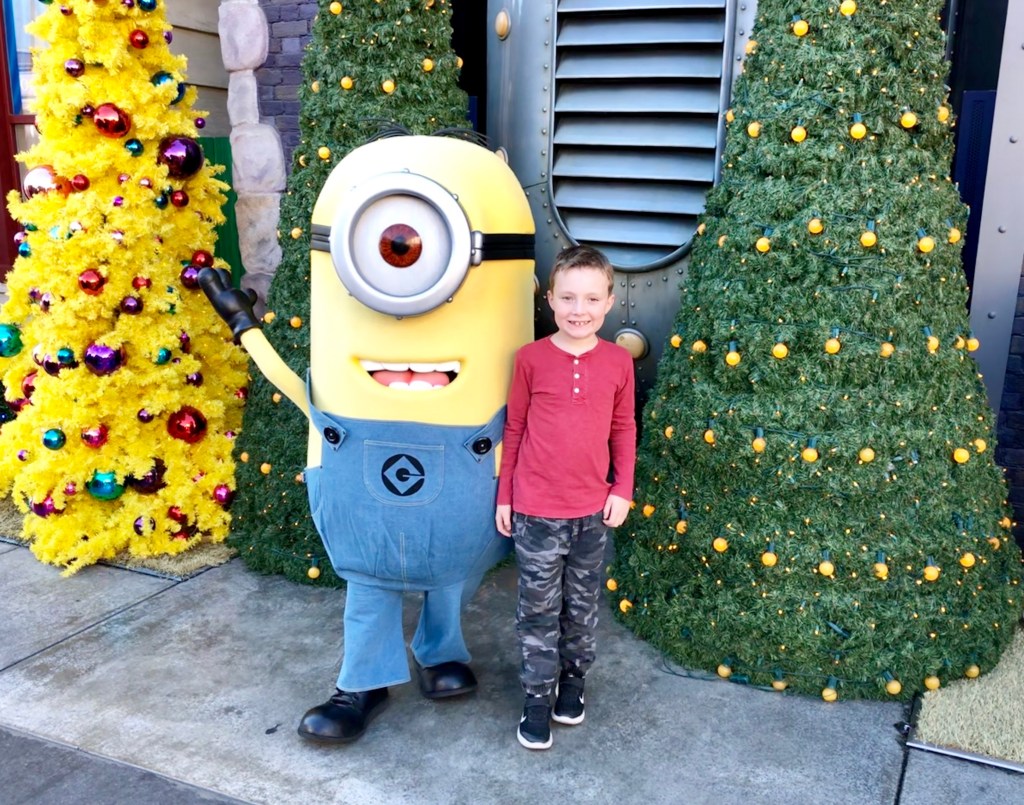 Despicable Me: Despicable Me and minions fans will adore the “Despicable Me Minion Mayhem” 3D-Ultra HD ride and “Super Silly Fun Land” which is an interactive play zone where kids can work off some extra energy climbing on the play structure, frolicking in an elaborate water play area and riding the “Silly Swirly Fun Ride” that soars over a fictional seaside carnival below. Minion tees, stuffies and other knick-knacks are available at shops around the area too if you need to stock up. 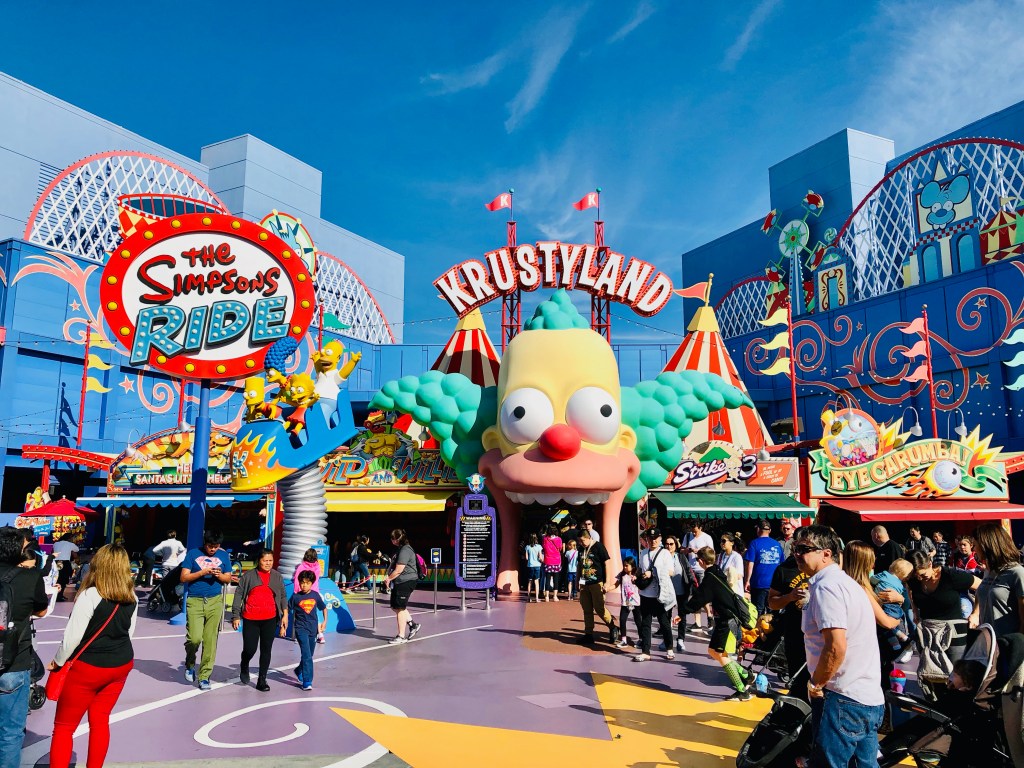 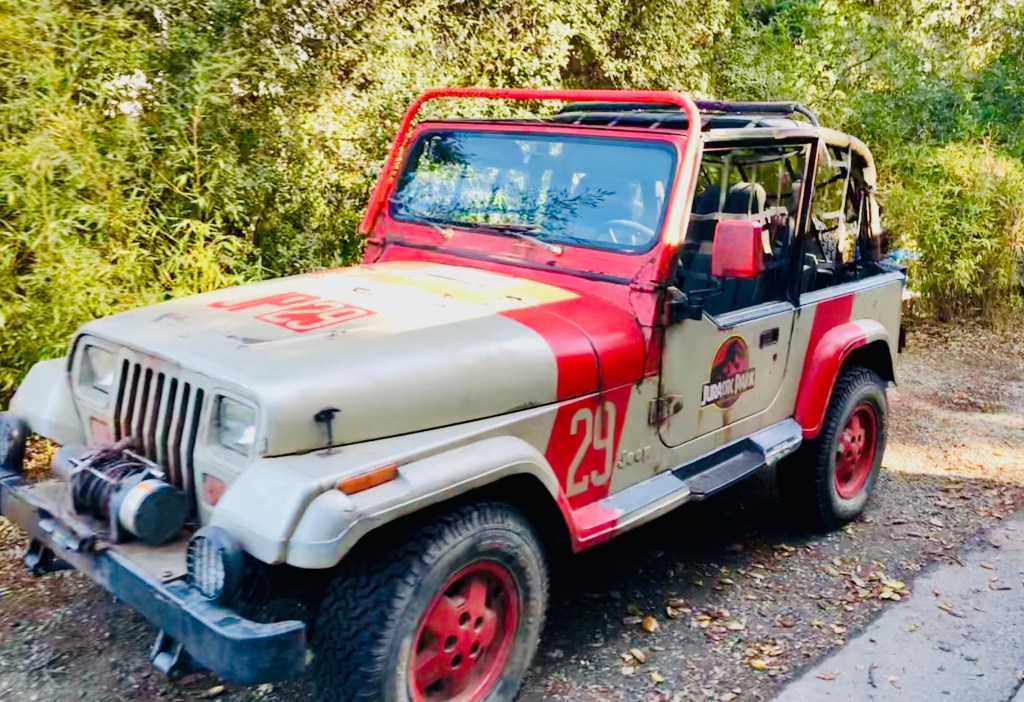 Other Amazing Attractions
Other notables for little ones in this part of the park include totally immersive attractions like DreamWorks Theatre featuring Kung Fu Panda: The Emperor’s Quest, Revenge of the Mummy—The Ride and Transformers The Ride—3D. 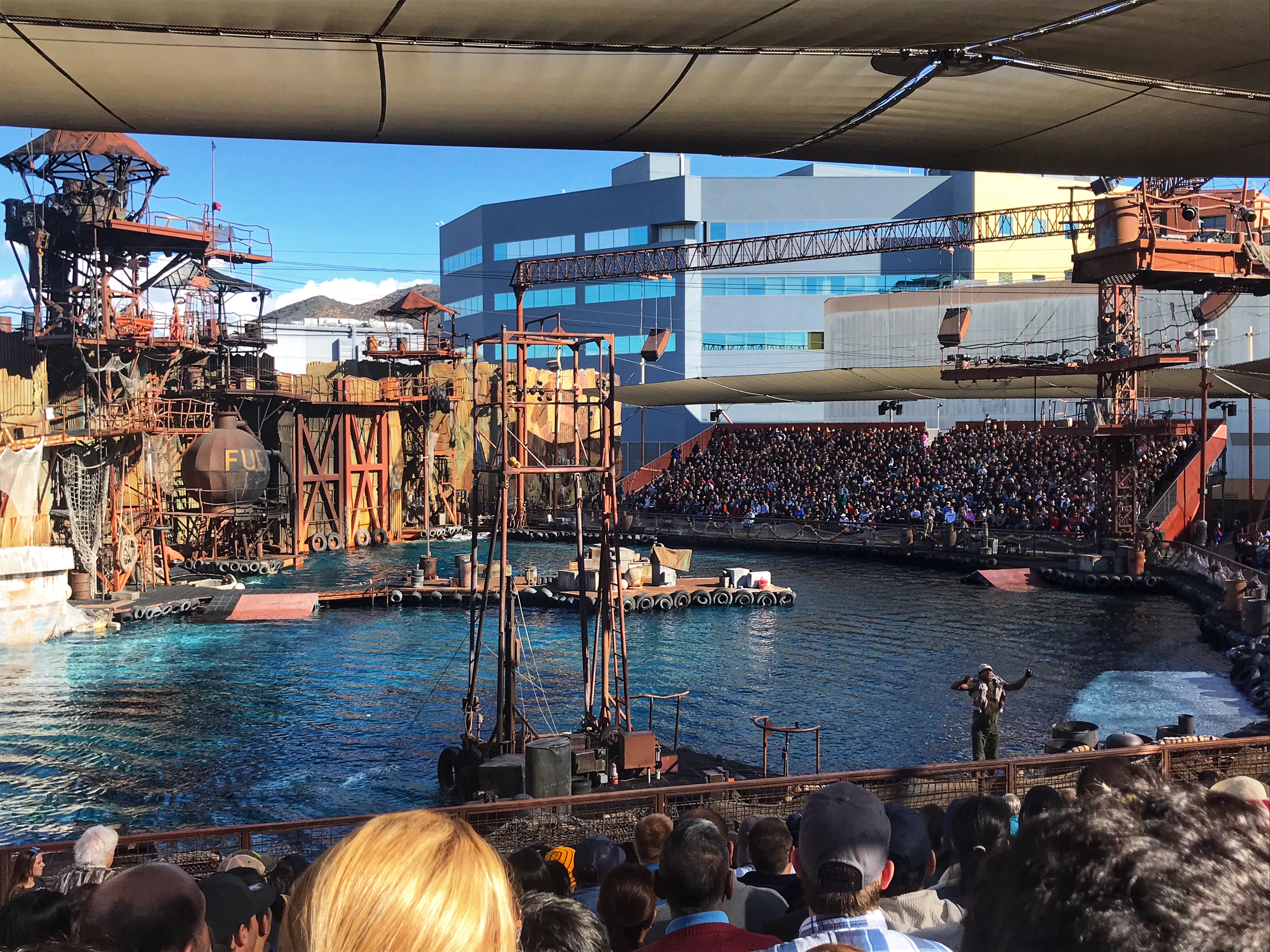 Don’t Forget the Shows
Universal Studios’s dazzling shows should also be high on your list of must-sees (and offer a much-needed chance to sit) with productions like the “Special Effects Show” that provides a behind the scenes look at the industry’s coolest movie-making illusions, the “Universal’s Animal Actors” show that reveals how film’s most lovable pets light up the screen and of course the “WaterWorld—A Live Sea War Spectacular” which showcases the most complex combination of high-tech special effects, pyrotechnics, flame and human stunt work ever attempted anywhere in the world. 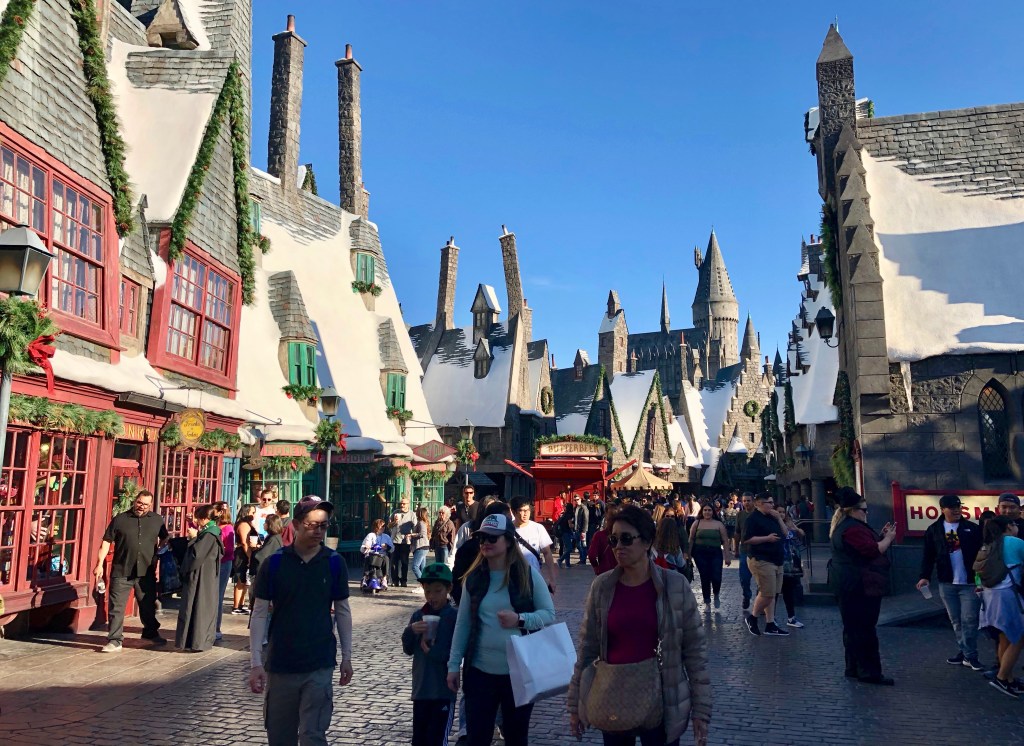 Wizarding World of Harry Potter: With a breathtaking view of Hogwarts castle looming over the snow-capped roofs and cobblestone streets of Hogsmeade, families are magically transported into the Wizarding World of Harry Potter. Aspiring wizards and muggles alike will appreciate the great attention to detail at every turn, mirroring the books and movies to a tee. Upon entering, be sure to stop by the Hogwarts Express for a fab family photo op with the conductor.

If thrill-seeking is more your jam, make a beeline for Universal Studios’s first outdoor roller coaster, the “Flight of the Hippogriff,” as well as the park’s signature ride, “Harry Potter and the Forbidden Journey.” After you’ve worked up an appetite, be sure to check out Three Broomsticks for delicious British-inspired fare like fish and chips, Shepherd’s Pie and Butterbeer ice cream. Speaking of Butterbeer, there are plenty of places to get your fix—from the Butterbeer carts to the Hogs Head Pub. Depending where you go, you can get it cold, frozen and piping hot!

Pro tip: On crowded days we recommend heading straight to this area at rope drop as the crowds will only get larger as the day goes on. Download the Universal Studios Hollywood app to see wait times and plan your day at the park. 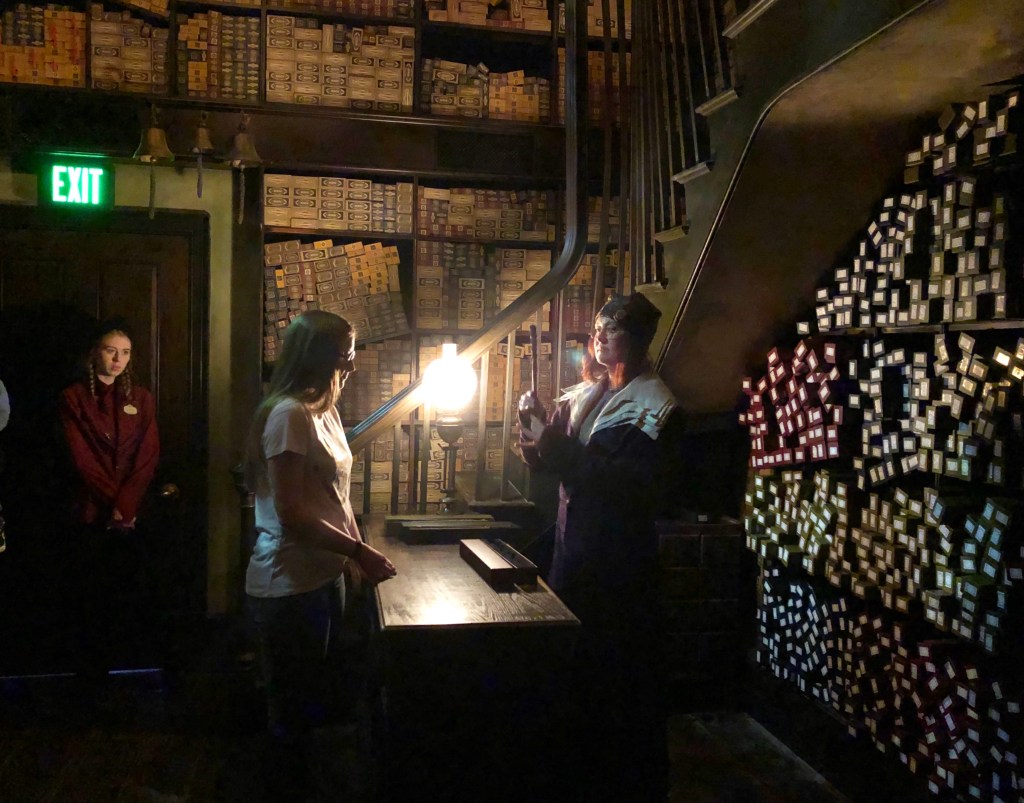 Wizard Wands & Wears: After your meal, grab your broomstick and sail over to Ollivander’s, Makers of Fine Wands Since 382 BC where you can watch a wand choosing ceremony and find a wand of your very own. The shop features film character wands replicas, as well as custom wands just for you. Wands also include a map to 15 special locations throughout Hogsmeade where aspiring wizards are encouraged to practice their magic. Wave your wand to perform the Incendio fire-making spell that conjures flames of varying size based on skill level or the Alohomora spell which unlocks a series of intricate locks revealing the fiery breath of a creature hidden behind a secret door. There are also several shops throughout Hogsmeade to stock up on sweet treats and novelties, as well as robes, scarves, neckties and holiday ornaments from your favorite houses. 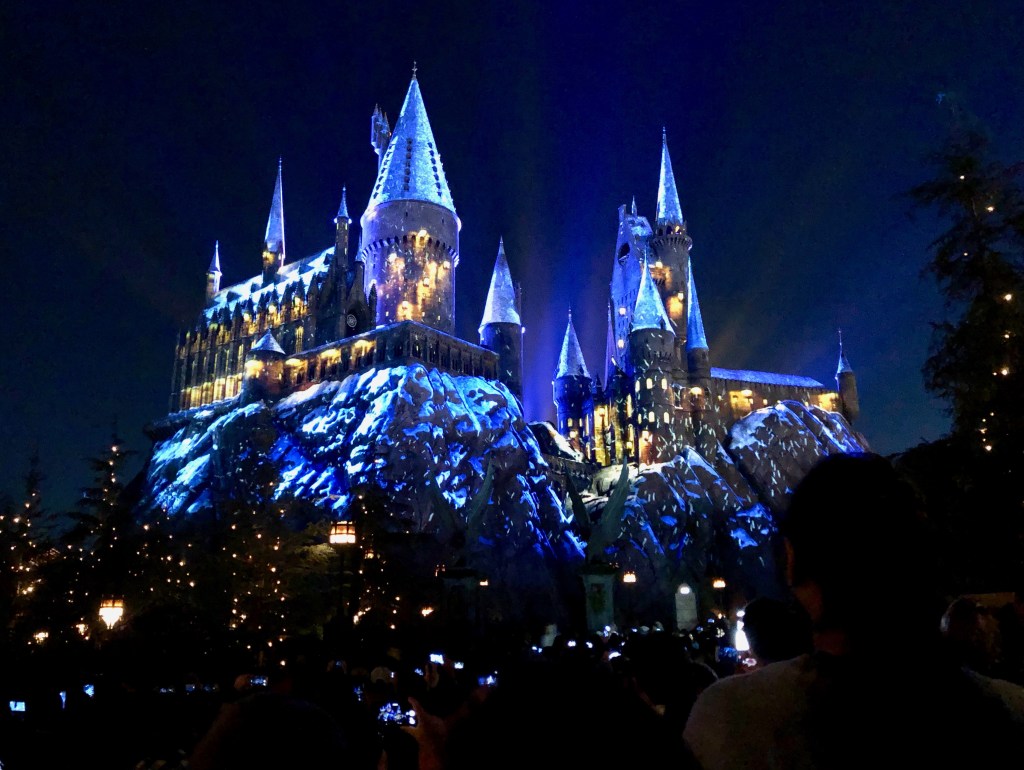 The Nighttime Lights at Hogwarts Castle: The holiday season brings “The Magic of Christmas at Hogwarts Castle” light show and during the summer months you can see “The Nighttime Lights at Hogwarts Castle,” a seasonal light display that runs on various dates and times. Check the park app for show times and plan to arrive at the Castle well before the show starts or you may be stuck outside of the Hogsmeade entrance. This nightly display of dazzling wonder illuminates Hogwarts with colorful imagery and impressive animations dancing across the castle in tandem to music from the Harry Potter movies.

Pro Tip: If you can swing the extra dough for a Universal Studios Express Pass, we highly recommend it. The cost pays off by letting your family move to the front of the line on attractions and rides—saving you tons of time (and tantrums), especially on busy days. 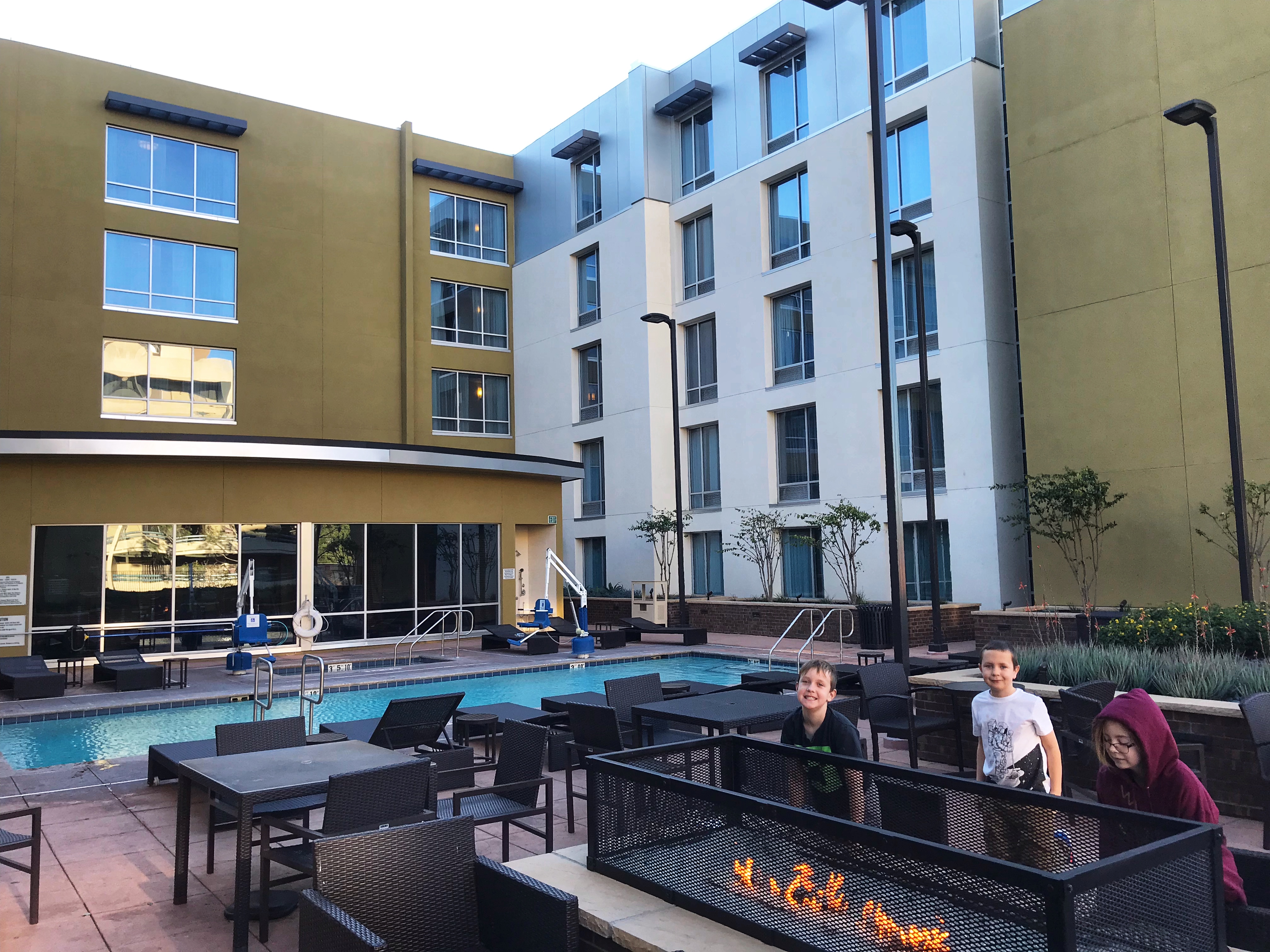 Make It a Staycation

Whether you are visiting Universal Studios Hollywood from the Bay Area or you are a local looking for a little time by the hotel pool, the Hilton Garden Inn Burbank Downtown is just the relaxing spot that you need to camp out with the kids. Away from much of the hustle and bustle of the city, the hotel is just 15 minutes to Universal Studios Hollywood. With a fantastic hot buffet breakfast served right off the hotel lobby and suites big enough to fit the whole crew, you may never want to leave. Dunk the kids in the heated pool after a day at Universal while you relax by the fire pit. Check out all the current offers that include breakfast, late checkout and discounts for military families. Bonus: downtown Burbank is just a few blocks away and offers tons of family-friendly dining options like Shake Shack and Gordon Biersch.